Who got history in my Pokémon game? If the scholastically-inspired setting of Pokémon Conquest has turned you off, check out our quick guide to four of the most awesome warlords.

Sometimes a game comes out of left field and surprises everyone by proving far more compelling than our practised cynicism can handle. This week's topic du jour? Pokémon Conquest. Reviews have been largely favourable and the game is generating significant buzz.

Pokémon Conquest is game in which characters based on well-known historical figures from Japan's Sengoku period are paired up with Pokémon and set out to conquer the nation. It is quite literally a cross between the beloved Pokémon formula of collecting creatures of various abilities and the lauded strategy of the Nobunaga's Ambition series.

It sounds like an unlikely combination, although it makes more sense to those already familiar with the historically-inspired characters. For Pokémon fans coming on board for the first time, the added layer of complexity in the gameplay is quite enough to cope with even before you have to start memorising names, so here's our quick guide to some of our favourite daimyo. 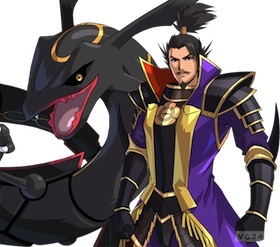 Nobunaga
Oda Nobunaga is the titular character of the Tecmo Koei series Pokémon Conquest spins off from. He is largely credited for beginning the unification of a previously disparate Japan under a shogunate, although he died before the work could be completed, reportedly committing seppuku in a burning temple after being betrayed by his retainer, Akechi Mitsuhide. Despite his impressive military and political achievements - including introducing merit-based promotions and having charisma out to here - he's often villainised. In Tecmo Koei's interpretation, he's depicted as a darkly attractive "demon lord" and secret hero. In other words, he's balls-out awesome. Nobunaga is paired with Zekrom, a Dragon and Electric type first introduced in Pokémon White. 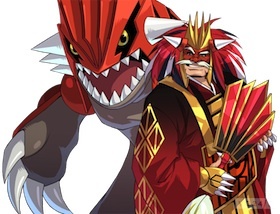 Shingen
Takeda Shingen was known as the Tiger of Kai for his skill on the battlefield. A respected strategist and military leader, he's responsible for any number of tacky tattoos thanks to his use of the phrase "Fū-Rin-Ka-Zan", an abbreviation of his motto "swift as the wind, silent as a forest, fierce as fire and immovable as a mountain" - one of Sun Tzu's catchier offerings. You might remember him from Kurosawa's epic Kagemusha; there's a lot of confusion regarding his death and he may have been sniped from afar. Tecmo Koei depicts Shingen as a cheerful older man who goes constantly masked and horned, a reference to stories of his replacement after death by a body double as well as an allusion to contemporary descriptions of his armour, and makes his rivalry with Uesugi Kenshin a central character development device. Shingen is paired with Groudon, a Ground type introduced with Pokémon Ruby. 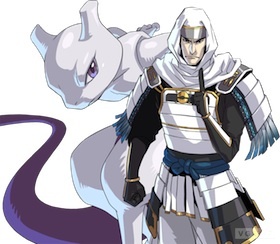 Kenshin
Uesugi Kenshin was one of the hardest of a generation of hardasses and was believed in his own lifetime to be an avatar of Bishamonten, the Buddhist god of war. Called the Dragon of Echigo, he nurtured a bitter rivalry with Takeda Shingen which was probably the only thing which stopped him from conquering the entire country before Nobunaga grew past puberty. He was known as a serious drinker and it's not clear whether he died of the natural consequence of throwing back sake all day every day or whether he was assassinated by a ninja while on a morning trip to the latrine; possibly the only time he was ever caught with his pants down. It may be apocryphal, but Nobunaga is said to have commented "Now this land is mine," when hearing that Kenshin had popped his clogs. Kenshin is paired with Mewtwo, one of the most powerful Pokémon of the first generation, which is quite fitting. 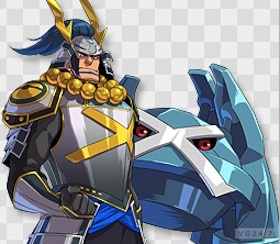 Tadakatsu
Honda Tadakatsu is Tecmo Koei's idea of a Japanese answer to Lu Bu, a warrior of such renown and power that when he turns up on the battlefield the player is expected to crap their dacks. He was never defeated in combat with another samurai, and survived wounds which killed other men. He was called a "samurai among samurai" and other warlords were envious as heck of his boss, Tokugawa Ieyasu, who later became the first shogun of Japan. Did this happen because he had Tadakatsu storming along beside him wearing a sweet helmet with about a metre of antler on top? It's hard not to believe it. Tecmo Koei choose to depict him as layered in steel armour - often with a cool tail - which makes him a perfect match for Metagross, a Steel and Psychic type introduced in generation III as the final form of Beldum.

These four characters are just a taste of the cast of 40 available in Pokémon Conquest; for a handy cheat sheet with link to Wikipedia articles, visit Bulbapedia, and consider checking out some of the dozens of games about the wild, wacky and war-torn Sengoku period.

All this is interesting, but what Pokémon Conquest really has going for it, of course, is the strength of the strategy chops at Tecmo Koei, slimmed down to make it beginner-friendly, combined with the RPG elements which keep Pokémon games at the top of the charts. If the idea of some of the most famous warriors in Japanese history chumming it up with cartoon monsters doesn't tickle you in the slightest, I really wonder what does.

Pokémon Conquest is out now in the US and arrives in Australia this week; a European release has not been confirmed.