A lot has happened since May 2015, eh? Skipping over the politics for a moment. Bowie died. Prince gone. A few YouTubers said unforgivable things. Now we’re all trapped at home, unable to see our families, scared of our own hands. It’s so bad I watched Rise of Skywalker.

For most, the last half decade has been a steady decline – if you’d told me five years ago that was the GOOD BIT then I’d have hit you – but for the Little Guys That Could, CD Projekt Red, it’s been an incredible ascent. A studio that always made good games, but never made a world-changing game. Until it did.

Video games are the silver lining to all this lockdown stuff, for me. It’s the best opportunity to replay The Witcher 3 – a game I already adored – with the time and space to fully appreciate it. A full, comprehensive revisit is something I’ve considered a couple of times, delving into a New Game+ before conking out after a few hours in White Orchard. There was always something else out; something new out. But now there’s nothing else and nothing new. It really is the best time to play a game like this. No distractions. No obligations. No dignity in daily routine. Skip the shower. Don’t get dressed. Gorge on snacks. Become The Witcher. Roleplay the stink and squalor of a swamp-lurking monster hunter with a lack of human emotions and no social skills. Wince when an NPC spits at you. It is perfect. 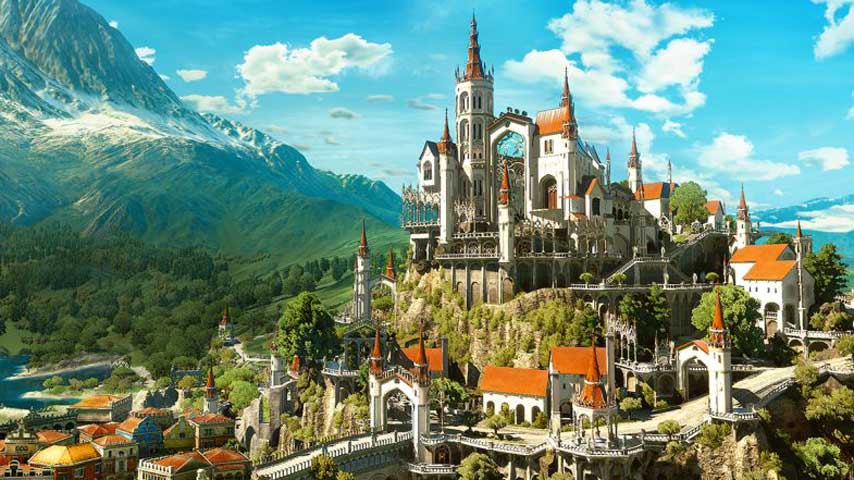 And then there’s WHERE you play it. I play on the PC, mostly. I’ve modded it so it looks like it could’ve come out yesterday. I mean The Witcher 3 still looks very pretty, you should know that if you’re thinking about playing on a PS4 or an Xbox One. But PC is absolutely the best way to get the most out of the world that CD Projekt built. HD upgrades for textures and colour re-shades and lighting mods all go a long way toward making this game look astonishing. But you can also play on a Switch! Five years ago, when you told me that things were going to get really bad, if you’d have told me then that I would be able to play The Witcher 3 for ten-hours straight on my flight from London to Los Angeles... Well, I would’ve hit you again. It might not be the game’s prettiest iteration, but being able to download my Steam saves and continue on the go is a remarkable feat.

The problem with The Witcher 3, if there is one, is that there’s a relatively small number of brilliant moments you remember. The stand out bits. The first time you meet Emperor Charles Tywin Emhyr, actual Charles Dance! The Bloody Baron and his fateful quest to reclaim his family. The Towerful of Mice side quest, where a guy kills himself by kissing the corpse of his dead lover. The bit where you go through space and time (I think the quest is literally called Through Space and Time). The first time you get to Novigrad and realise there’s a whole city on top of the enormous map you’ve just been exploring. The first time you arrive at Skellige and hear that incredible music, and realise there’s a whole fucking continent on top of that other continent. The moment you head to Toussaint and, God, you get the picture.

There are a lot of truly unforgettable bits, is what I’m saying. But there’s so much more that you forget. I found myself doing it while playing. I’m doing it now while writing. Great quest after great quest, fantastic story after fantastic story; so many to remember that it all just coalesces into one in your idiot brain. Replaying it with all the time in the world, putting all the time into this world, has really been the best way to assert it as my favourite game of all time. 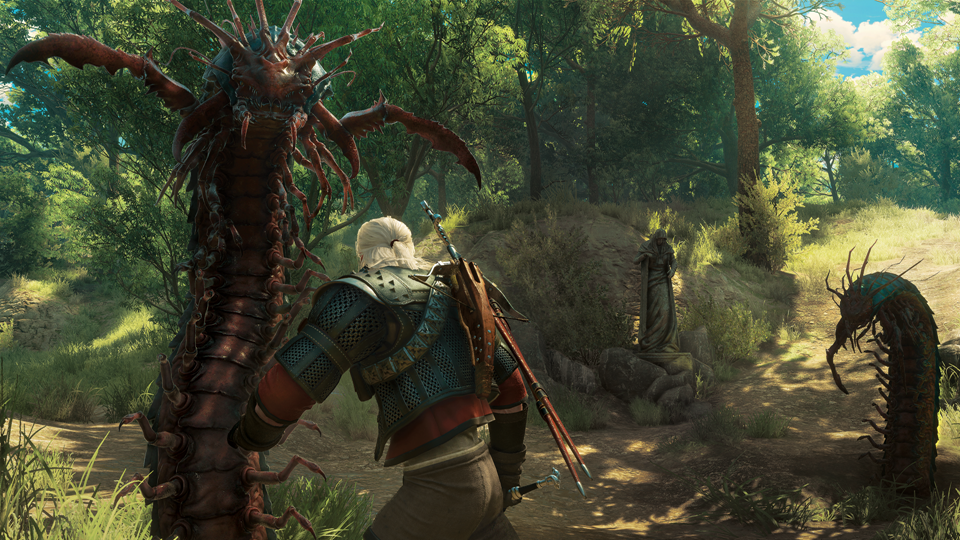 It’s the smaller moments I love. I particularly enjoy the first time you go on a quest with Keira Metz. Wandering in the Dark, it’s called. Geralt’s flirty banter is perhaps at its best with Keira. She’s no Triss, and definitely no Yen, but the sexual tension with Geralt is at its best with Keira. You head into an abandoned elven ruin, in pursuit of the Wild Hunt, only to find all manner of traps, puzzles and mysteries. I remember playing it for the first time and thinking fuck, Skyrim is beat. And playing it now I realise that no open-world RPG has surmounted it in that sense of crafted adventure. Everything feels purpose built and never cut-and-pasted. It says a lot that Fallout 4 came out the same year and just never stood a chance.

There’s the wonderful little side-quest where you uncover a conspiracy where a dwarven blacksmith, legendary for his craft, is actually not so legendary at all. That intersects with a brilliant Skellige adventure where Geralt and his gaelic pals hunt down an enormous giant on the island of Undvik. And these intersections just feel so natural throughout. The writing of every character is brilliant. I can’t remember ever spending any time in a character journal in a video game. In The Witcher 3 I consult it regularly, always checking for updated character logs and rechecking when I come across new people. And there are dozens of them. All of them are interesting. All of them are different. None of them are superfluous.

One bit I loved revisiting was the Get Junior storyline. Junior is probably the most hateful and disgusting character in all of The Witcher 3. A good and traditional cunt to rival Joffrey in Game of Thrones. Every scene he’s in, he’s awful, but in such a grotesquely fascinating way that you can’t help but enjoy watching him. Needless to say, having the chance to murder him again was one I totally relished. 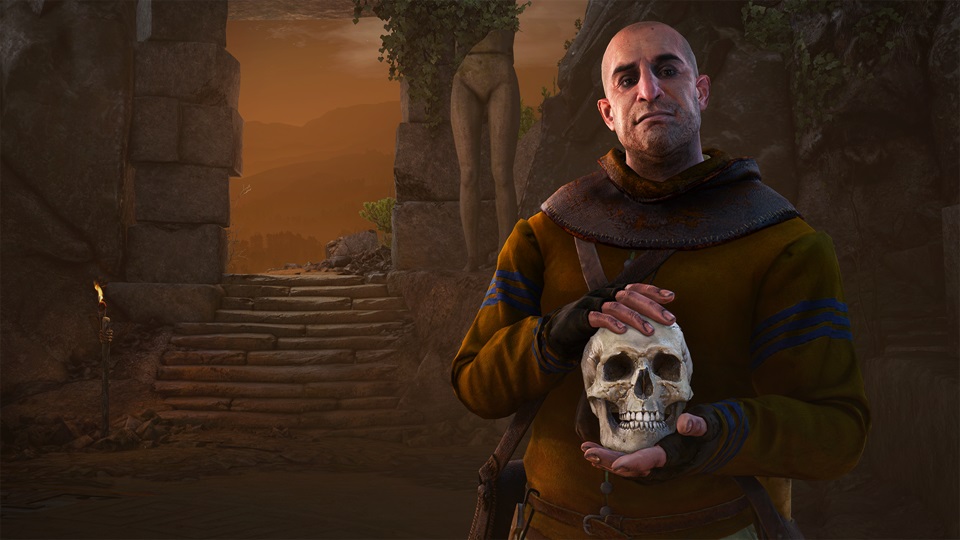 I’ve also always loved the fact that one of the best questlines – maybe the best questline – is the Hearts of Stone expansion. I think it says a lot about The Witcher 3, and CD Projekt Red in general, that a DLC chapter that probably only a handful of players actually played features one of the most artfully written stories in the whole thing. Everything in this game is top quality and nothing feels tacked on. It was one of the quests I jumped straight into as soon as I could. Gaunter O’Dimm is just so, so menacing. Even now. I thought he might have lost some of the sinister edge, but he really hasn’t. Pushing a spoon into someone’s eye? Delicious.

I talked about Skyrim a bit earlier and I think, ultimately, The Witcher 3 made me realise I never want to play a blank-slate RPG again. Video games are at their best when they rely on writing rather than silent roleplay. Yes, give the player agency, but inhabiting that fully fleshed out personality is the best. It’s what makes the Witcher’s contract quests just so unforgettable. Smart writing masking familiar, even formulaic mechanics. You overlook the fact you’re following the same scent trails and running through the motions from time to time, because the motives and the mysteries are all there, masterfully crafted with strong writing and – mostly – great acting. 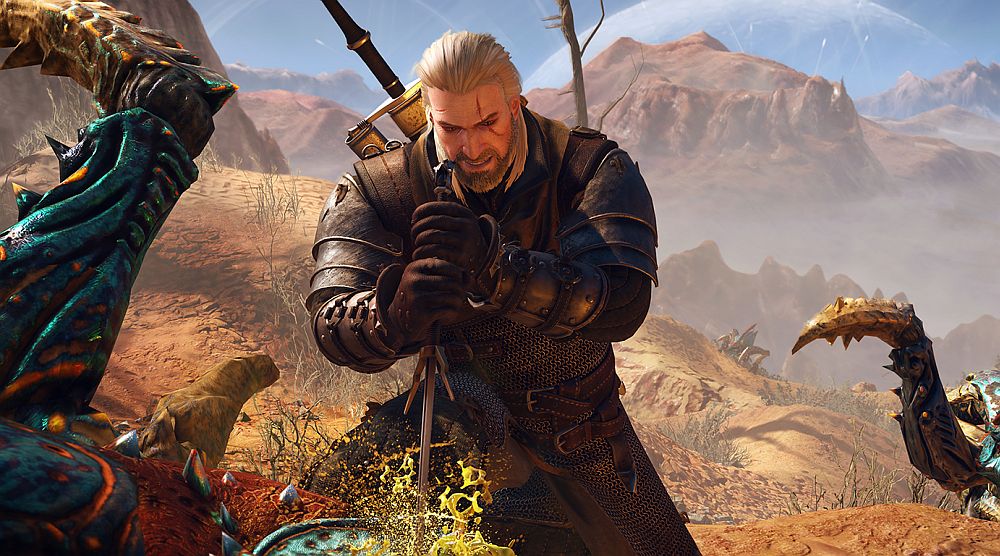 Some people hate the combat system. I, personally, never understood that criticism. Sure it’s a bit flaily. But I’ve been playing Assassin’s Creed Odyssey recently – another game with swords and monsters and a few magic spells – and for my money, The Witcher 3 does crowd control much better. There’s less fumbling around with the controller trying to attack the person you want to attack. Finishing moves feel brutal. You get that sense of being an expert swordsman and the magic powers feel more potent. I like how they’re focused on five unique abilities that you can upgrade and tweak, ever so slightly, depending on your playstyle.

And then there’s Blood and Wine. Ahh, Toussaint. I’m still playing through the game’s biggest, sunniest expansion, actually, and it really is the most beautifully perfect send-off for Geralt. Regis is a wonderful last companion to see the adventure off with. Wise. A real friend. There’s no second guessing with Regis, just a proper bromance. And, of course I want a Witcher 4; who in their right mind doesn’t? But if CD Projekt Red were to decide to leave it here, I wouldn’t mind at all. Geralt is where he should be, relaxing in his vineyard at Corvo Bianco, his job done, and I’m perfectly happy with that. He’s in his happy place, and when I play The Witcher 3 I’m in mine.