The voice actor, most famous for his performance as The Witcher, Geralt of Rivia, had moved on with his life after the original Witcher game released and was met with mild acclaim. Eventually, a sequel, The Witcher 2: Assassins of Kings, was greenlit by developer CD Projekt. None the wiser, Cockle received a phone call from an actor friend of his.

That person then got in touch with the game director and told them the actor was eager to reprise his role. The director listened to some of his work on the first game and liked what they heard, and so Cockle returned as Geralt for the sequel - one of only two original actors to reprise their roles.

In the first Witcher, the after-effects of this process are still very much visible in Geralt. He’s reserved, always calm, and he sees everything logically. He doesn’t let his feelings get in the way. But as the series progressed and Geralt grew older, his soul - long-since scabbed over - began repairing itself.

“When we did The Witcher, CD Projekt were adamant that he could have absolutely no emotions whatsoever,” Cockle tells me. “I did that as well as I could, but being an actor - that’s what we do, we play with emotions.

By the time the second game came around, CD Projekt decided to relax the rules a little. To stand out, this next game needed a heart that wasn’t encased in stone. It needed to have more personality, and it needed to tell a more personal story with characters players could relate to - even if that character is a sad bridge troll with a drinking problem.

“What you can see in the progression from The Witcher right through to The Witcher 3 is a progression in the writing, but also in terms of Geralt and how close to the surface his emotions are,” Cockle says. “I think by the time we get to the end of Blood and Wine, he’s almost a different character. He’s sentimental and he’s expressing his care for the people around him in a way that he didn’t in the earlier games.”

Blood and Wine, the final expansion for The Witcher 3, is about as misty-eyed as add-ons get. Geralt is working on a contract in the far away land of Toussaint, and it takes this separation for him to truly appreciate the people close to him. He is there on a mission, but he is also on the verge of hanging up his silver blade and sacking it all in for a life in his newly-acquired vineyard.

"By the time we get to the end of Blood and Wine, he’s almost a different character. He’s sentimental and he’s expressing his care for the people around him in a way that he didn’t in the earlier games." 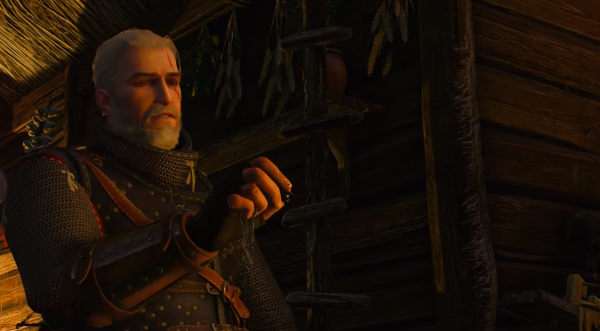 “There were always times as well where I’d go in for pick ups to re-record lines and the direction would be, ‘Not so much emotion’. So even then I’d sometimes push it too far for CD Projekt’s liking. But that’s what it’s all about - it’s about compromise and finding what’s best.”

Cockle himself has been along a similar journey to Geralt. While recording Geralt’s lines, he was also teaching acting at the Arts University, Bournemouth. He would often work 60 hour weeks at the school, then he would go to work in the recording studio for the entire weekend as a ronin performer. Last year, it all became too much and he had to make a decision.

“I was starting to really feel the weight on my body and soul from the job itself, which was full on, and also still doing professional acting - I was unwilling to give that up entirely,” Cockle says. “I had a conversation with my wife and I decided I needed to do one or the other: just teaching, or just acting. After much deliberation, I decided to leave the teaching behind. I honestly think if I’d stayed with the teaching and given up the acting, I would be a less happy person. If I had to give up the acting altogether, I think some part of my soul would have died.” His own personal Trial of Grasses.

If Geralt ever did hang up his sword to toil in a vineyard, I couldn’t ever see him stopping helping people altogether either. Townsfolk would hear tales of the legendary witcher and bring their troubles to his door. Geralt would sharpen his blade, slip on his chainmail, and whistle to Roach before setting off to help them. It’s not something he would leave behind entirely - he likes gold, but he gets something out of helping people as well.

While Geralt has quite clearly grown through the series, Cockle has changed in tandem with his virtual self. Speaking to him is almost like talking to the witcher - these days Cockle’s voice more naturally slips into the grizzled growl of the white-haired warrior, no doubt due to the years of playing the part.

“I like to think that actors, as they get older and do more things, develop a level of depth that they perhaps didn’t have when they were younger,” Cockle says. “It’s a part of growing older and experiencing more things in life. But I think that’s also true with acting - the more you do it, the more you understand how your own process works and how you personally slot into any given role.