When Nintendo announced the Super Mario Maker 2 Story Mode, my reaction was something like: "Of course. Okay. Cool." What I'd forgotten was this is Nintendo - and so rather than just cramming in a bunch of levels, the story mode actually functions as a brilliant stealth tutorial for the creation-based bulk of the game.

The story justification for the mode is there, for what it's worth. Princess Peach's castle has been destroyed, and Mario must now pay for it to be rebuilt by going on coin-grabbing adventures through different levels. Toad is now the Taskmaster and assigns you new levels to visit, while Toadette is now the chief, bossing around the others on the building site to get things finished once you tell her what to build next. It all takes place in a 3D space, too, presumably using some of that Mario Odyssey tech. While I didn't see much of the castle, one presumes you'll eventually be roaming around a Mario 64 sized Peach's Castle.

Every level available to you has a one-off coin bounty associated with simply beating it for the first time, though for grinding purposes you also get to keep any coins collected within a given level every time you play it. The castle comes in chunks, so you decide what order to build it in, each unlocking a new set of levels.

That standard touch of Nintendo magic comes in once you actually boot into a level for the first time and realize the dual purpose each of the 100-plus stages serves: they're course creation tutorials as much as they are Nintendo-built Mario levels for solo enjoyment.

Early on you encounter levels that show you the potential of the on/off switch mechanic that's new to Mario Maker 2, for instance. This level doesn't just show you how the switch can be used for interesting platforming action, but also how it can be used to kill enemies or create puzzle sections for bonus items. Speaking of puzzles, within the first few stages the game gleefully showcases a lock, door and key driven Ghost House puzzle course that's just as good as any in Super Mario World.

The design of your typical good Mario level is ever-present, but there's a slight tweak to Nintendo's approach where levels are for the most part clearly built around showcasing how the mechanics available for building in Mario Maker 2 can be used in creative ways. The early levels I played mostly focus on one idea at a time, but it seems fair to assume that the game will ramp things up with challenging gauntlets that use multiple systems and parts in unique ways. I can't wait to see where the later levels go. 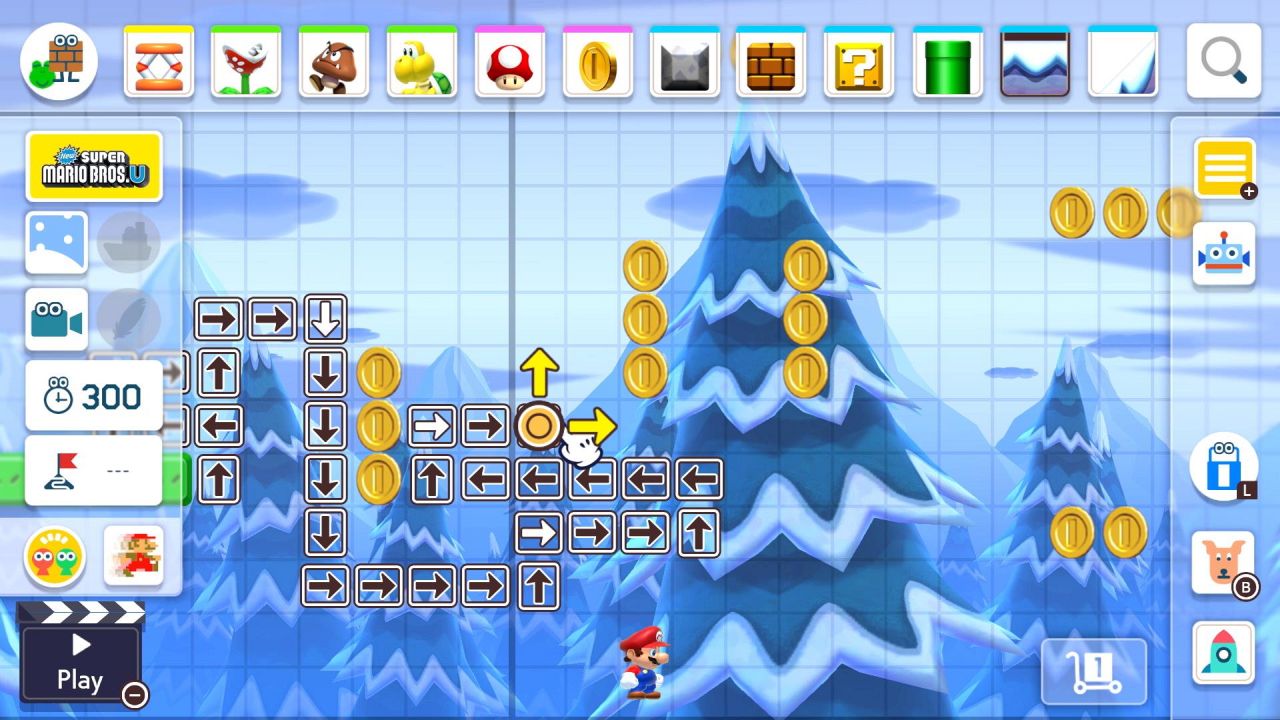 The story mode is clearly there to placate people who aren't as into building, especially for those moments when an internet connection isn't available for downloading new stages - but the execution means it'll be useful for everyone, and will hopefully serve as an incentive to spur on even more master level creators than there were in the previous game.

The rest is, y'know, so far, so Mario Maker. The creation tools are back in full, and Nintendo tells us that "almost everything" will be unlocked from the start, meaning no irritating grind to get key components. Level creation is absolutely at its best on the touch screen, undocked - though if you must do it docked there's a decent, if fiddly controller-based implementation. I struggled with it, but it seems like the sort of thing that'll be much easier to use with a bit of practice - Nintendo employees were zipping through it at speed.

Obviously there's a bunch of new stuff - new course elements (including slopes, the angry sun, snaking blocks and a swinging claw that feels more like something out of Sonic), new backgrounds (Forest, Sky, Desert & Snow Themes) and new settings (raising & lowering water levels, auto scrolling options, completion objectives) - if you wanted more Mario Maker, this is definitely that. There's also a new theme - not Super Mario Bros. 2 USA (boo!), but instead Super Mario 3D World, where objects and power-ups from that 3D game are given a 2D twist. So different is this mode that it stands apart from the other themes, as it works quite differently. It's great fun to toy around with.

Even course world, the online portal where you upload and download levels to and from other players, has been subtly tweaked. There's more filtering options, and levels can now be liked or booed. Likes are shown, but boos aren't - they'll work alongside likes in the background to help determine if a level should be served to more people or not. 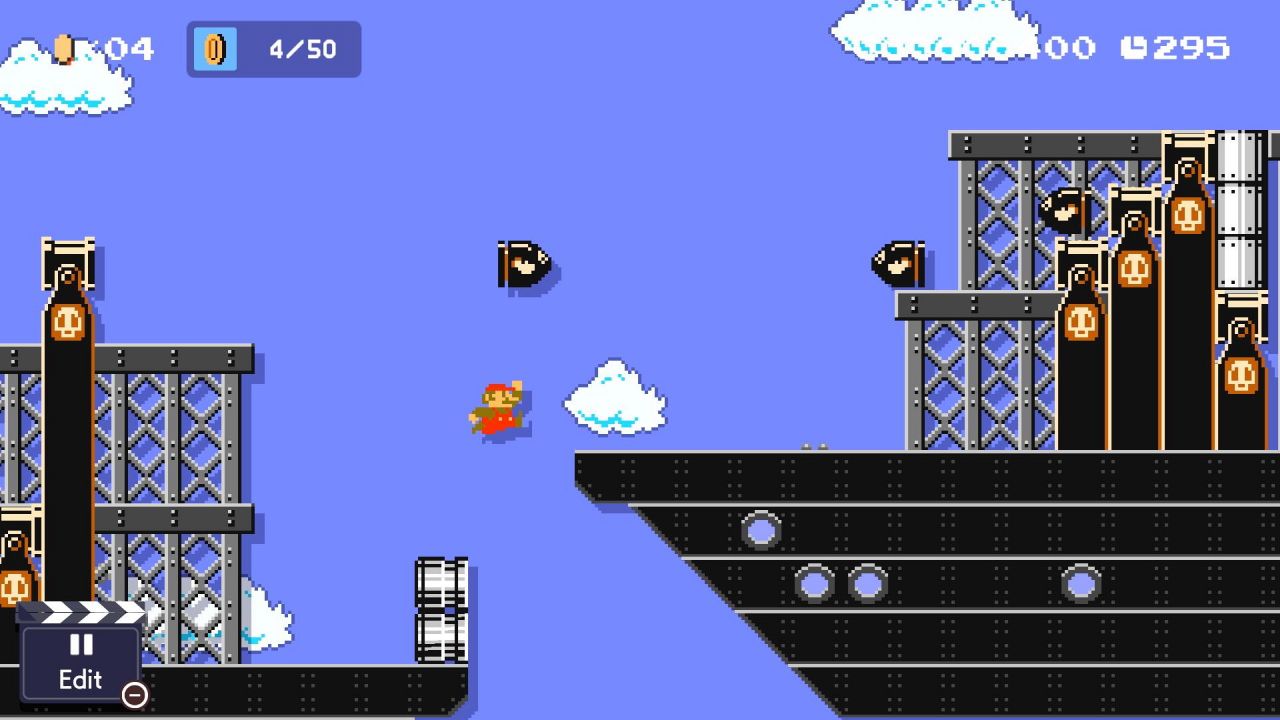 The icing on this bottomless Mario experience is multiplayer, which takes on the same joyous up to four-player chaos as the console-based New Super Mario Bros. games. Level objectives really come into their own here, too - a multiplayer race is one thing, but what about a race where you can't pass the goal until you've collected 100 coins, or defeated a certain number of enemies? These can even turn a level into a puzzle, like an objective to kill a Goomba in a seemingly unreachable spot. It's clever stuff.

I played this with some other press, and it's honestly a hilarious, stressful joy. You'll laugh, swear and cheer with the right group - which was how my hands-on went. Another group at the other end of the room was quieter and more serious, focused on the race. Mario Maker is esports now, I quipped - except, no joke, a tournament of skilled players completing impossibly hard levels would probably be a great watch. You can play multiplayer with just a single joy-con, too, but don't be silly - you want that pro controller d-pad for 2D platforming.

Nintendo doesn't often do truly iterative sequels - usually you have them throwing out almost everything from the previous game and starting over even if the end result feels familiar. Like Splatoon 2, Mario Maker 2 is proof again that they can do the iterative sequel thing well - as it looks like a truly definitive version of this game's excellent core concept.

Super Mario Maker 2 is out on June 28. Hopefully after it releases we can get that Super Mario Bros 2 USA (Doki Doki Panic) style and toolset as DLC. Come on, Nintendo. I want to throw turnips.