Cody Travers may be Metro City's mayor, but that doesn't mean he can't handle himself in Street Fighter 5.

If you're a Street Fighter fan, you probably know its backstory can get pretty strange at times. Take Cody Travers, a character from Capcom's Final Fight brawler series who somehow made his way into the Street Fighter roster.

Now Cody will return to Street Fighter, but with a twist - this time he's Metro City's mayor.

Cody previously appeared in Street Fighter Alpha 3 and Super Street Fighter 4, where his character arc was to be constantly thrown in prison because of his love for conflict. Everything changes when Final Fight's Mike Haggar exonerates Cody of his crimes, leading the character to become mayor of Metro City. Unfortunately, Cody can't quite separate the brawler from his politician, which means he resolves disputes with a direct approach Haggar would be proud of.

According to Capcom's official statement, Mayor Cody's move set is similar to past outings but tweaked to fit a "spiffy style". As such, Cody can no longer throw rocks or cut loose with a Criminal Upper, but uses a Tornado Sweep that unleashes wind like Ryu's fireballs. Cody also has new combos, some of which make use of his trusty knife and pipe.

Cody also comes with costumes reflecting each parts of his journey from brawler to mayor. Along with his standard outfit, you can equip Cody with a Mayor Haggar homage, formal wear for public events, a prison uniform, and the classic Final Fight costumes. Cody's Battle costume - the formal wear - is included if you purchase him with real money or as part of the Season 3 Character Pass. 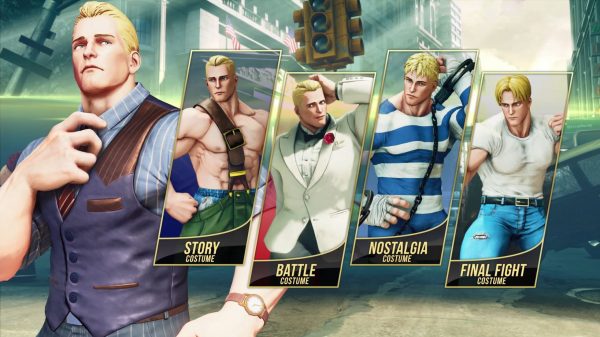