As Sony launches Wonderbook, Stace Harman speaks to those behind the project about its seven-year gestation, its target audience and the software line-up that will make or break it.

This week, Sony’s launches its new augmented reality peripheral, Wonderbook, alongside its first piece of software, Wonderbook: Book of Spells, written by JK Rowling. Squarely aimed at a younger audience, both the peripheral and its debut software title hope to deliver on the potential of AR and offer bereft Harry Potter fans a chance to delve back into the rich lore surrounding Hogwarts. To mark the occasion, Sony recently held a press event in London to demonstrate the concepts and technology at the heart of Wonderbook and to discuss the origins of a project seven years in the making.

Once upon a time 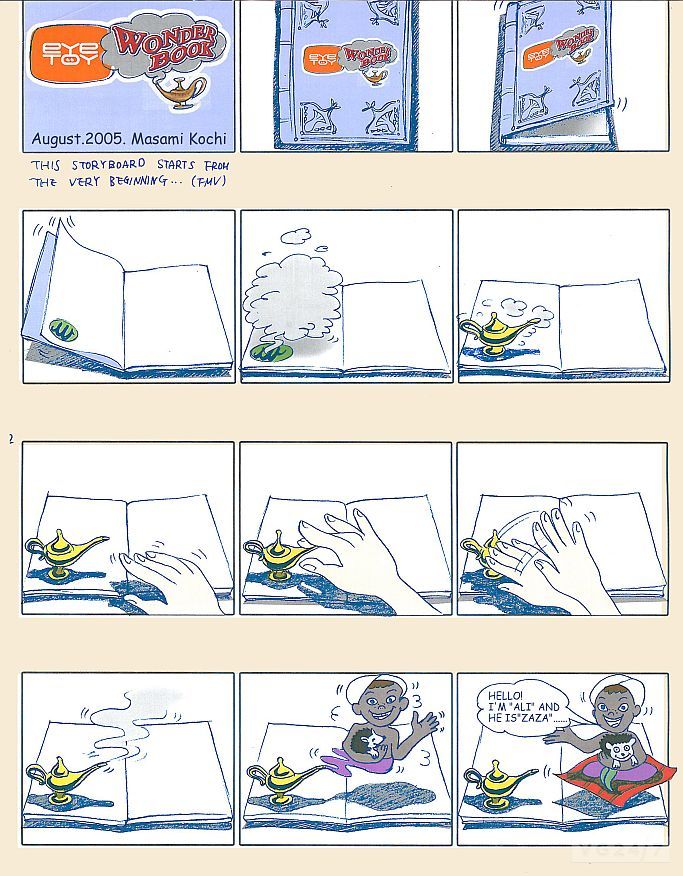 The Wonderbook itself is distinctly low-tech, constructed of traditional paper and card pre-printed with the telltale AR symbols. The broader Wonderbook concept, on the other hand, highlights the technology-powered evolution of Sony’s work with augmented reality and combines the motion tracking of PlayStation Eye with the interactivity of PS Move. Despite its reliance on other PS3 technology, the notion of Wonderbook pre-dates both its component peripherals and even its host platform, as SCEA Art Director, Masami Kochi explains.

“Back in 2005, when I first saw the early augmented reality technology I thought, ‘Wow, that’s something that could really go far in the future’,” Kochi remembers. “I started thinking about how it could be used with more powerful technology like PS3, which wasn’t out yet. I had the idea of using AR in conjunction with a book that anyone can play and so you open the book and the fantasy becomes a reality.”

Kochi’s initial design sketches bear a striking resemblance to the finished product that Sony hopes will deliver on this key message. Similarly, Book of Spells aims to turn the magic of Rowling’s fantasy world into the “reality” of hurling fireballs around the living room. Each chapter in Book of Spells introduces new magic and offers an origin story for how each spell was discovered. Many of these anecdotes are delivered by way of a charming, interactive paper theatre, and it’s likely that Potter fans will delight in playing an active part in Rowling’s rich fiction.

So far, so child-friendly, but for the Muggles for whom Potter holds no allure, or for the adults and older siblings stuck on the sidelines as young spell-casters commandeer the TV, relief comes in the form of a wise-cracking, bookworm private detective. 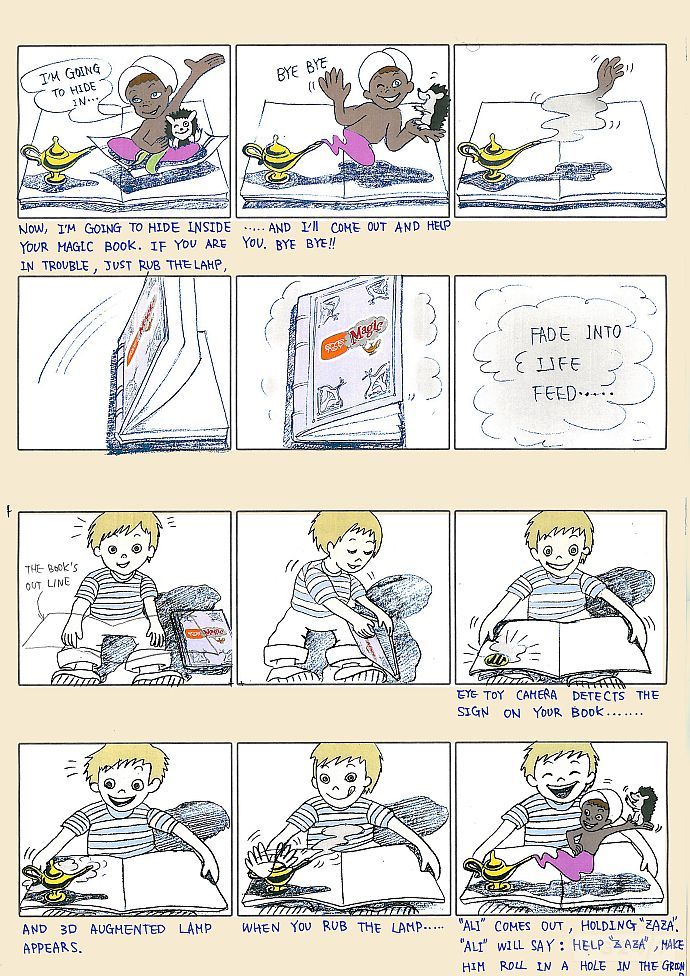 Diggs Nightcrawler is a new IP formed in collaboration between Sony and Oscar-winning animation studio, Moonbot. Set in Library City, private eye Diggs has been framed for the murder of one Mr H. Dumpty, who has taken a fatal tumble from a towering edifice. Diggs Nightcrawler casts the player in the role of private detective’s assistant as the PI attempts to piece together the fractured clues of Dumpty’s demise, all the while avoiding the long arm of the law played by the Three Little Pigs.

Its film noir setting borrows thematic elements from Dashiell Hammett’s 1930’s classic, The Maltese Falcon, while the world is rendered in an Edward Hopper inspired palette, but it’s Diggs’ humour that does most to extend its appeal beyond its 7-11 target audience. A number of knowing in-jokes and a cast including the Three Wise Monkeys as nightclub bouncers and Ms Itsy Bitsy as a stage siren have the potential to entertain a wider audience.

Diggs: Nightcrawler also flies the flag for the myriad ways in which Wonderbook can be interacted with. While Book of Spells appears to provide a more straight forward interaction between Wonderbook and TV via the wand-like Move, Diggs looks to provide numerous ways of interacting with both the new peripheral and the game world. Rotating the book to search behind 3D buildings, tipping it to change the angle of an overhanging street lamp and shaking a cluttered scene clear of debris all hint at the varied techniques that can be effectively employed by Wonderbook.

“There are some more complex things that we could do but we wanted to focus initially on some key interactions that we know work and are simple to explain,” offers Dave Ranyard of Sony London Studios. “It’s a balancing act, we could put twenty different ways of interacting with the book but I think for early titles we’ve got around ten in order to strike a good balance.”

This notion of balance extends to the software content too. The third Wonderbook title on show offers a foray into the Jurassic era with BBC’s Walking with Dinosaurs. With its subtle blend of giant reptiles and associated facts and theories, Walking with Dinosaurs looks as though it may achieve that elusive goal of making a piece of educational software that’s engaging and entertaining.

Despite the positives of Wonderbook, there is a cloud blotting its storybook blue sky. The technology appears solid and intuitive, the concept is familiar to anyone who has ever opened a book and the entry price is reasonable. That said, Wonderbook’s happy ending is far from inevitable and much of its future success and the rate at which it will be adopted depends on timing.

The making of Wonderbook: Book of Spells

Primarily, this is matter of how frequently software will be delivered. Of the three Wonderbook titles discussed here, only Book of Spells is due to launch this side of 2013. The announced partnership with Disney could yield many joyous unions and provide recognisable characters that have kids bringing to bear the marketers’ dream that is pester power. However, with Wonderbook launching this week, there’s no word on what these titles may be or when they will be out.

Sony is remaining tight-lipped about its future titles, with neither Diggs Nightcrawler nor Walking with Dinosaurs yet carrying firm release dates. The end result is a promising peripheral with just one software title for the foreseeable future; a future that includes the lucrative festive period.

Ranyard insists that there is a “robust roadmap” for software releases and so given the promise shown by the three titles on display, it’s a shame that nobody is talking specifics. The potential of Wonderbook is apparent, but a question mark hovers over whether it will suffer the ignominy of gathering dust on the book shelf due to a protracted release schedule.

For Sony to conjure up a happy ending, it needs to ensure a steady stream of Wonderbook titles lest its claim of “one book, a thousand stories” be exposed as a work of fanciful fiction.