Nier: Automata was released in Japan earlier this week, and some players have taken offense to an item considered trash in the game. 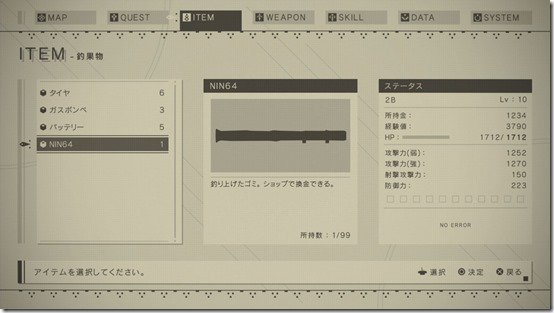 According to a post on Japanese site jin115, Nier: Automata players took to Twitter to express their displeasure over an item called "NIN64" which is added to the character's inventory as a trash item.

Nier has a fishing mechanic which can result in the player catching rare items, and in other instances trash - which is pretty standard for any game with a fishing feature. However, some players think the NIN64 item being called trash by the game is a slight to the Nintendo 64 console.

Apparently, enough people complained because the game's producer, Yosuke Saito, said Square Enix plans to “change the name of an item you’ve all pointed out." The name change will be included with the upcoming patch which also fixes some game bug.

As Siliconera points out, the game takes place 10,000 years into the future, and it's more likely than not a fun little Easter egg paying homage to a popular gaming system that's still floating around (no pun intended) 100 centuries later.

The site also notes not all players in Japan think it's a Nintendo reference, but a play on the MIM-46 Mauler which was an anti-aircraft missile system used in the 1950s.

Nier: Automata will be released in North America on March 7 and Europe on March 10 for PS4. It will also come to PC at a later date.