Sniper Elite 3 gives players freedom to stealth their way to stylish kills across the sandbox of war-torn Africa. VG247's Dave Cook speaks with studio CEO Jason Kingsley to talk about the next-gen project.

Sniper Elite 3 is developed by Rebellion and has been announced for a 2014 release on PC, PS4 and Xbox One. It is the sequel to 2012's Sniper Elite V2.

The game was announced in March and Rebellion offered some scant details about what new improvements will be made to the formula. Check out our reveal coverage here.

There's even a mad Sniper Elite spin-off called Nazi Zombie Army that you can buy right now on Steam. Check out all the details here.

I've harped on long enough about why stealth is empowering on VG247.

The predatory approach really does make you feel superior to your prey, and few things are as rewarding as finishing a mission without being spotted once. It's hard-earned, but so utterly gratifying.

Rebellion knows this all too well, but is broadening its scope with Sniper Elite 3, it's first next-gen project. Bigger sandbox environments are the key, offering players a wealth of vantage points, routes and ways to either skirt around or place bullets in an obstacle as they see fit.

Leaving the carnage of Berlin behind, the series has now shifted focus to the North African campaign of World War II.

I asked Rebellion CEO Jason Kingsley if the team felt pressured to modernise the series, given the dominance of Battlefield and Call of Duty in the shooter arena.

"These trends are cyclical. A few years back it seemed the industry was obsessed with World War II shooters," he told me. "Maybe it’ll swing that way again.

"We don’t concern ourselves with trying to follow a trend, we are just striving to make the best WW2 sniper experience possible - for ourselves, and for those people out there who love the genre as much as us.

"Sniper Elite 3 takes place among the varied exotic locales of the North African theatre of WW2 which has not been extensively explored in games but was actually historically pivotal to the whole conflict." 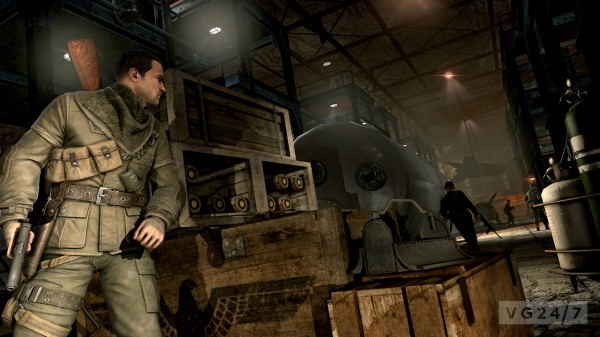 Rebellion's effort in Sniper Elite V2 showed that it has a keen eye for creating large open areas that threw up multiple ways to complete objectives. It was a refreshing change from the corridor nature of the genre, and although the game didn't have the aesthetic clout to roll with DICE and other teams, I for one found it to be an enjoyable stealth experience.

"We want you to feel you’re dealing with scenarios that are believable and that you can genuinely make meaningful choices on how to tackle them," Kingsley said of Sniper Elite 3's broader scope. "If you are sniping at the enemy from a concealed position, that should play out in a plausible fashion - the enemy won’t spot you immediately and even when they do figure out which direction they are being shot at from, they will still have to figure out how to flush you out.

"We don’t want sniping encounters to degenerate into predictable duck-shoots where all the AI are shooting directly at you while popping in and out of cover. Encounters with the enemy will be convincing and tense, and we will give you both the space and the tools to tackle them with whatever balance of stealth and gunplay suits you best.

"Many players are becoming a little tired of being rail-roaded down a cinematic scripted linear corridor of relentless Michael Bay-style explosive action as their health constantly recharges even as they are being peppered with hundreds of bullets.

"Don’t get me wrong, that can be a lot of fun, but we are offering you the opportunity to show you can be a complete badass by taking control of a situation, rather than passively riding a roller coaster straight through it." 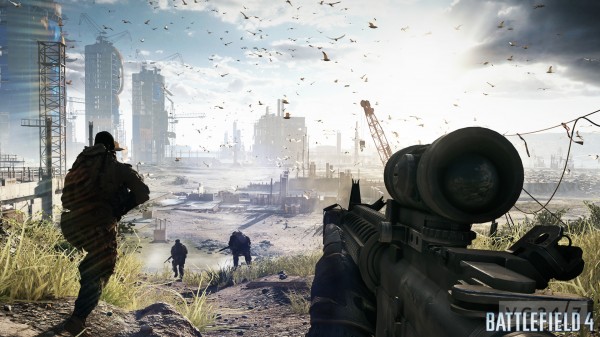 Do games like Battlefield 4 offer a different kind of empowerment? You be the judge.

It's an approach that goes hand-in-hand with the stealth genre at large. Consider other darlings of the circuit - Metal Gear Solid, Dishonored and Tenchu spring to mind - and the way they deliver freedom of expression and tactical choices to the player. Rebellion could really capitalise on the sandbox approach if its environments are crafted carefully enough, and it's clear from our interview that it's a challenge the studio has been mulling over in great detail.

"We could discuss the game design of great stealth play at great length – as, in fact, we do in the studio," he explained. "If you take a look at some of the most successful stealth games out there, I think you will find that there are definitely some key elements common to all of them.

"The player must be empowered to observe and analyse a location and the enemies within it without being spotted while making a plan of action. Then they should have enough skills and tools at their disposal to be able to express their own personal playing style in carrying out that plan. Sniper Elite 3 will follow that approach, while bringing its own particular flavour to the genre."

Last year, Rebellion released Sniper Elite V2, a reworking of the original Sniper Elite that built upon what the team had learned over the years. While the first game was a solid experience, the new version went a long way in honing the stealth mechanics driving the series. 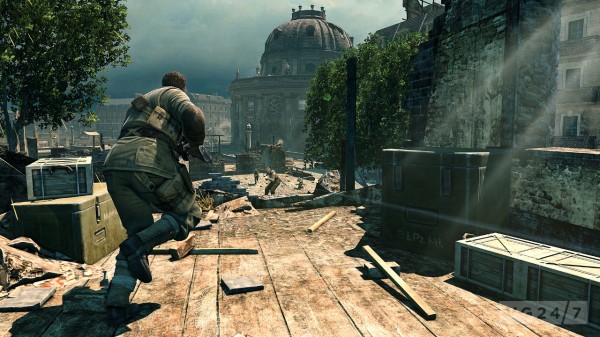 Sniper Elite V2 wasn't perfect, but it's a strong enough foundation to build on.

I asked Kinglsey to reflect on how development of V2 will drive Sniper Elite 3. "We are proud of the quality of the sniping experience we were able to deliver in V2," he stressed. "Audiences have unanimously let us know what a satisfying experience it is to line up and pull off an accurate shot. We are also very pleased with the attention to detail we were able to bring to recreating an authentic WW2 experience.

"The atmosphere is a key part of the Sniper Elite experience. There are of course many things that we believe we can - and should - improve upon, including those things we things we succeeded with last time around. This time we are putting much greater focus on finding ways to make the player’s experience truly their own. It will be up to them how they approach objectives – whether silently and with precision -or killing everyone they meet along the way."

Should the game truly offer this freedom across a wide range of vast, open locales then we could be looking at the pinnacle of the series so far. Although Rebellion hasn't shown the game running to the press yet, the prospect of such an ambitious stealth shooter has me keen, but I - naturally - had to close our chat by asking about the team's experience with PS4 so far.

"Naturally, we’re excited to be developing Sniper Elite 3 for the PS4," he concluded, "and how helpful Sony continue to be in making sure that development for their hardware is as straightforward as possible. Sniper Elite 3 is going to look and play fantastically on PS4 of course, but it’s a little early for us to reveal anything specific."

No worries. There's plenty of time for that. But for now, are you excited for Sniper Elite 3? Did you enjoy V2 or the original? Share your thoughts with us below.