Rime’s gentle puzzles and gorgeous vistas ease you in before it opens its heart. 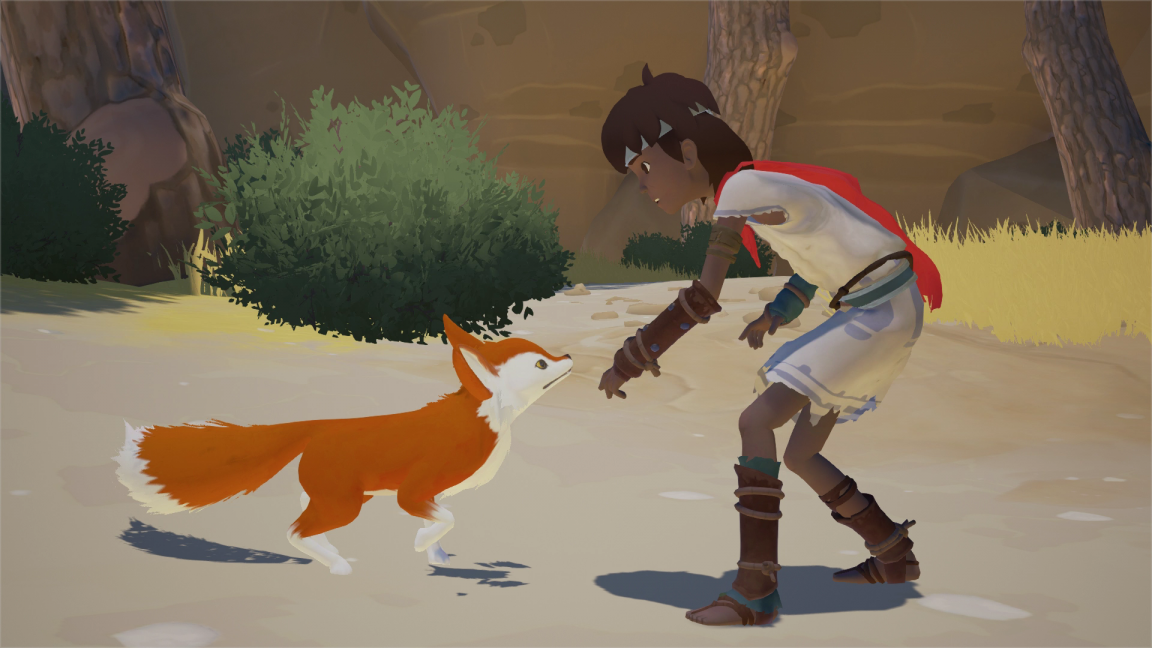 "Rime gave an ending sequence that - on an emotional level - absolutely kicked my arse."

I would like to propose a new genre classification for games like Rime. It’s ostensibly an adventure game where you solve puzzles, but that doesn’t quite sit right as a way of classification. The red cape of the protagonist is an obvious nod to Journey, a game Rime often evokes, but it’s more involved and cerebral in terms of progression. In my head, I’ve settled on thinking of this as a ‘push forward’ game – there’s no combat and only minor adversarial encounters, but unfurling the game’s world, taking each step forward and travelling through the game experiencing its design, is where pleasure comes from.

While Rime is littered with collectables, it’s the journey forward, the propulsive sense of heading towards something, that matters. The dominant metaphor in the game’s marketing has been a giant tower; the implication is that the game is about reaching the top of that tower, taking in whatever that means along the way, claiming whatever victory that represents. The game is about pushing forward, just as Abzu and Journey were before it – but as far as I’m concerned, Rime has more sense of purpose and pleasure than either of those two (although I should note that I hold the somewhat controversial opinion that Journey is merely fine).

Rime presents the player with a journey that they are mostly uninformed about. It’s only in the game’s amazing final half-hour that it clicked with me what the game was ‘about’, but that hadn’t mattered too much up to that point. You play as a young child (who read as a boy to me, but the character design is intended as gender-neutral) that awakens on a beach, with no further details given about who you are or why you’re there until much later in the game. You know that the tower on the island you’ve awoken on has some significance, but only because this is a game, and it’s right there, so it surely must. A fox appears as your guide, warping in and out of the path ahead as you go on your adventuring, guiding and yipping adorably. Rime’s five main areas are large and open, and figuring out the way forward is often a case of deciphering the world’s iconography to figure out where it is leading you. Having an adorable guide helps. 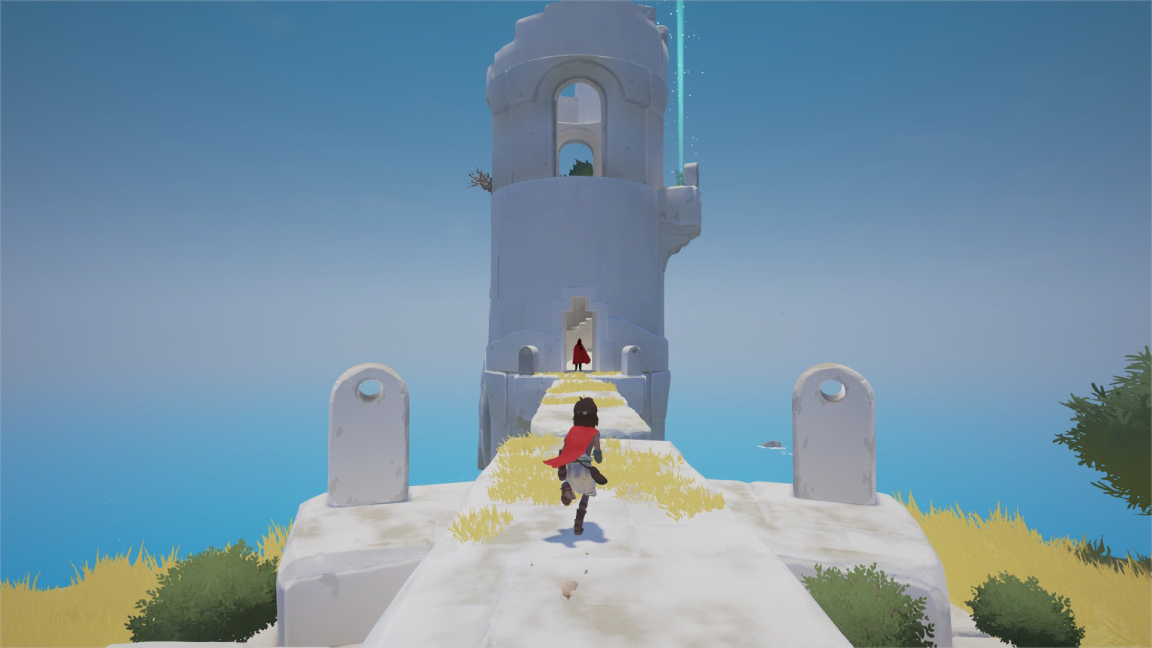 Your interactions with the world are simple, but often powerful. Most of Rime’s puzzles are navigational – how do you figure out where to go next, and then how do you get there? The protagonist can climb, Nathan Drake style, and most ledges and surfaces that can be grabbed are handily marked. They can also swim underwater for extended periods, jump remarkably far, and interact with environmental objects. The game’s puzzles are all pretty simple, mostly revolving around moving objects around rooms in the right pattern, or manipulating objects until they cast a shadow in the right place. Occasionally you can enter a first-person perspective and move the camera to make symbols you encounter in the world overlap with one another, causing changes within the world. These actions are aesthetically satisfying – the puzzles may not be overly creative, but their presentation often is. Rime is an easy game by design, one that the developers clear want everyone to be able to finish, but that doesn’t stop it from being clever.

For seven-odd hours I guided the child through scenes of beauty, scenes of collapse and carnage, through underwater caverns and open fields and weird rooms powered by glowing orbs. I pushed forward, always excited to see what would come next, hoping for – but increasingly sure that I would not get – a better sense of the character’s mystery. Rime is the kind of experience that you need to let wash over you without thinking about it too deeply – enjoy the sights and the sounds, but don’t worry too much about ‘interpreting’ it. The experience of the journey is the important thing here, although some parts are more enjoyable than others. There’s a large section of that game where a giant skull-faced bird stalks you, swooping down and grabbing you if you spend too long out of cover, which presents a tension that felt at odds with the rest of the game’s more relaxed attitude to exploration. Dying in Rime is the most minor of inconveniences, though – if you drop off a ledge, for instance, it’ll respawn you immediately back where you dropped. 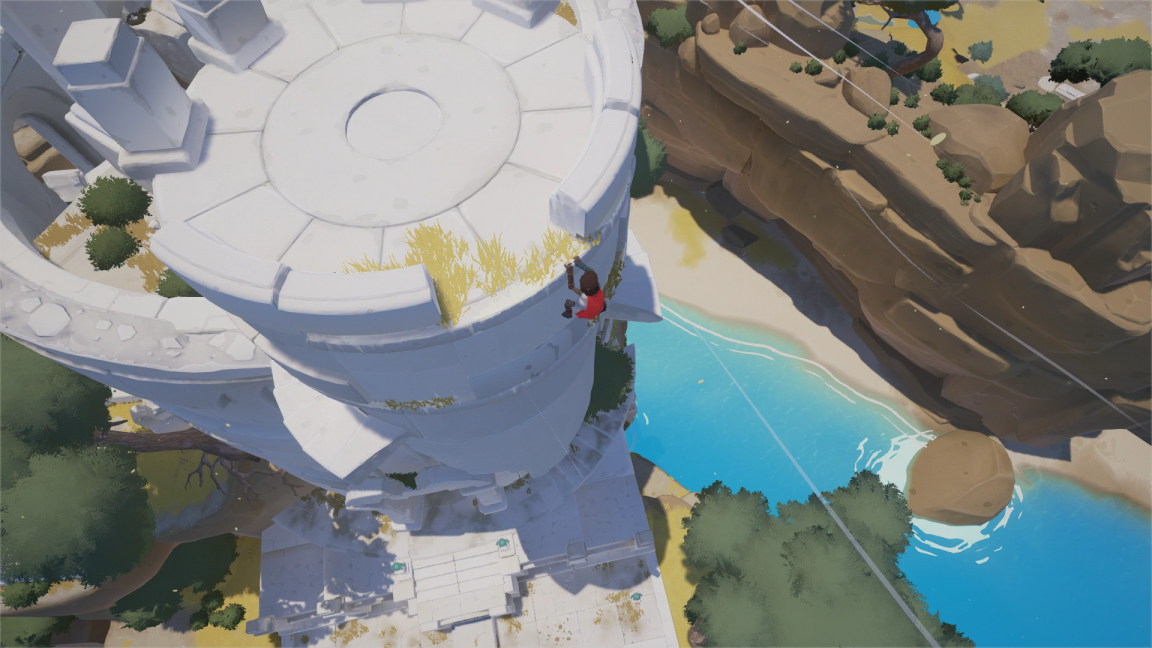 "Rime is beautiful in every sense of the word, and a wonderful experience."

Rime looks and sounds incredible. The melancholy, orchestral soundtrack is gorgeous, but even better is the child themselves, who doesn’t speak but can hum or sing or yell (depending on the context of their situation) with a tap of the triangle button. If an object has a blue or green glow, shouting at it will have some impact on the world – light will fly out and dance around, and something will transform. The world is chunky and rich, filled with pleasant shapes and smooth surfaces, and gorgeous areas laid out in a way that encourages you to mash the screenshot button to capture the vistas you encounter. Playing on a standard PS4, though, there’s some noticeable stuttering in certain areas. The framerate crashes occasionally, and while this was rare enough to not be a major issue it does make me hope that the Switch version will be properly optimised for Nintendo’s less-powerful console.

After pushing forward through the game, always excited to see what the game would do next, Rime gave an ending sequence that - on an emotional level - absolutely kicked my arse. There is almost nothing I can say about it that wouldn’t risk spoiling it, but the game’s final ‘level’ is revealing and powerful. It contextualises all that came before, and brings everything down to a simpler, digestible level. It’s extremely good, and that’s all I want to say about it.

A common phrase people like to use is ‘it’s not the destination, it’s the journey’. There’s some truth in that, of course, but the destination is still part of a good journey. Rime is a game resplendent with beautiful moments, but by the end it’s also something more than those individual scenes, and the destination feels earned. Rime is beautiful in every sense of the word, and a wonderful experience.