Rambo: The Video Game developer Reef Entertainment has sent us a new screenshot from its Stallone-flavoured cavalcade of bandanas, blood and bro-splosions. They also spooled off a list of new gameplay features. 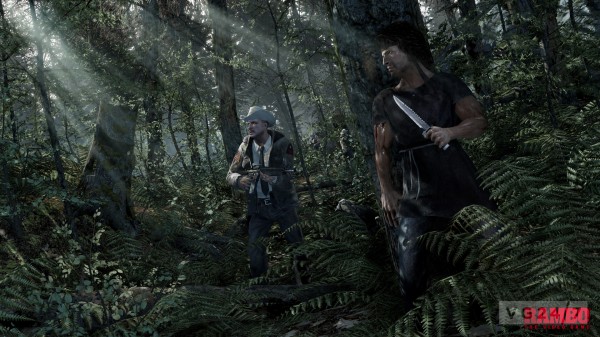 In a release sent to VG247, the studio explained some of the game's new combat features:

Destruction: Unleash heavy weapons such as the M60, explosive-tipped arrows and time-bombs. Cause some wide-spread damage against hard-targets. Take control in iconic scenes from the films such as Rambo’s destruction of the Police Station in First Blood.

QTE-Fight: Authentic fight scenes from the movies are recreated in third-person, quick-time-events sequences.

Stealth-Hunt: Fixed-perspective infiltrations through forests and enemy-camps armed with Rambo’s trademark Bow and Knife. Dodge search-lights and time your bow attacks perfectly to silently eliminate enemies from the shadows. Knife sections will give players the choice of lethal or non-lethal force.

Bosses: Boss showdowns and take-downs from the films - everything from Rambo’s single, explosive bow strike on Lieutenant Tay to shredding Russian helicopters with the DShK 12.7mm Heavy Machine Gun.

What do you think? Does it sound awesome? Can you almost smell the gunpowder discharge wafting through the cracks in your monitor? Let us know below.