Proteus is an art game with a capital Art, so much so that it's reignited the old "what is game" debate. But regardless of its medium, it's a beautiful, evocative experience which you'll either love or be puzzled by.

Proteus: "not a game"

$10 on Mac and PC through Steam or the Humble Bundle Store.

Proteus is a bit like that, I think. You might like it or you might not, but the important thing to remember is that there's nothing wrong with you or Proteus either way. Proteus made me want to go home. It made me forget that I wasn't home. It might bore you silly. I'd regret that, because I like to think you and I share some tastes.

The whole affair is laughably simple. You can look around, and walk, and take screenshots. There's a button for sitting, which does nothing except lower your viewpoint, say, a few feet. As time passes, things change, but your role is merely as an observer. The game begins with a simulacrum of eyelids opening, and to exit, you close your eyes, and keep them shut. It's like stepping in and out of a dream. A lot of people have said it isn't even a game.

"I am a little bored of it, but it's at least been great for visibility," co-creator Ed Key told VG247 of this ongoing fuss, which even inspired a parody Twitter account. "As a marketing friend told me, I couldn't really have hoped for more discussion about it.

"Much of these arguments boil down to personal taste in the end. I didn't expect to be part of this argument at all, since Dear Esther and 30 Flights of Loving have already stretched the definition further than Proteus in some ways."

I could describe my playthoughs of Proteus for you; the first draft of this article did just that. But a blow-by-blow account of the things I saw on my journeys doesn't communicate how well the deliberately simple visuals and rich audio give a sense of place.

I will talk about what I noticed when the sun started to go down as I wandered under a grove of trees, which I called cherries and apricots after the colours of their blossoms, and which stood out blindingly against the cloud-darkened sky. The colours popped in a way I've never seen in a game. Somehow the simple graphics of Proteus captured what even the most skilled photography cannot: the way bright hues contrast against the grey of rainy days.

This is when it really started to get to me. Bear with me a bit longer.

I found a thing which I decided was a frog. I chased it a bit and it made some little noises. I liked the noises so I chased it some more and it vanished into the sea with a final sound, like "plop". I was vaguely disappointed and hoped it would come back, so I could make it go "plop" again. I poked around in case there were any more. There weren't.

The sky grew redder and warmer and a sound of insects rose from the grass. I found a house. The door was boarded up. It sat at the foot of a hill, above a gentle slope leading to the sea. "I could live here," I thought. "There's water. Fruit. Frogs."

Fireflies sparked intermittently. I found some more frogs, and they made different sounds. I chased them back and forth, delighting in the simple pleasure of the music I was making and the funny way they scattered before me. I like to imagine the frogs enjoyed it, too, the way crickets "like" it when you poke them to make them hop.

As the sky continued to darken, a single star appeared - so bright, brighter than you'd ever see in this wretched city or indeed anywhere within reach of a population of more than about 50. It wasn't even properly dark. It was the evening star, I thought. I followed it for a bit. The trees looked different in the dark, cooler, and the insects grew quiet. I saw, and later heard, what I took to be an owl. 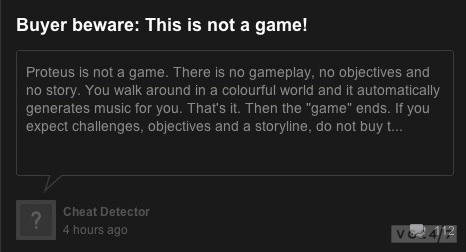 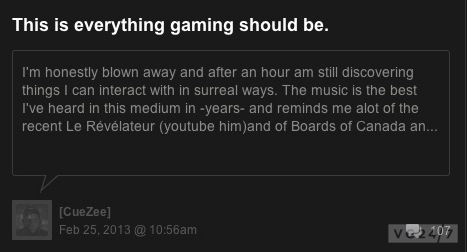 The clouds drew lower and as I meandered up and down mountains in the dark my view oscillated between cloyingly blurred and startlingly clear. On one transition I saw, for the barest moment, the hot streak of a shooting star, and gasped. I stared at the sky for minutes, hoping for more, but was unlucky.

I stared up at the galaxy arm struck across the sky so brightly it seemed the stars were things you could reach out and take. Hand on heart, I stopped, and I took a deep breath, expecting to smell that smell - maybe you know that smell. The sharpness of heat leeching out of the world and into space. The settling of the earth into slumber.

A pang of homesickness struck me like a sharp rap on the breastbone. I was a country kid, a solitary kid, who explored the world and found secret place, places nobody else would ever see or would recognise if they did, and I learned to smell, to listen, to charm small creatures, to sit still and dream of everything and most importantly of nothing. I learned to feel something I could only ever feel in connection with the natural world.

I've never felt that in an artificial world before. Sounds. Colours. Carefully uncomplicated simple things that convey so, so much.

"I always find it hard to say what the 'point' of Proteus is, or indeed anything," Key said.

"I guess the point in creating it was to express something about a certain way of relating to and immersing in the world. I think the emotional aspect is just a side effect of that. People have said some pretty strong stuff about being moved to tears, but of course many other people are left cold."

Most games are about action, and spectacle, and manual dexterity, and those are all good things. Here, I'm expected to say something breathless like "but games can be so much more than that" and you, quite rightfully, would become disgusted with me. Different people appreciate different things, and there's nobody qualified to say a gentle emotive experience like Proteus has more inherent value than an adrenaline-pumping action game. It's just different. Games can be different. And that's a good thing, too.

I got a lot out of Proteus. You might, too. I hope so.

Proteus has been honoured by IndieCade, the IGF Awards, Amaze and Lunarcade. It is available through Steam or the Humble Bundle Store for $10, and is playable on Mac and PC.