One of the greatest RPGs in recent memory is now on PC - and it's an excellent port.

Persona 4 Golden is a very good game. The extended, expanded version of one of the most beloved Japanese role-playing games of the PlayStation 2 era, it trades in a carefree charm that's perfectly matched to the player's activities, whiling away your days in a sleepy Japanese suburb.

For those who came to the series with the also-excellent Persona 5, this is where its predecessor differs most. Where P5 is all about slick style and razor-sharp presentation amid the hustle and bustle of Tokyo, P4G is a softer game across the board. Where it feels like you could cut yourself on P5's deliberate edginess, P4 has sanded down, rounded edges that make it a casual pleasure to handle.

That difference in texture and tone partially comes from a difference in the story being told, but it's also down to the actual design of game. Persona 5 was an uprising, the series staking an aggressive claim to the throne as the king of Japanese RPGs. P4 is the teeing up for that: a perfect expression of Persona before then, a game that knew its niche and its inherent limitations.

Some things, naturally, are a Persona staple and remain unchanged. Catchy music has you quietly humming along and tapping a foot, while relatable, lovable characters riff on each other in fun ways. But perhaps most exciting about Persona 4 is its take on the series trope of the juxtaposition of the mundane plottings of high school life and a fantastical story of world-saving RPG heroes.

Persona 4 is twelve years old next month. The Vita-only enhanced version, upon which the PC port is based, is four years younger. Both versions are games that show their age, but that's only natural. More chunks of Persona 4 pass without voiceover than its successor. The dungeons are randomly-generated mazes of boxy rooms and narrow corridors rather than intricately-designed, specific spaces. The animation is honestly often simplistic - but none of it matters. 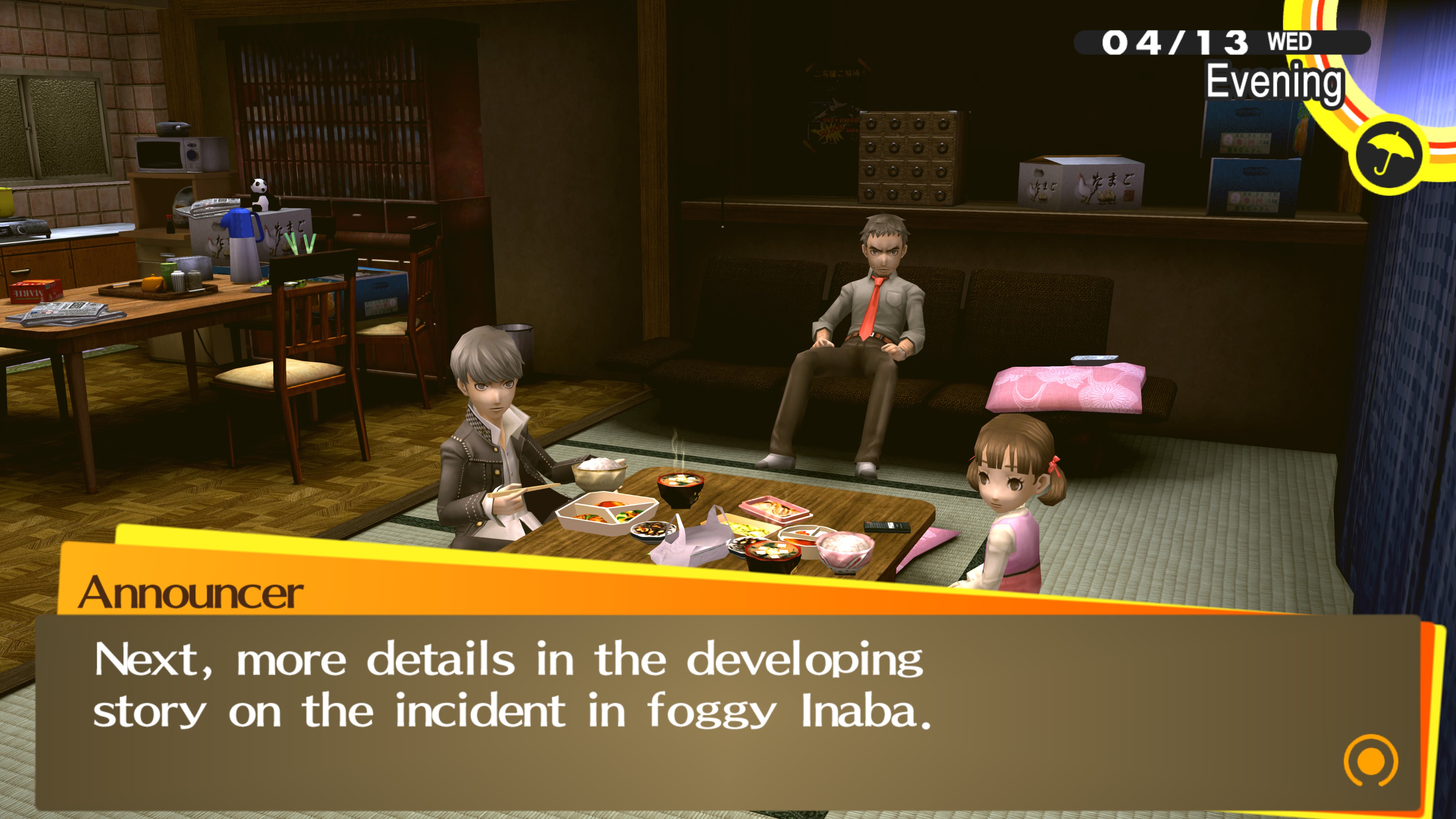 This is where Persona 4 Golden can play on that previously-mentioned charm, using it in parlay to get by on its shortcomings. Even in 2008, Persona 4 was a little dated - Final Fantasy 10 was seven years prior, and even Oblivion had released two years earlier - but none of that mattered. Persona 4 was just special.

This, too, is where the PC port is very successful. It features sharper textures and enhanced details (I was surprised to see that Dojima's car actually says 'Land Rover' on the hood - please don't sue), but none of the beauty and simplicity of the original game has been lost in this. It is successful in the ultimate remaster mission: to appear as you remember it rather than how it actually was.

There are improvements beyond higher-resolution textures, of course. You can crank the resolution up - though I wasn't able to hit 4K, with the build I played topping out at 1440p. That also means a full 16:9 presentation is supported - an important and welcome change from the previous non-handheld version. The frame rate is unlocked, too. The graphics settings are basic beyond this, but this is a decade old game - you shouldn't need 18 different settings for shadows and lighting. 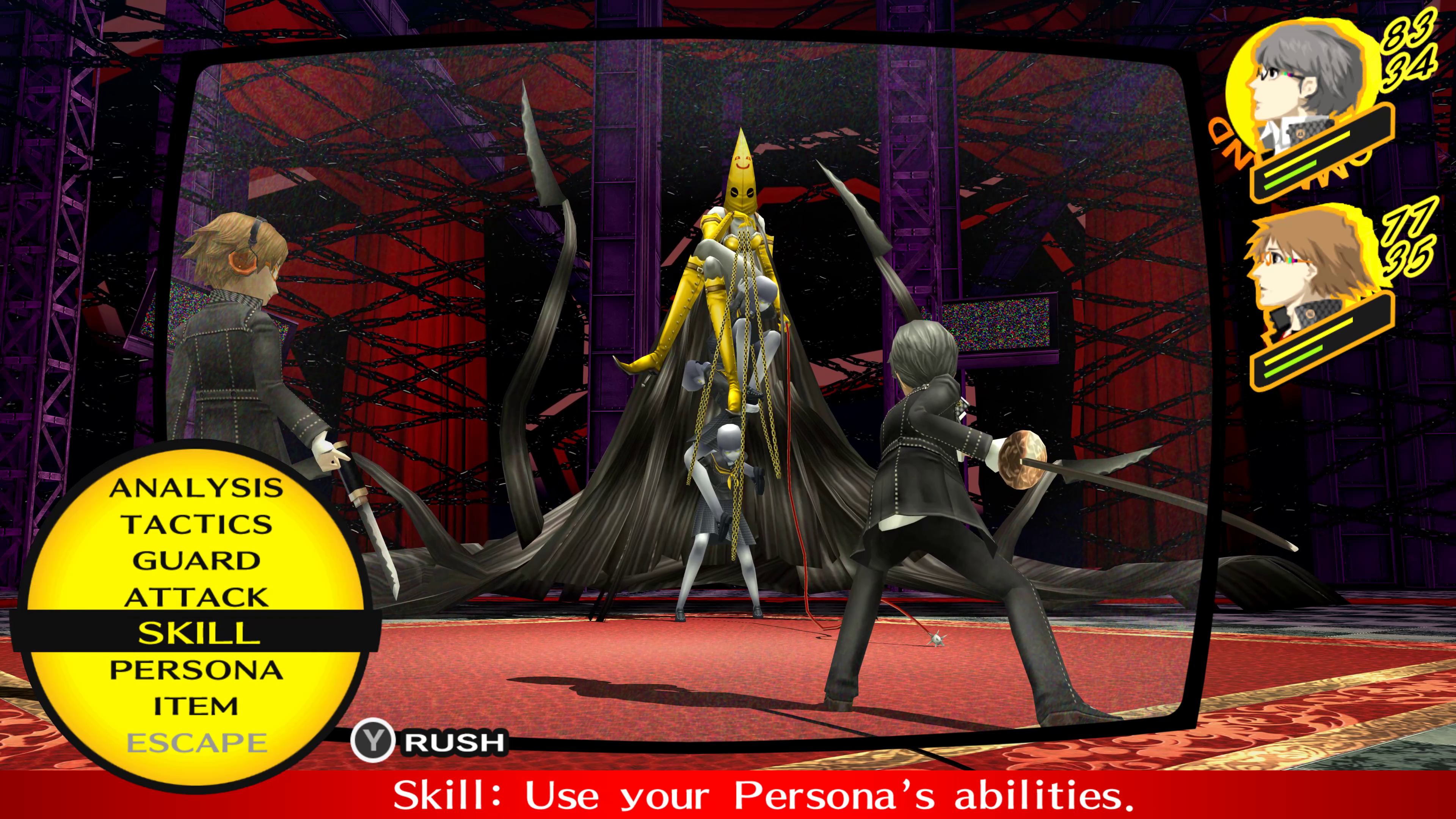 It's a fully-featured package, and a good port. In the two dungeons I've played so far it's run smoothly, and the Scooby Doo style murder mystery gang narrative of the game generally seems to hold up incredibly well by the standards of Japanese RPG coming-of-age stories.

This is one of the best in the genre, and all that charm remains intact over a decade later. What is interesting, perhaps, is that the largest argument about this game's potential shortcomings center around this version. Persona 4 was incredibly well-paced, though it did outstay its welcome a little - and then the Golden additions for the Vita padded it out even further. I've always felt the original P4 is superior to P4G for this reason, but both are classics, and I'll take what I can get - and hey, on PC, perhaps a de-goldenization mod will be forthcoming. Regardless, this is a must-play for Japanese RPG lovers.

The price is right, too $19.99 for the standard edition, and $5 more for a deluxe edition. Perhaps most important, though, is that sets free the Persona series. Yakuza, another Sega series, dipped its toe into the PC market and hasn't looked back - and hopefully the Persona series is now following suit. Persona 3 FES and Persona 5 Royal next? Yes, please.