Call of Duty: Black Ops Cold War returned to the top of the NPD charts in March, and Switch was once again the best-selling console.

The NPD March 2021 report has been released, and it finds total industry spending reaching a March record of $5.6 billion, which is up 18% over March 2020. First-quarter spending totaled $14.9 billion, up 30% year-over-year.

Hardware dollar sales were 47% higher year-over-year (yoy), and set a March record of $680 million, compared to the previous high of $552 million which occurred in March 2008.

Once again, Nintendo Switch was the best-selling hardware in both units and dollars during March. In the first quarter, Switch was the unit sales leader while PlayStation 5 ranked first in hardware dollar sales.

The latter is the fastest-selling console in US history in both unit and dollar sales with five months on the market. 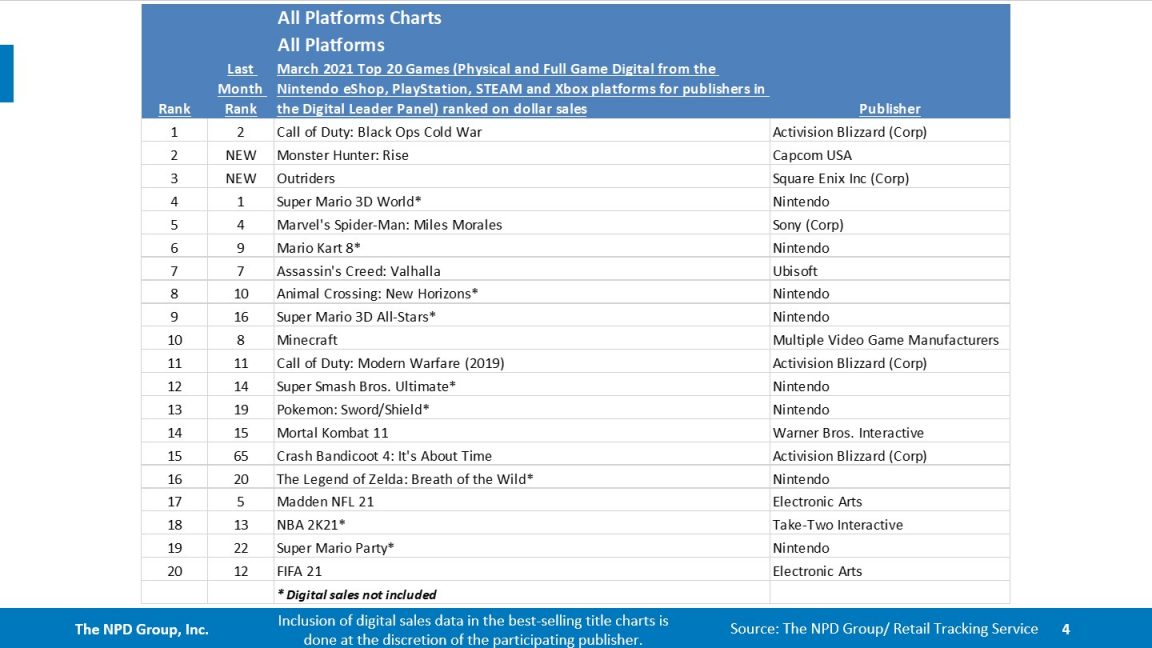 In software, Call of Duty: Black Ops Cold War returned to the top slot in March. The game was also the best-selling title of both the first quarter as well as the 12-month period ending March.

Monster Hunter: Rise debuted as the month's second best-seller, and was also the best-selling game on Switch. Lifetime dollar sales of the game rank as the second-highest of all Monster Hunter franchise releases, trailing only Monster Hunter: World.

Outriders debuted in third place on the Top 20 chart and was the third best-selling game on both PlayStation and Xbox.

The March release of Crash Bandicoot 4: It's About Time on Switch helped the title rise to number 15 on the best-sellers chart after placing 65th in February.

Spending on accessories reached a March record of $300 million, which is up 26% yoy. During the first quarter, accessories sales totaled $717 million, up 42% yoy.

The PS5 DualSense Wireless Controller White was once again the leading accessory in dollar sales for the month as well as the first quarter.