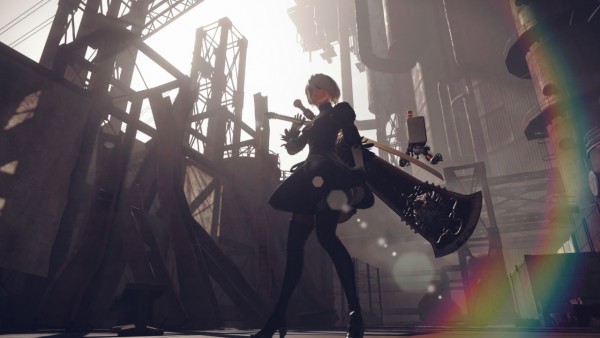 Now that Nier Automata is in the hands of PS4 players -
and soon to be in PC players' hands, eccentric game director Yoko Taro is free to answer fan questions.

Taro attended PAX East over the weekend and took this opportunity to answer a few questions, some of which were captured in this Facebook video. The game director touched on a couple of interesting topics during the Q&A.

For instance, when asked if Nier Automata will ever get any meaty DLC content, Taro said that no DLC of that sort is planned. He added that fans shouldn't anticipate The Witcher 3-style DLC content because Automata has no budget or manpower for that sort of DLC.

The director also confirmed that a photomode is not currently being planned for the game, though given funding, it could be added later.

Elsewhere in the session, Taro said that although many fans have been wanting this, a Drakengard remastered collection is not currently in the works. Like with many of his other answers, he also said that money will make them do anything and asked fans to reach out to Square Enix if they want this to happen.

One amusing question that came up asked Taro why doesn't the game have an autosave feature, despite being called "Automata." His answer was that save stations are a staple of JRPGs that he wanted to keep. This was also the way it's worked with the original Nier.

The rest of the interview is well worth a watch, if for nothing else than to laugh at Taro's frank responses.