Monster Hunter World is finally arriving on PC, and that can only mean one thing: lots of wrangling to get the best possible performance out of the game. We've got some tips for how to hit 60fps at 1440p and 4k...

When we first got our hands on the PC version of Monster Hunter World, we ran it on PC with the default settings. This resulted in the game easily smashing 60fps at 1080p but struggling to get much above the 40fps mark at 4k, things you can see for yourselves in the lovely videos in the links provided.

The thing is, we're also running Monster Hunter World on a pretty beefy PC here. It's running an i7-6700k with 32GB memory and a GTX 1080 Ti GPU - it's a pretty beefy machine. You can read the full PC specs over on the VG247 Gear List, but the point is that now all PC builds will be able to run Monster Hunter World quite so effectively to get 1080p and 60fps right out of the gate. Have no fear, however - we've got some settings suggestions... 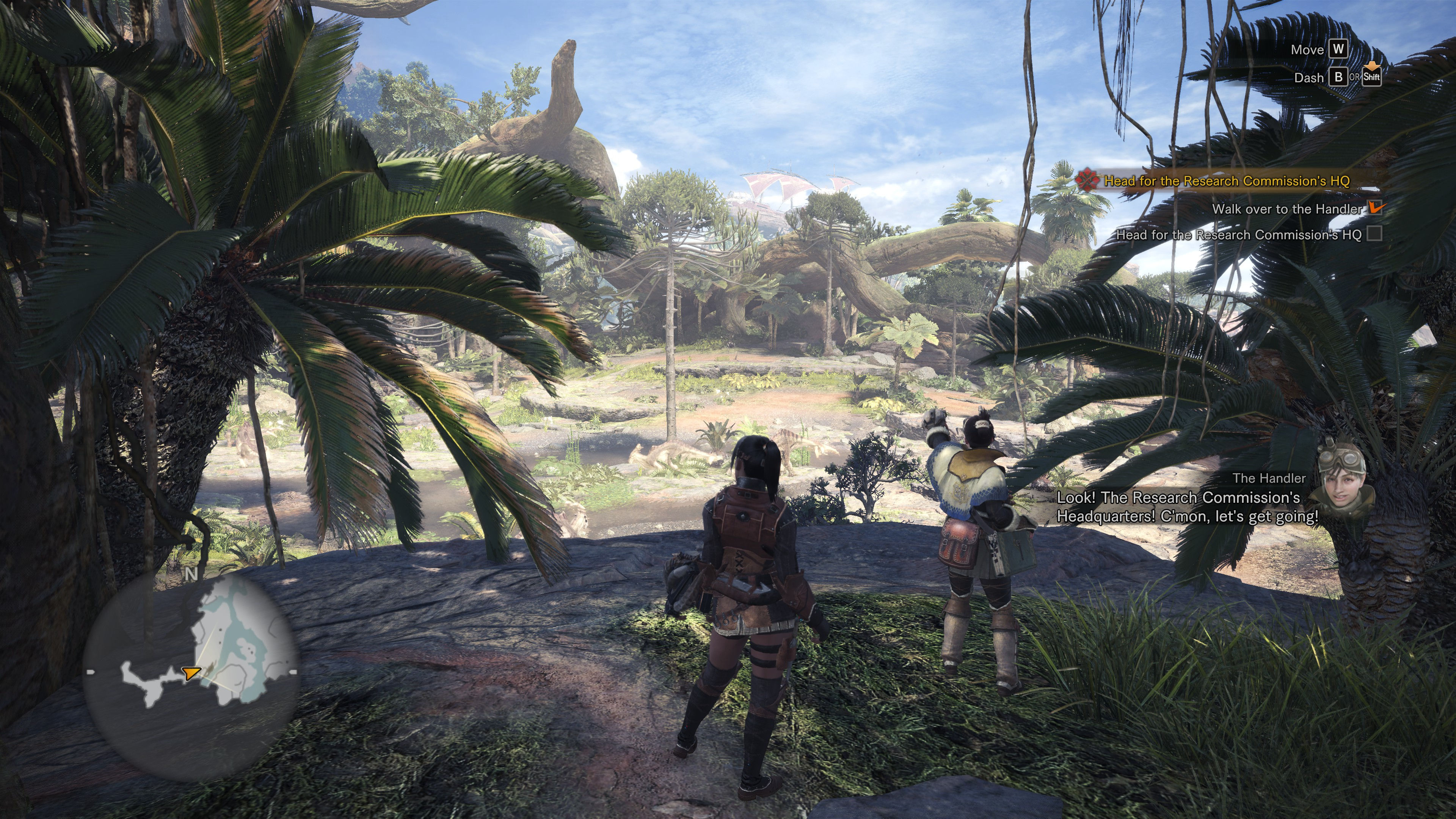 There are a few options you should consider when playing Monster Hunter World on PC for the first time buried away in that graphics section. We have a few settings to recommend in line with that based on the current performance of the game. Let's get into some of the settings we think you should consider changing:

We'd recommend either 4k, 1440p or 1080p. The Monster Hunter World PC settings offer all of these as basic settings in the game, thankfully, so no weird ini tweaks are required. Exactly what you pick is going to depend on your screen resolution, PC strength and your personal preference.

Here's the rub: you're unlikely to get a solid 60fps at 4K unless you're running some sort of insane SLI multiple GPU rig, so if a solid 60 is your priority even if you're running a 1080ti as I am your best option may well be to drop the resolution down to 2560x1440 - a resolution that's well above 1080p but still quite a way behind 4K. It splits the difference nicely, and you'll be more easily be able to hit 60fps. If 30fps is okay with you, 4K should be fine so long as you've a rig to support it. If you're looking for Ultrawide options Arekkz has explored those elsewhere.

One other way to maximize resolution while retaining frame rate is to use the Variable Resolution option, setting it to target frame rate. This obviously isn't for everyone, and if you want a consistent resolution and frame rate both the options we're otherwise describing in this header are better for you.

Everyone else should consider 1080p. The nice thing about MHW on PC is that it is actually a fairly solid port, so it'll hit 60fps at 1080p on relatively modest hardware. This is pretty good, especially considering the PS4 Pro only manages around 40fps at 1080p when in its performance-focused mode. Capcom officially reckons anything above an i7 3770 @ 3.4GHZ, i3 8550 @ 4ghz or Ryzen 5 1500X running an Nvidia GTX 1060 or AMD Radeon RX 570X will manage to run the game at a solid 30fps at 1080p - and you should be able to pass that hitting 1080/60 fairly easily, especially if you take the tips below into account...

So, Volume Rendering Quality is a nifty little setting that's a nice advantage of the PC version of Monster Hunter World - it enables you to toggle the Volumetric Lighting out in the world. The console version of the game has this setting enabled by default, and it basically adds a deeply atmospheric sort of sheen to the world via some heavy lighting tech. If you're having frame rate related woes, dropping this setting down can seriously assist in turning things around - though it has to be noted that this comes at significant cost in terms of one element of the game's visual look.

The differences here are pronounced to different levels at different times of day, but here's what it looks like both with and without the setting enabled at 4K in one screenshot, split down the middle: 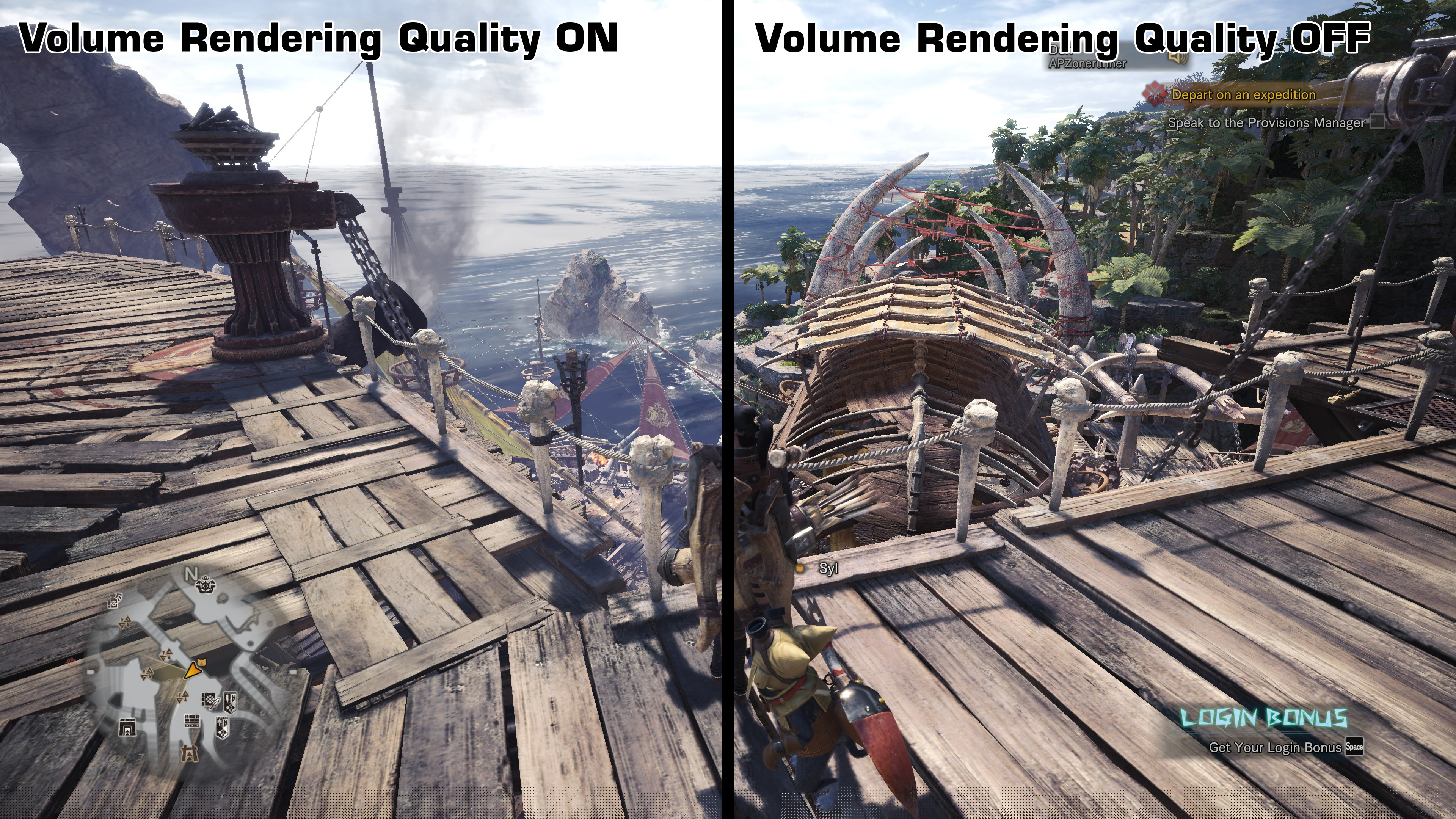 This setting actually has a number of settings: Off, Low, Medium, High, Highest and Variable. So you've got options. Turning it off gained me as much as 10-15fps when struggling to hit 60fps at 4K, however, so it really does make quite a difference. You may also decide you prefer the look of MHW with this setting off anyway: you lose some of that atmospheric, hazy look but the whole game is quite a bit sharper as a result. I actually think it looks better with this option off, so the frame rate gain is a nice bonus on top of that.

An unlocked frame rate can lead to an uneven experiecne where the frame rate lurches about all over the place. Unlocked that can lead to glorious 70 or 80fps runs on a 1080p PC with a high spec, but the flip side of that is a 4K frame rate that jumps between the low 40s and the high 50s, which can be very distracting. The easy answer to that is to Limit the frame rate to 30, which means it'll never climb above that. The same is true for if you can hit 70-100fps - locking to 60 will result in an overall lower frame rate, but it'll be silky smooth.

There's no option to lock the frame rate in MHW on PC, so limiting is the closest you'll get - but it's well worth it.

One final piece of advice from us for now on Monster Hunter World is that's a CPU-intensive game. If you're running a high end, hugely powerful graphics card but are experiencing problems even getting to 60fps at 1080p - or even are experiencing crashes - chances are it's down to your PC's CPU. Patches and tweaks have been arriving in the pre-release period when we've been testing out the PC version of the game, and though it's ran well for us from day one we know some others have experienced problems that Capcom is working to remedy.

Ultimately the problem is given a clue in the name of the game, however: Monster Hunter World is all about that large-scale world, and so the game is keeping track of a huge environment and lots of different monsters that can interact all at once in the background. This means it can be pretty taxing for CPUs.