Microsoft's community figure Major Nelson has stated that the company will not block your library of Xbox One games should your Xbox Live account become banned. The statement was given at E3 last week and comes as confusion clouds the matter.

Nelson's statement comes after this tweet sparked outrage among gamers, as it seemed to suggest that Microsoft would block a user's Xbox One games if they suffered an Xbox Live ban: 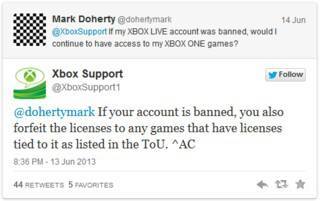 The tweet has since been confirmed as an error, and in reference to Xbox 360 only via this tweet:

@amigocesar We have no info on the Xbox One ban situation. The Tweet that is being referenced was a mistake, it was about Xbox 360. ^CW

Now, Major Nelson has appeared in a Reddit video interview conducted by the site, in which he answers questions about the console from the community.

You can hit this link to skip to the question regarding Microsoft's rumoured block on Xbox One games following an Xbox Live ban.

In response to the question, Nelson said, "Absolutely not, you will always have access to the games you purchase. Absolutely not." He then suggested that you would only be banned from multiplayer.

It's a concrete answer, but what do you make of the above? Let us know below.