Last night's Microsoft Showcase turned it up to eleven. We have a full report from Justin Kranzl.

Gears of War 3
The big kahunas. It was hard to miss Microsoft’s monster franchises at their Xbox Showcase event in San Francisco. The first thing people saw as they entered the venue were two rows of five Xbox 360s running a build of Gears of War 3. Next to them - more banks of consoles, this time running the new Halo: Reach Defiant map packs. Double the trouble? For first person shooter fans - sure.

However Gears 3 was clearly intended to be the big first party gun at the event. The build, likely to form the basis of the soon-to-be-released multiplayer beta of the game, offered team deathmatch with a little twist. In addition to the standard scoring regime - points for kills, assists and the like - players had a strong incentive to not hurl themselves carelessly into battle. A shared pool of "lives" amongst your team meant teams featuring the kamikaze-inclined were at a distinct disadvantage to more cautious types.

One side product of the mechanic is more players were actively trying to revive fallen comrades. This in turn lead to cunning players resisting the temptation to finish off fallen foes in favor of trying to lure more victims into the killing field. It lead to a clash of two standard gamer behaviours: the hero urge, where players dash in under heavy fire to rescue a downed teammate, and the desire to score as highly as possible. Players who resisted the urge to pick off a crawling enemy for a few points generally helped their team more in the games we played.

If one word could sum up the experience, it would probably be “balanced”. Gears masters “the formula” - the tricky equation of just long you should have to pump bullets into an enemy before they drop. Not that a standard stream of automatic fire was the only option on offer. Players who were deft at sneaking up on others made good use of the sawed-off shotgun, which at close quarters will kill a player in one shot. The lengthy reload time was a fitting punishment for those who got it wrong.

Also the option of using a “retro lancer” meant players could plunge a bayonet - as opposed to the standard lancer chainsaw - into people foolish enough to venture into melee range. Melee is generally an unpleasant range to be in for the less-proficient Gears 3 player. In addition to the risk of being chainsawed, bayonetted, or one shotted by a sawn-off shotgun, players also have to heed the melee attacks in game. Land a couple of these and your foe will hit the deck, ready for a curb-stomping finisher that will have vegans cringing. This too is an example of sound balancing - the time between melee attacks means the onus is to strike first and accurately. Don’t expect too much in the way of flail-spam melee encounters here - it’s a more precise, deadly affair.

The maps too extended the balance theme. Even on the relatively spacious confines of the Thrashball map, players trying to set up camp and snipe with impunity found there were too many entry points for a savvy foe to track them down and brutalise them. Some maps - like the nigh claustrophobic Trenches (our fave) managed to walk a very fine line between offering short-to-medium range shootouts and ample opportunity for melee engagements. We didn’t play any map where conflict devolved to players settling for plinking at each other from long range.

Gears of War 3’s public beta is expected to go live “mid April” - plenty of time for the Epic team to decide what four maps will be included. Voting is currently taking place on the Gears Facebook page.

Crysis 2 was our early candidate for “game most likely to steal the show from Microsoft” for a couple of reasons. One, EA had the stones to demo the game in 3D only. If you weren’t wearing the glasses - and sitting at eye level - you were missing out.

Crysis 2 executive producer Nathan Camarillo made two pretty surprising assertions. First, the game’s detail level and framerate are unaffected by 3D mode. Camarillo stated there was no performance hit - a claim reminiscent of Mark Lamia’s one applied to Call of Duty: Black Ops’ 3D mode. Camarillo said the 3D mode wasn’t just tacked on, but had been something the team had been working on for the past couple of years.- when 3DTV was really in its commercial infancy.

The second revelation (at least to me) was how Crytek are addressing the “problem” of a dimmer games experience - something people may have noted in relation to Killzone 3 and Call of Duty: Black Ops’ 3D modes. The solution is nothing grand - it’s a simple crank of the gamma up a couple of notches. Camarillo likened it to adjusting the f-stop setting on a camera - only in this case you’re not letting more light in, the game is putting more light out.

It’s a simple enough answer. Hands on, the game is super sharp. The visual acuity on a 3D TV - the screen being used was a LG - is something else. However strolling about underneath the towers of a stricken New York by its very nature is a gloomier affair than gambolling out on the sunlit plain - we’ll wait to check out some sun-drenched climes before we know if a simple gamma fix is all that’s needed.

Control in Crysis 2 - albeit on the console version, the only one available - is precise and sharp. There’s room for some flair in your play as well, players can make use of a feet-first skidding stop, complete with simultaneous gunplay for the dextrous. The game’s nanosuit also presents a sound layer of control complexity for punters seeking more from their FPS than the next wave of AI drones marching to the slaughter. 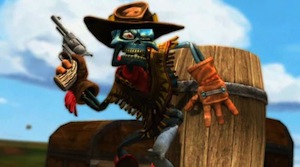 The best of the rest?
While Gears of War 3, Halo:Reach and a hands-off Batman: Arkham City demonstration dominated real estate upstairs (and Crysis 2 commanding eyeballs downstairs), it was fair to say the Xbox showcase was more than a two (or four) horse show.

Fable III on PC put in a strong showing ahead of its March 20 (EU) release. Xbox 360 players have the Traitor’s Keep expansion to look forward to on March 1st to boot. Twisted Pixel’s new IP The Gunstringer also showed a pretty handy way to use Kinect - literally. Players use one hand to control the marionette cowboy protagonist, and the other to aim and shoot. We saw a functioning cover system at play, as well as a third person mode racing/shooting mode as well. For a XBLA title the production values are high, reflecting the level of competition out there.

Speaking of which, XBLA also scored a 3DTV compatible title in the sequel to Dead Samurai, The Dishwasher: Vampire Smile. The side scroller showcases a 2D sprite-style but the addition of 3D support no doubt will make it an anticipated pick up for early adopters.

But of all the Xbox Live Arcade titles giving their full priced brethren a run for their money, it was Runic Games’ Torchlight port to Xbox 360 which stood the best chance of stealing the show. Like many games at the showcase, Torchlight was only on show on one unit, but the game looks to have made an exceptional transfer over to the console platform from PC, where it garnered no shortage of praise in 2010.

Runic CEO Max Schaefer - who worked on the original Diablo - agreed that the console version of the game not only borrowed from Blizzard’s hallowed dungeon crawler, but in execution owes some inspiration to the likes of Baldur’s Gate: Dark Alliance. Schafer said the success of BGDA on console proved the interface could work on console, and that elements of Torchlight were inspired by the top down, isometric title.

In practice, Torchlight just works. It’s the essence of pick up and play, which is ideal for the XBLA crowd. PC fans of the game can attest Shaefer and Runic have a real gateway drug of a franchise on their hands - plenty more players will be getting familiar with RPG conventions like gearing, talent trees and more. Priced at 1200 MS points - around the cost of a month’s subscription to a MMO - it should move at a tidy clip.

Child of Eden in action.

Probably the biggest fish out of water - flanked as it was by Halo: Reach and Gears of War 3 was Q Entertainment’s Child of Eden. The quirkily psychedelic music shooter’s Kinect version was available to play to punters who may have found the lustre of Halo’s armour fading or Gears’ bloodshed blending into the background. With Rez a decade old the time seems ripe, and Child of Eden doesn’t disappoint. Aside from subjective appraisals of the game’s abstract presentation the only real criticism we could make of the game was its on-rails nature. Players control the action via aiming a reticle (you couldn’t something this flamboyant a “crosshair”) with their hands, with special moves being unleashed by raising or clapping both hands. Then again, if any game gets a pass for taking you on a ride (on rails) it’s this one.

It won’t be every gamers’ cup of tea, but as project manager Lindsay Gray observed, for players looking for a different - yet still skill intensive - take on a shooter, it’s bound to leave a mark.