The combat exists! We've tested it, and it's brilliant.

I've already written about Resident Evil 7: Biohazard a couple of times here on VG247. Both times were enjoyable forays into a spooky, atmosphere-soaked experience, but in both instances I was left with a major question: how will the actual game play?

Both of my previous experiences were free of combat and ultimately rather light on the puzzle solving. My long period of wondering is finally over, however: Yesterday, I played a good four hours of Resident Evil 7. I shot things. I solved puzzles. I found obscure-looking keys to open overly-complex doors. It's some mega Resident Evil stuff, and it's brilliant.

"More or less everything about the tone is very 'classic' Resident Evil, calling back to the classic original titles on the PS1 more than any game since."

The section I got to play was a slice taken from around an hour into the game. As a result I was missing some significant story context of how protagonist Ethan found himself in the house of horrors - but none of that really matters too much anyway. This could just as easily be the opening of the game.

You find yourself trapped and in the company of a psychopathic family, as depicted in a few of the trailers. They're clearly going to eventually kill you or worse, and so it's up to Ethan to extract himself from the situation before it's too late. There's a wrinkle, of course: the maze-like house is set up with complex door locking mechanisms and your girlfriend (or wife? More missing context for me) is also trapped in another area of what appears to be an entire twisted estate.

Mysterious phone calls to otherwise disconnected phone lines offer up instruction and assistance from a mysterious stranger. Notes around the house suggest that you're far from the first victim. More or less everything about the tone is very 'classic' Resident Evil, calling back to the classic original titles on the PS1 more than any game since. 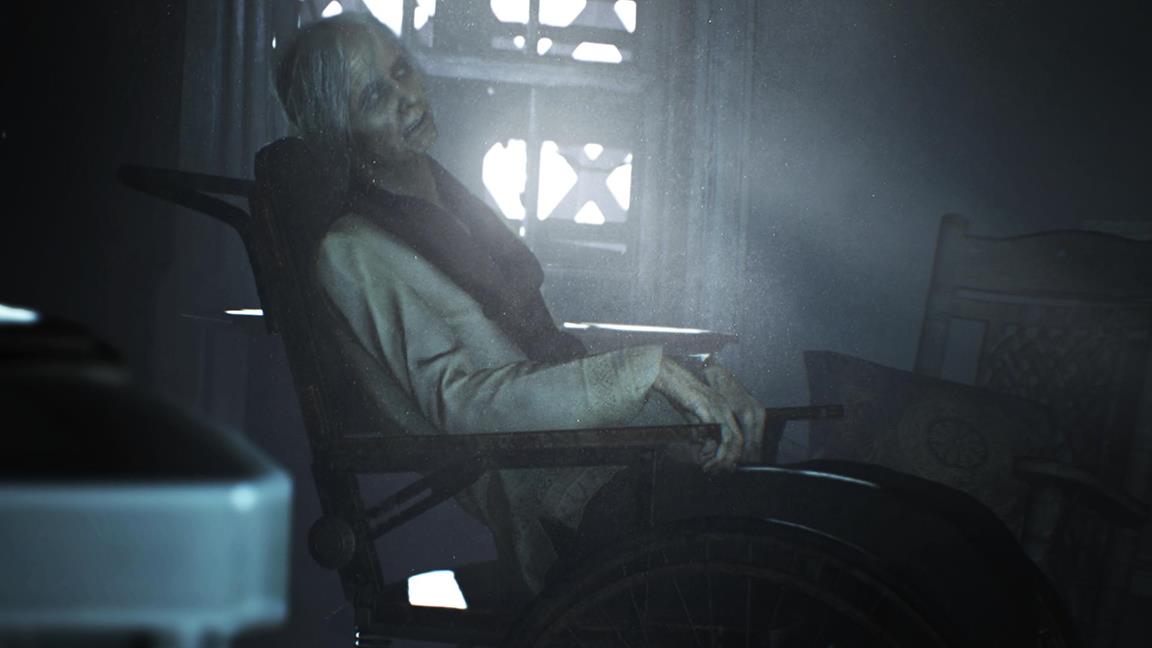 Resident Evil 7's inspirations are obvious: the first person perspective and the deep sense of foreboding the game does a pretty fine job of instilling in the player can be traced back to the likes of Amnesia and of course PT, but when you push past that what lies beyond is pure Resident Evil, and that's the greatest joy of it especially for someone like me with fond memories of the corridors of Spencer Mansion.

Capcom has asked us not to spoil many things about our extended time with the game, but there are hints we can give while keeping it vague. At one point I'm traipsing from one side of this house to the other in search of mini metal dog heads that form part of a crest on a door. Without them the door won't open. In another instance I do some entirely optional backtracking through hidden passageways to complete a series of steps to get my hands on a shotgun.

All the while as I criss-cross the house one member of the family stalks its halls. As I approach one wing I hear his thudding footsteps and taunting yells. These encounters are tense; as far as I can tell there's no way to kill here, just incapacitate.

You're encouraged to hide in the shadows or to try to outrun these enemies until they lose sight of you. This makes for some great moments, especially early on when you lack a weapon. As you do all this the house teems with atmosphere. There's excellent sound work and a creepy comatose grandma who never seems to move in front of you but keeps changing position when you're not looking. Some of the jump scares are a little cheap, it's true, but it's all still good. 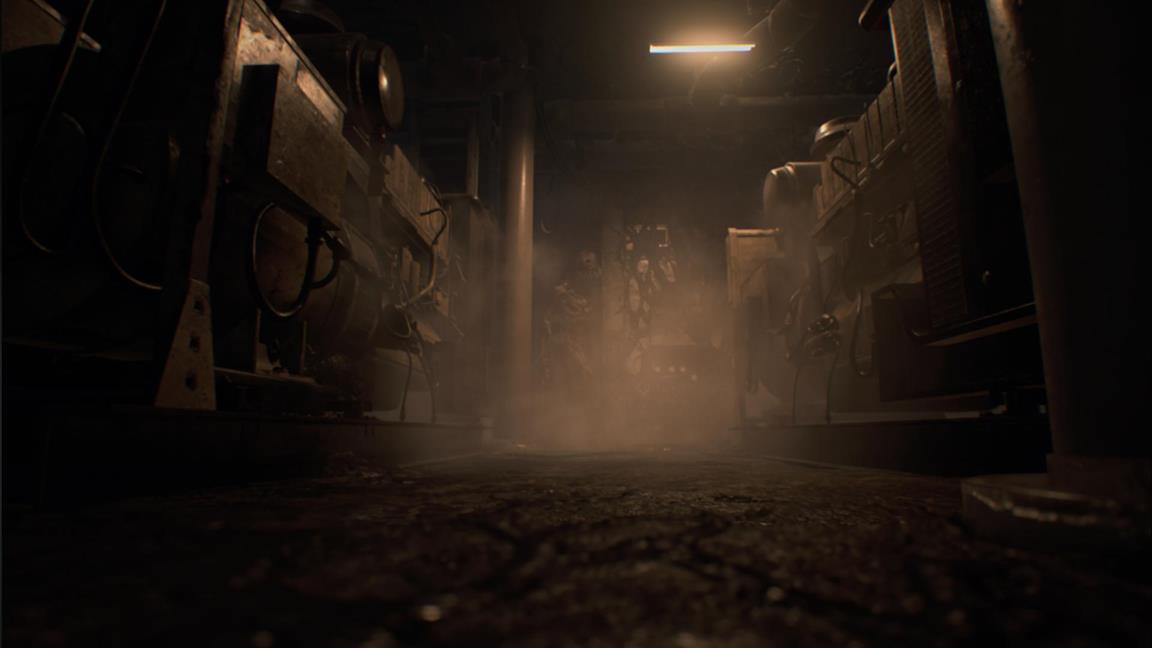 The core of the combat in the slice of Resi 7 that I got to play also feels similar to the classic games. The game is essentially split into pieces: there's stealth, exploration and combat.

"Combat exists to break up the puzzling and exploration and set your nerves on edge - but crucially it is a means, not an end."

Stealth here is used to avoid members of the family, exploration to puzzle your way through the design of the house and combat to take down the Molded - twisted creatures that are more like some of modern Resident Evil's more twisted takes on the infected than traditional groaning and shuffling zombies.

While you have traditional first person shooter control, something of the panic tank controls forced upon the player has been retained here. Ethan is not Leon or Chris - he's not some super-soldier. He's no firearms expert, and so there's a sort of looseness to aiming that left me feeling a little uncomfortable with combat - but in a way that in this context is a good kind of uncomfortable.

As Molded threateningly bear down on me I tended to turn and run in order to turn back, plant my feet and aim carefully. Ammo is limited so every shot counts, with headshots turning what could be an eight-bullet battle into a three-shot execution. That in itself could be a life-and-death difference in your next encounter. 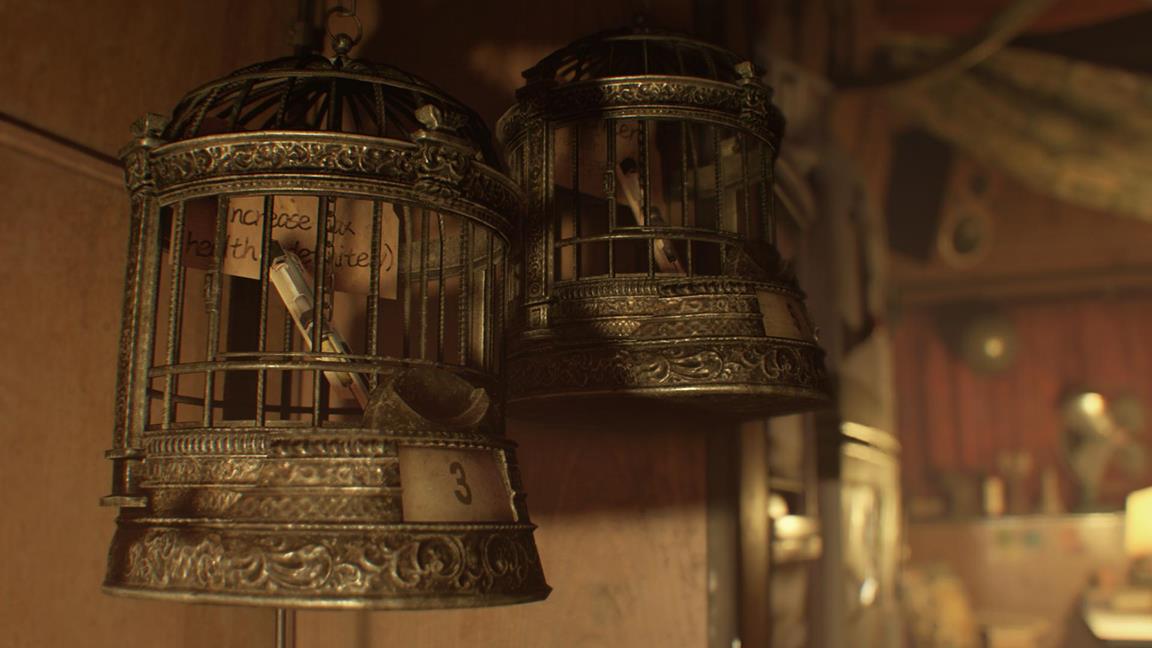 For a while Resident Evil went on an action-driven tangent and became an action series. It's pretty clear to me that this isn't what Resi 7 is - the second house on the estate (and the last I visit in this preview) doesn't feature the Molded at all, but instead swarming bug-type enemies who are tackled a different way. In both houses combat exists to break up the puzzling and exploration and set your nerves on edge - but crucially it is a means, not an end.

Oh, and there are boss encounters. I can't really talk about them, but one thing I liked is that these too feel like more traditional, old-school bosses. Wars of attrition with foes that are threatening in gameplay and creepy narratively.

Questions still perist remain, of course. Resident Evil 7's gameplay loop as presented here is pretty great stuff, but I do wonder how it'll hold up over the course of 15 hours or so. There's also that big story question: just how, if at all, does this game connect to the previous games? I have theories, but I'm ridiculously excited to play the final game and get some answers.

It's pretty safe to say I loved my first four hours with the proper, fully-featured Resident Evil 7, anyway. It's exciting and different while at the same time absolutely reverential to the mechanics that made the series great in the first place. I can't wait to play more.