The first few hours of Sony Santa Monica’s latest God of War game had me worried. I love the originals, and played through the trilogy in the fortnight leading up to the release of this new installment to make sure I wasn’t viewing these games through rose-tinted glasses. Certainly, in the case of the sequels, I wasn’t. They’re still wonderful, the combat controls still provide thrilling, responsive action, and the spectacle - the boss fights, the incredible set pieces, and stunning vistas - all hold up against modern games.

I was worried because Kratos himself - a less lean, more burly, bearded viking to fit the new Nordic setting - seemed to be the only thing tying the games together. It reeked of typical Sony triple-A game - a post-The Last of Us corridor littered with cinematic sequences. A very pretty corridor, sure, but perhaps without a personality of its own.

Fast forward twenty-odd hours, and I’m sat here thinking this new God of War might actually be a masterpiece - an exceptional entry in the series and a standout game of the generation. It is also a game that reframes the entire series. 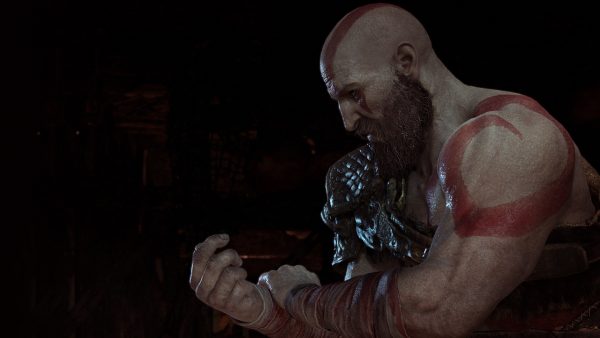 It’s no secret that the original trilogy is peppered with problematic moments. Big Krates shagged and murdered his way through Greece for little more than the titillation of the sixteen year old playing the thing. Thematically, however, there was more to Kratos than QTE violence and pressing X to bone. The character was designed as a cipher for pure, blind rage. Anger, made flesh. Every aspect of him, from his weapons to his angular, pointed look and even the way combat works is designed to make you feel like an out-of-control force of nature, driven by a single-minded goal. The Blades of Chaos - fiery swords attached to chains burned into Kratos’s skin - were indiscriminate: a blazing whirlwind of death.

No matter the cost, Kratos wanted revenge. And cost it did, in more ways than just the character’s story arc - the violence and semi-pornographic QTEs led to the God of War games getting a bad reputation for being products ‘of their time’, tarnishing their legacy as the solid action games they were. A soft reboot was needed.

When most games attempt a series reboot like the new God of War, they pay a little lip service to the original games to keep the nerds happy and then move on. The developers are well aware that a good percentage of people (due to the constantly expanding nature of the video game industry) are experiencing their series for the first time and couldn’t give a shit about what exactly Kratos got up to in Rhodes back in 2007. 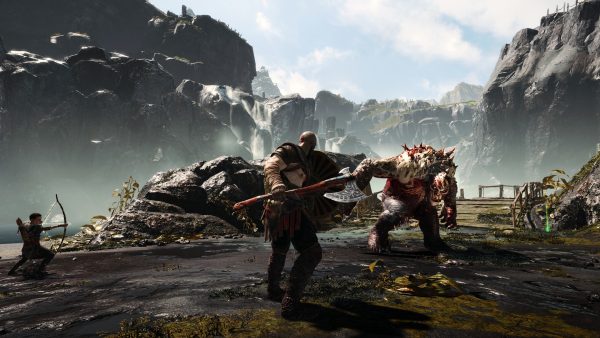 I wouldn’t blame Sony Santa Monica if it wanted to move past some of the violence and misogyny, given the current climate, but instead Cory Barlog and his team had other ideas. They embraced Kratos’s history - a history they wrote - and used it as a base to move the character, and series, forward.

Kratos finds himself having to take responsibility for his actions here. Not only for his past, which he hides from his son, Atreus, but also for Atreus himself - his future. He’s aware of the cost of his violence, knows he’ll never truly be free from it, but doesn’t want his son to inherit his legacy. He knows he needs to get his shit together, basically, and he’s been avoiding confronting the truth by constantly fucking off out on hunting trips, until the death of his wife forces action.

Unfortunately, getting his shit together could mean a scrap with the Norse pantheon, so you can see why he’s not exactly forthcoming. He’s seen what can happen, even when he wins. This manifests itself in Kratos’s personality with him being stoic and standoffish with his son, telling him regularly to keep his emotions in check, even though they are both grieving. A notable point is when he tells Atreus, after taking his first life, to “close his heart off to it”. 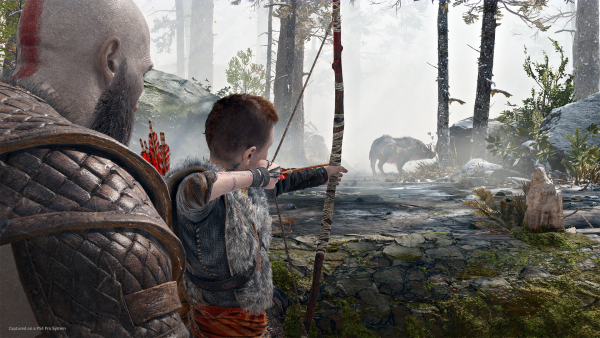 This isn’t just indicated through the narrative, however. Anyone can watch a cutscene and be spoon-fed what to feel. God of War uses similar mechanical tricks to the Blades of Chaos and the way they emphasised Kratos’s rage to bring you closer to the situation. Hell (Hel?), is it a coincidence that instead of those fiery blades, the baldy butcher now uses an ice axe - or is it a symbol of him cooling off in the years after punching his dad to death?

Atreus is equipped with a bow and arrow that you can fire off during combat, damaging and stunning enemies, allowing you to squeeze in some attacks of your own or even interrupt them from a big, telegraphed attack. Your nimble son will automatically fire from time to time and eventually even rush enemies and dive on them, doing damage and taking them out of the fray temporarily - all skills you can upgrade through the more detailed RPG-esque system this new God of War has.

Encounter difficulty soon ramps up and you need to increase the power and abilities of father and son to face them. It all comes together perfectly, to the point where you find yourself relying on Atreus. He becomes a key part of every encounter, and the first time you hit square to have him fire an arrow that saves your otherwise-absolutely-dead arse from an boss enemy, you feel more attached to him there than during any cutscene. He is useless at the start, hiding during the very first scrap, but he becomes the reason you didn’t have to restart that difficult encounter. 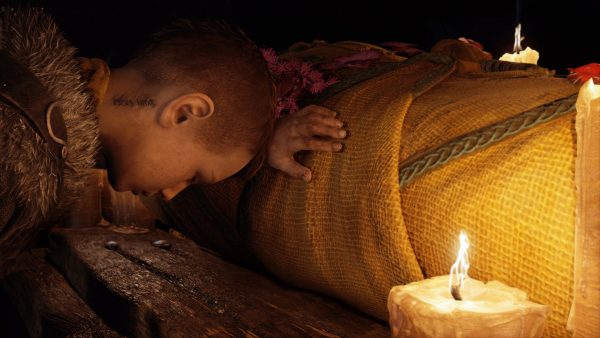 Kratos doesn’t talk about his emotions much (another toxic masculinity touchpoint the game uses and builds upon), and he wishes to keep his history secret from Atreus, but through combat and adventure he becomes closer with his boy. Boy! And so do you. His ability to read runes and open some shortcuts are one thing, but he is integral to your moveset, an extension of Kratos himself.

It’s something I’ve always appreciated in games. It’s fine in something like Firewatch or Gone Home - games that are solely narrative - but I find myself becoming far more involved in what a game is trying to say when the developers weave the mechanics into the message, rather than some one-note cutscene telling me how I should feel.

Games such as Papers, Please, Far Cry 2 and - believe it or not - Donkey Kong’s Jungle Beat all use their mechanics to lift up the story and themes, from the monotony of work to what it’d be like to cave someone’s head in as an ape. I’ll take that over the on-rails, albeit emotional intro to The Last of Us.

I won’t lie, I didn’t think Sony Santa Monica would be able to square away Kratos’s history. I thought the writers would bottle it, hoping that people would conveniently forget. Instead, they’ve embraced it - warts and all - to create a believable character with real flaws.