It’s intentional: the way he walks away from the camera, toward a monstrous wall of flames as the ominous music crescendos, mirroring one of the most iconic scenes in games. But where Final Fantasy 7’s Sephiroth marched, Final Fantasy 14’s Emet-Selch almost drags his feet. His back is hunched, as it usually is; as if there is an invisible force weighing him down.

Where Sephiroth was menacing because of the ease with which he flaunted his power, Emet-Selch is terrifying in how clearly his power is restrained at all times - how, over several eons, he has mastered the art of patience. He’s also the hero of his own story. While Sephiroth wants to destroy the world, Emet-Selch wants to rescue it. 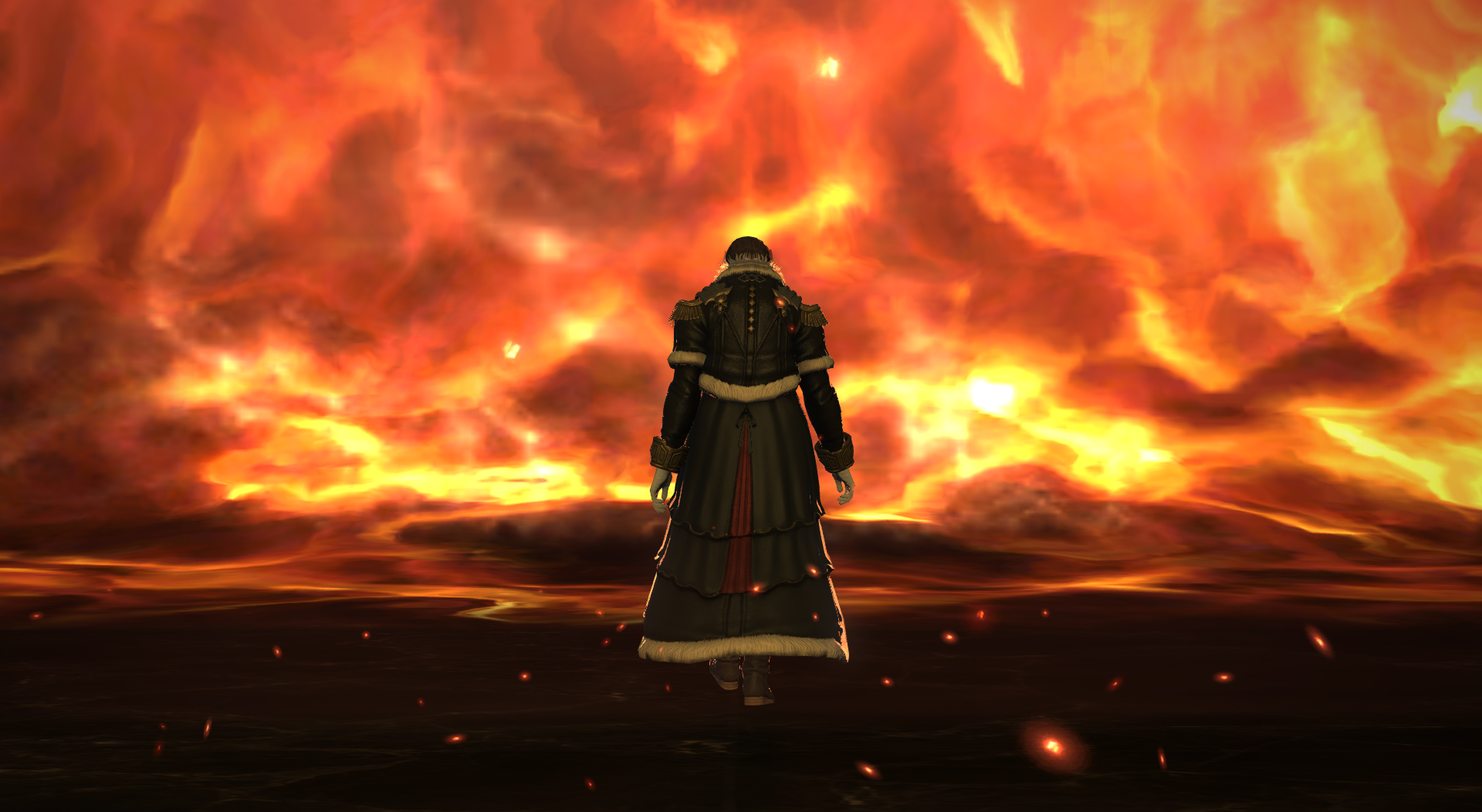 In the year when we’re getting perhaps one of the most anticipated video games of all time, the Final Fantasy 7 Remake, something curious has happened. NHK, Japan's national broadcasting organisation, has conducted a fan poll for various Final Fantasy categories. While the poll’s full results are still being unveiled, it’s been revealed that Emet-Selch now sits above Sephiroth in the Best Character poll, dethroning one of the most famous villains in gaming history in the process.

For those who will understandably refuse to play through 200 hours to reach Final Fantasy 14’s Shadowbringers expansion, in which Emet-Selch is a central character, this may come as a surprise. But to those who know him, it might be an understatement to just say he’s an incredible villain. To many, he’s not only the best Final Fantasy villain, but also one of the best-written characters to ever exist in video game storytelling.

As popular as the MMORPG is, Final Fantasy 14 is still seen by some as less valid than its single-player counterparts. But ask any fan of the game and they’ll be eager to tell you that the writing’s quality easily matches, and even often surpasses, that of the most well known entries in the series. Emet-Selch is only the latest testament to this, but he’s a major reason as to why Shadowbringers sits between Red Dead Redemption 2 and Disco Elysium at the top of Metacritic’s list of the highest-rated PC games of 2019. 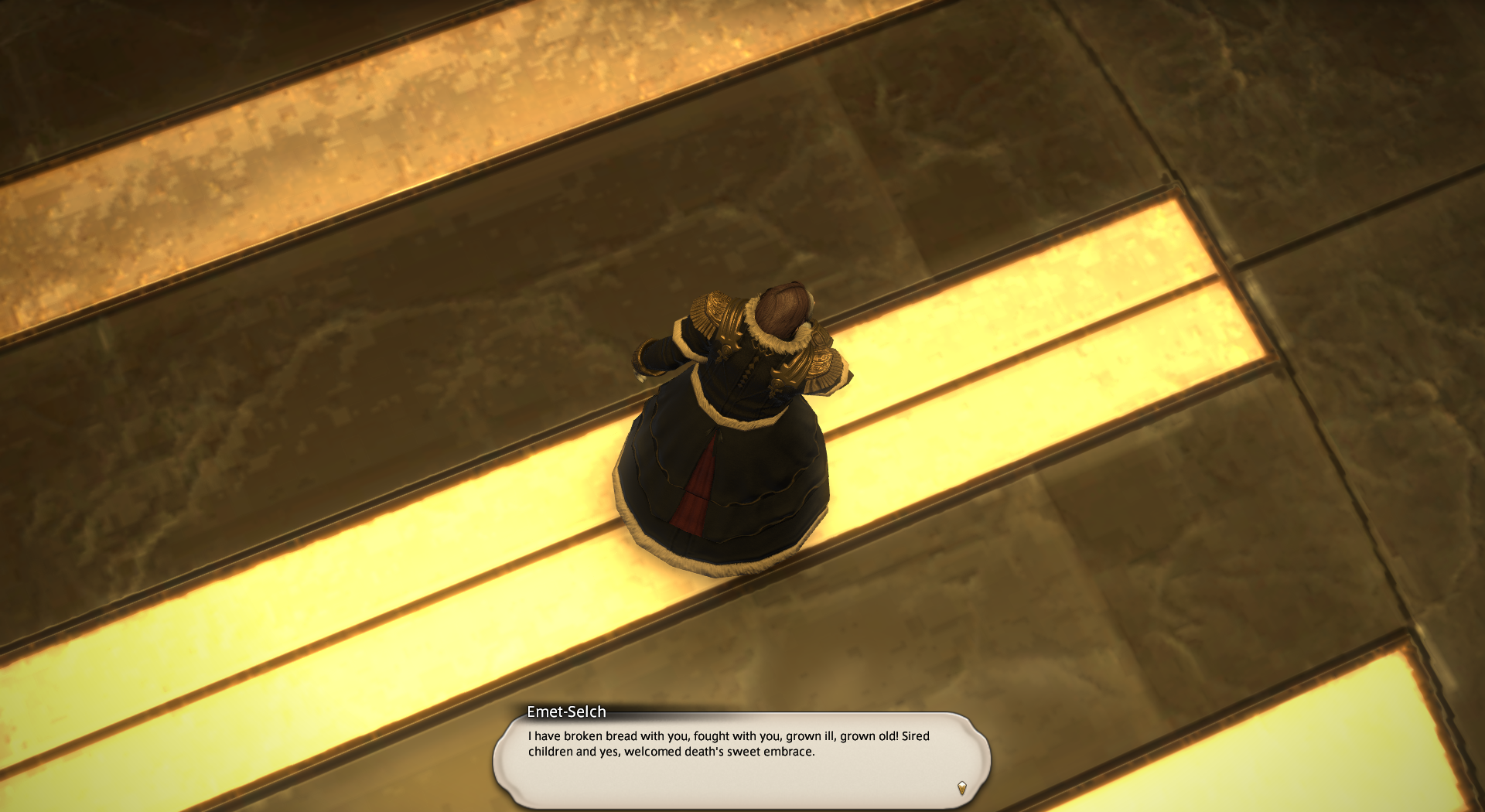 Part of what makes him so interesting is that he is, in the truest form, the foil to your character - your mirror. As an Ascian, long ago he beheld the end of the world, which occurred at the behest of the fight between the deity-like figures known as Hydaelyn and Zodiark and resulted in his world shattering into fourteen different shards. In his time, he was a member of the Convocation of Fourteen – something akin to a governmental body that served the grand city known as Amaurot. As one of the few surviving convocation members, he, like you in the present, has taken it upon himself to save his people because he is one of the very few who can.

Also like you, he has put in the blood and suffering to do so. When the sundering occurred, he and the other members who joined him in serving Zodiark sacrificed half of their people to appease the deity. To then replenish the world, they culled half of those remaining. He birthed the Garlean Empire, the largest world power of Eorzea, to sow enough chaos to bring about another umbral calamity and usher Zodiark’s return. He has invaded lands and people, captured and conquered. He has watched loved ones die, played a role in those deaths, and inflicted suffering while trying to bring peace to the ones he values.

Sephiroth’s greatest rival in popularity has always been Final Fantasy 6’s Kefka, who is favored among many for his whimsical personality, as well as having actually succeeded in his goal of bringing about the world’s destruction and ascending to godhood. But Emet-Selch marks a new era of nuanced writing for the series and its villains. He is a god, and godhood has only meant the burden of saving his people; he is unpredictable - so much so that he allies himself with you, calls you a friend, and saves one of your comrades in a gesture of good faith as part of his plan to earn your trust for his own gains. He has lived the world’s destruction, and it was a catastrophe, not an event that signified power. He only aims to recreate that ruin to, in his view, save the world. 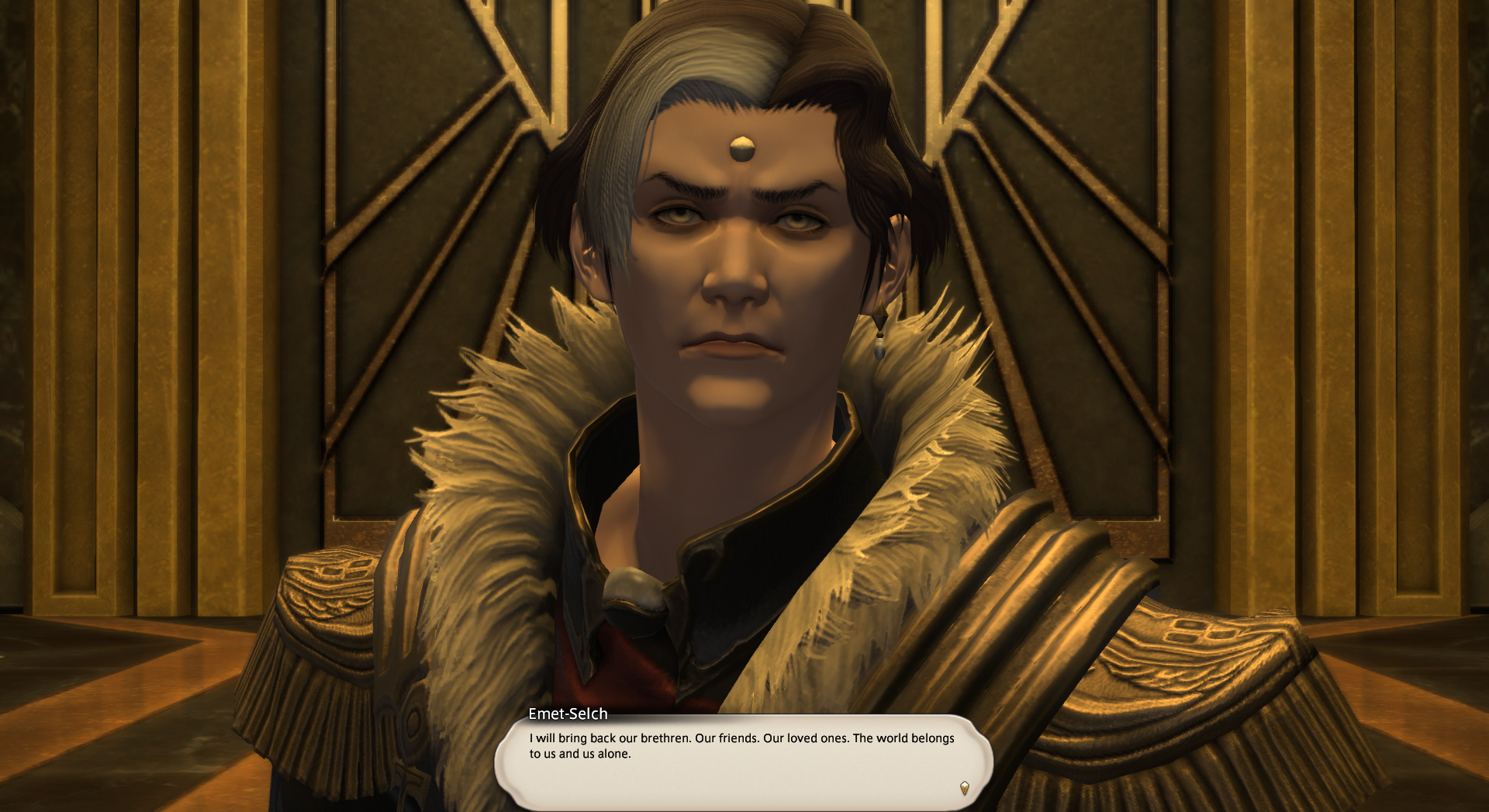 Perhaps he has resonated so deeply because he speaks to our modern day anxieties. Like Emet-Selch, we have had to powerlessly watch as our world literally burns. As you navigate the final dungeon of Shadowbringers, which is his recreation of the final days of Amaurot, it’s easy to see in your surroundings the Australian wildfires, the collapsing buildings of Puerto Rico after Hurricane Maria. To see in the people fleeing for their lives, being crushed by the collapsing structures, the millions of human beings trying to escape war and death from one corner of the world only to find more of it elsewhere.

One day, life on Earth will end as we know it - and, considering the cowardice of governments in halting climate change, humanity might bring about our planet’s sixth mass extinction. You watch and realise you’re no hero - you’re only looking at a tragedy that has already been set in stone.

Or perhaps it’s because we can equally see in him the bigotry that has become a normalised part of our everyday lives during an age in which we are - willingly and not - exposed to supremacist ideology. He sees those who aren’t Ascians as reflective of the shards in which the world was split into: broken, fragmented, incomplete. “I do not consider you to be truly alive,” he casually explains. “Ergo, I will not be guilty of murder if I kill you.”

It’s not hard to see how he has come to this result: he lived in a progressive utopia, where there was “no conflict born of want or disparity”; where the “differences paled into insignificance next to all we had in common.” People engaged in respectful philosophical debates and had the power to invent whatever they imagined, which was often for the greater good of the people. There was no famine, war, or suffering. Conflicts were resolved not through nuclear warfare, oppression, and fear mongering, but through diplomatic discussions and ambitions for peace and prosperity.

But it doesn’t mean he’s justified. He’s so stuck in what he believes are the better days of before that he has obsessively recreated Amaurot and its people to the closest detail possible. This illusion resides in the deepest depths underwater, where no one can travel to and challenge him on his beliefs. And in this self-created illusion is where he finds more humanity than in the real people on the surface who are simply trying to survive and experience what life has to offer. 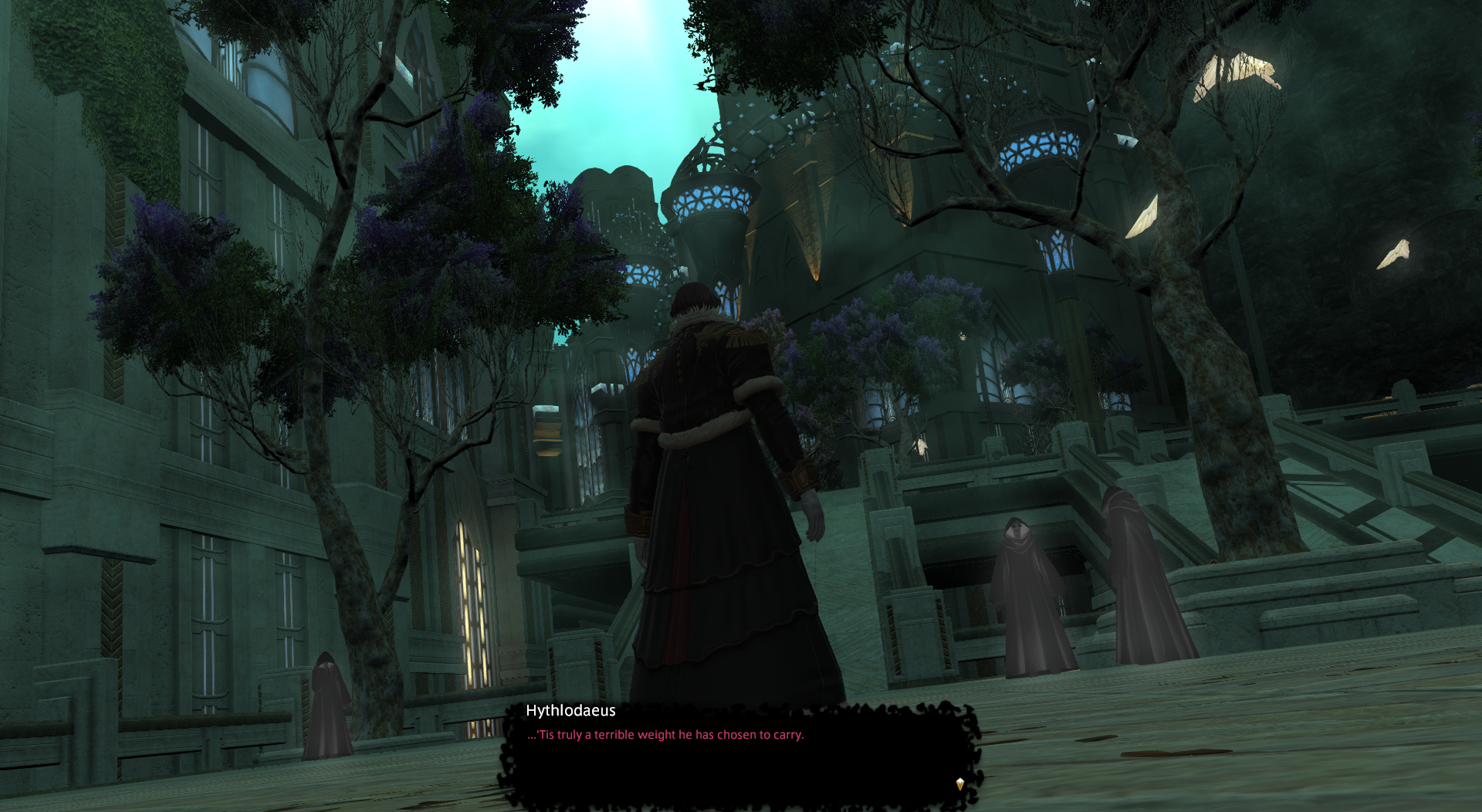 Despite his incredible nuance, it’s important to make no mistake about Emet-Selch: he is not merely an antagonistic force, but a villain with morally reprehensible ideas, goals and actions. The writing never justifies his beliefs or methods, or even ultimately depicts him as anything but someone who must be proven wrong and defeated. As Natsuko Ishikawa, the main scenario writer for Shadowbringers, once said in an interview with VG247, he is, “someone that thinks they’re in the right when in reality, their actions are monstrous.”

But he is also a person - a deeply pitiful one who has lost everything. His death feels less like a resounding victory and more like the last whimpers of a man who has already long been dead. In the end, he speaks not of himself, but of his people; of their triumphs, hopes, and despair. He asks of you only one thing: to, in a world that is quickly moving forward without them, remember that they existed. It’s not so much a final wish uttered in the dying gasps of a god rather than a human being who, like any other, fears being forgotten in a universe too vast to care. Even if he was destined to fail in his mission and get nothing more from the universe, the writing gives him the opportunity to have his humanity seen - to be remembered. And, while only time will tell, if the fans of Final Fantasy 14 are anything to go by, he’ll be more than just a memory.