We finally got to play as V, Devil May Cry 5's mysterious new playable character - and he's quite unlike anything the series has seen before.

Back when Devil May Cry 5 was announced, fans were almost immediately teased with the fact that they didn't yet have the full picture. There was series mainstay Dante, and Nero, co-protagonist of DMC4 - but it seemed the long-awaited sequel had yet more secrets to hide. A little later we got a first glimpse of a mysterious new figure known as V, the third (and presumably final) playable character in DMC5.

VG247 has played and covered DMC5 a few times before. Kirk first went hands-on with Nero, and later on I played a bunch of the game as both Nero and Dante, but V remained a mystery beyond some vague rumors and interview hints as to how he plays. Now, however, we know: and he's a brilliant twist on the core formula of stylish action games like Devil May Cry.

"We knew that character had to be different from Dante and Nero, or else there's no point" - Hideaki Itsuno

After playing, I got to chat to DMC5 director Hideaki Itsuno about the genesis of V's unique style of play, and his explanation of how they came to it is as good as any.

"Devil May Cry 4 had two playable characters, Nero and Dante. So we said for Devil May Cry 5, we wanted a new character. It all started with that," Itsuno explains. "We also knew that character had to be different from Dante and Nero, or else there's no point. Right at that same time, I had the idea of taking what you need to protect and what you need to attack with and separating those two elements."

This is the core of V. Typically in Devil May Cry, you're balancing your use of the single most vital resource given to you - your playable character. With Dante or Nero, you're using them as an offensive outlet against the demon hordes, but you're also dodging and weaving, trying to stop that same character from being injured. What if you separate those two elements, though? How much does it change the core of the game?

"That was ultimately how we came up with the idea for V," Itsuno says, going on to explain how V attacks through his demonic allies. "You have what you need to protect over here, but then you have Shadow, Griffon and Nightmare over here attacking, separately. That all kind of combined into this idea, and at the same time it fit with our ideas of what the story could be.

"Really, all these elements - the design, the story - they all coalesced together right at the same time right at the beginning of development." 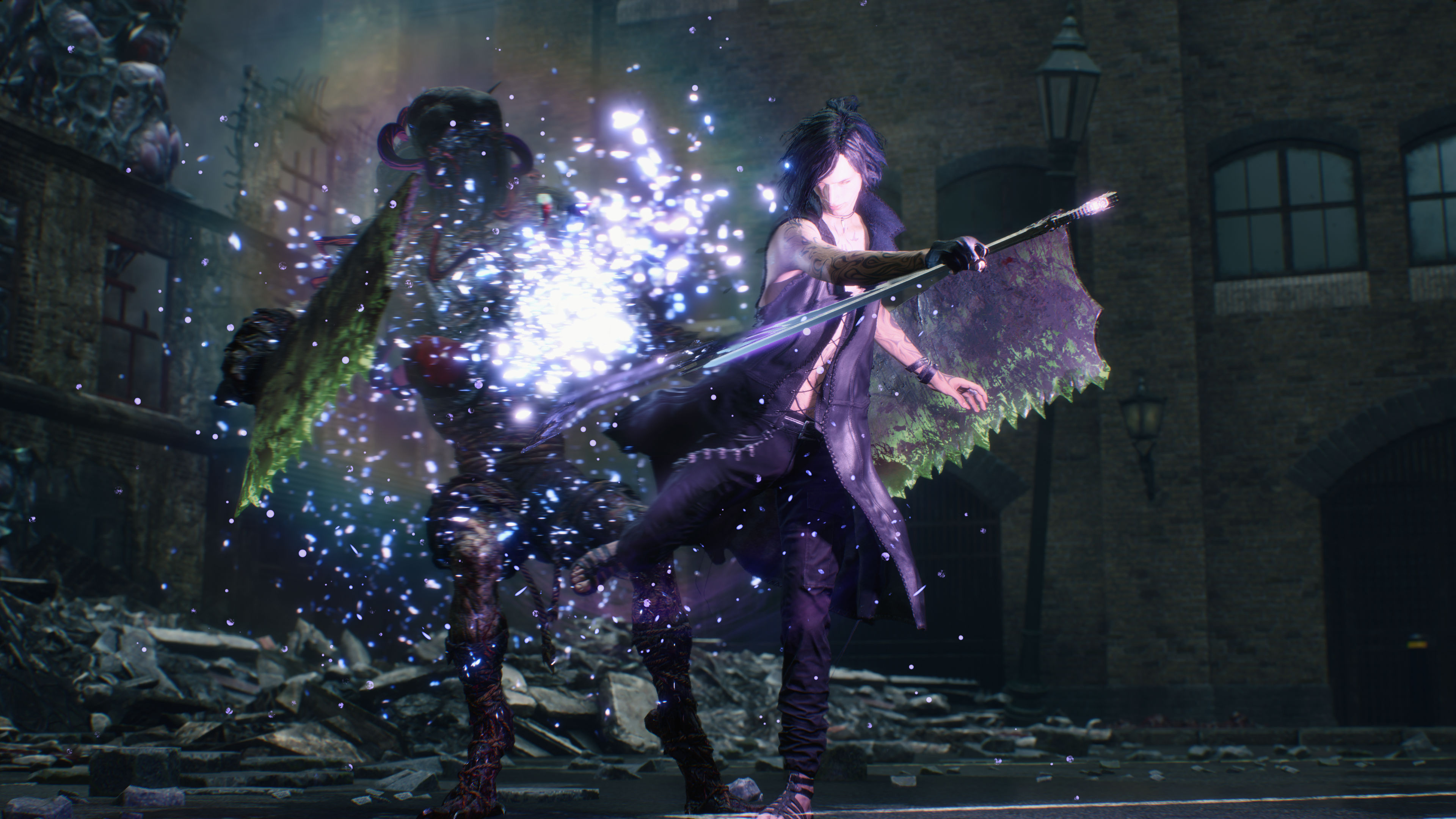 Shadow, Griffon and Nightmare are the three spectral creatures V attacks with - his familiars. Shadow and Griffin are with him all the time and have unique properties. Shadow is a panther that attacks up-close, appearing from nowhere to swipe at your enemies. Griffon is a bird and serves a sort of dual purpose, offering up a suite of ranged elemental attacks but also assisting V with movement. A large dodge might involve V grabbing Griffon's claw to fly to the other side of a combat arena, for instance. Each familiar has their own additional skills to purchase in the store with red orbs (which despite microtransaction concerns felt very fairly scattered throughout this demo), so you'll be able to prioritize upgrades for the one you prefer.

While the familiars can be powered up with Devil Trigger, they can also be knocked out of battle temporarily if they take too much damage at once. They automatically heal over time, and do so more quickly when they're close to V. The regular health bar is entirely dedicated to V himself, who isn't a fighter at all. To go with the idea of V as vulnerable compared to the others, he can even read his book mid-battle to charge his Devil Trigger gauge - but doing so leaves him open to attack. It's all about that risk and reward.

There's one last wrinkle in all this that makes it genius. The familiars can't finish off enemies on their own. Not even Nightmare, the Devil Trigger Level 3 summon, can do this. Only V can deal a killing blow. This makes combat with V a delicate dance of weaving in and out of range while attacking with the familiars, then dashing back in to land a killing blow on a weakened enemy before dashing away once again. V can teleport to injured enemies to finish them with a lock on and a button press, but then can't teleport back out of the thick of things - that's left up to you. It feels bloody great. 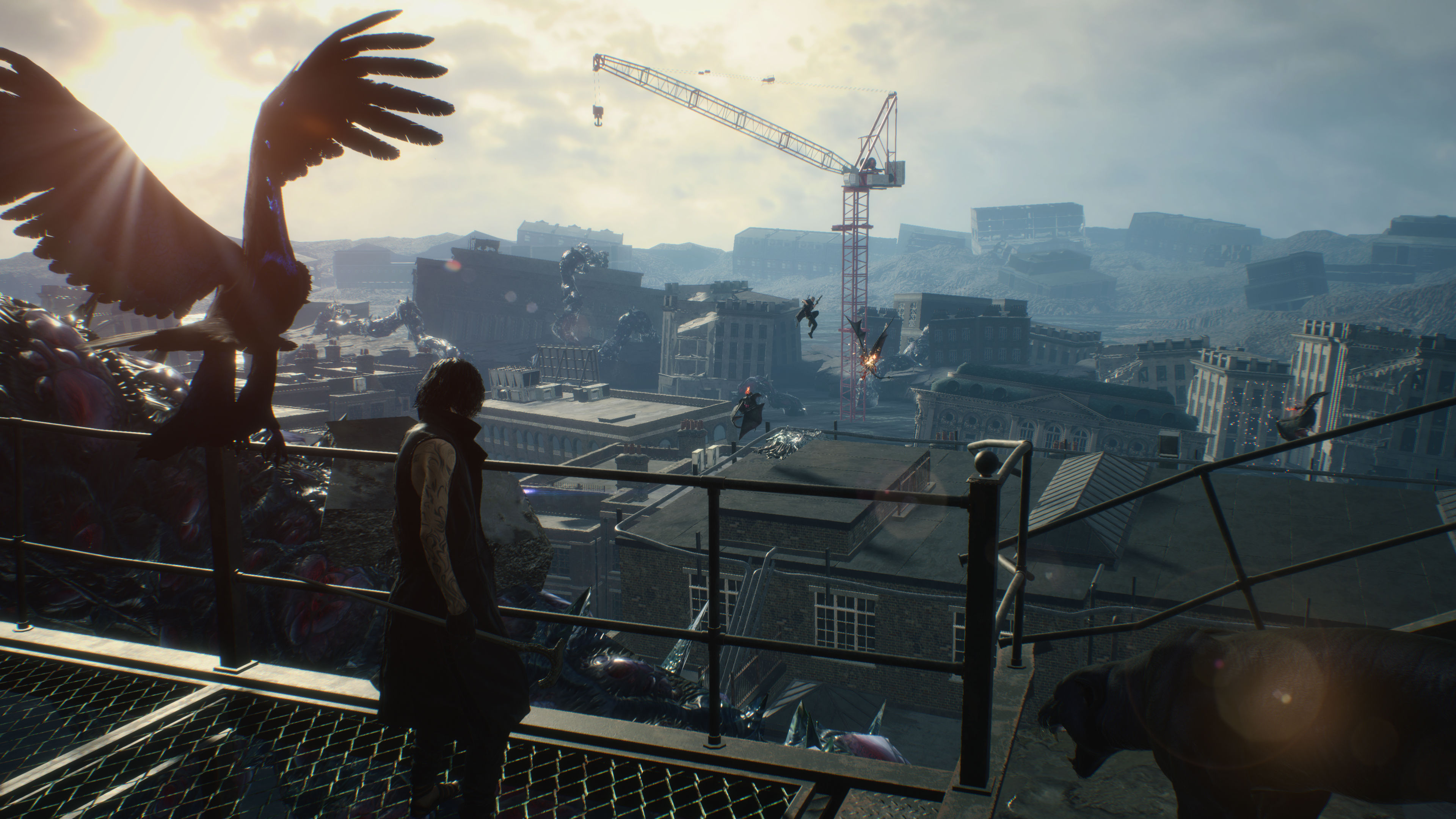 "You end up doing a sort of gymnastics with your thumb. I can see how that can be something that'd be a little complex for people. It's completely different - but hopefully it's fun" - Hideaki Itsuno

It also feels really different. DMC has always been a series with a high skill ceiling for nailing those triple-S rank finishes in combat, but with V everything is inherently more complicated and challenging. There's more on screen to watch and worry about than with Nero or Dante, and sometimes you're doing three things at once; dodging with V, holding down a button to charge a ranged lightning attack with Griffon while also rocking the edge of a thumb back and forth rhythmically on another button to make Shadow attack.

Pretty quickly I found myself gripping the controller in a hold more akin to how I play a fighting game when there's no arcade stick available. And that's an interesting twist for a game of this type. In the likes of DMC and Bayonetta, I can typically hit a rhythm and bash out combos in a more robotic way after a bit of practice, but V feels like he'll always require a bit more concentration even for the most seasoned players. There's quite a bit to keep track of.

"It wasn't really intentional, but you're right," Itsuno says when I ask if the similarity to his work on fighting games (including Street Fighter Alpha, Capcom vs SNK and Darkstalkers) had been useful in balancing the sort of thinking required to make a design like V's work. "You do have to think about how you might be charging one button while hammering a rhythm on another. So you end up doing a sort of gymnastics with your thumb. I can see how that can be something that'd be a little complex for people. It's completely different, but hopefully it's fun."

For what it's worth, I think it is. In fact, V might be my favorite bit of Devil May Cry 5 so far, though this hands-on also left me with other exciting notes as we look toward next month's launch. For one, Nico is everything FF15's Cindy should've been, a not-embarrassing version of the wise-cracking southern mechanic trope that's shaping up to be one of the most endearing new characters of the year. Dante is still bad-ass, too, but the other real stand-out aside from everything about V is Nero's Devil Breaker. There definitely appears to be a good range of unique attacks here, and I can't wait to see what the really skilled DMC players do with them.

Devil May Cry 5 is out on March 8, and at this point we're just ready for it. After Monster Hunter World and Resident Evil 2, it really does seem like Capcom's winning roll is set to continue.