Stylish action games are all about lightning-fast combat. It’s a genre where your moveset is so broad that it only reveals its true depth over multiple playthroughs. Devil May Cry 5 is one of the most technical yet.

Rather than having just one character to master, here we have three. Newcomer V is weak and attacks with spectral animals called familiars. The twist is that V has to personally finish each enemy off, meaning he must get in and out of range constantly - he’s only effective when an enemy is staggered. Those familiars - which are partly controlled by AI - can be knocked out of action temporarily, too, causing the grotesque hordes to focus on you.

You have to constantly keep V out of danger: a horizontal dodge causes you to skate along the ground with your panther familiar, Shadow; while dodging backwards summons your bird, Griffon, to fly you to safety. Not only does the timing of these affect V, but they cause your familiars to disengage. Knowing when to pull them out is key.

V is all about spatial awareness, keeping an eye on health meters, enemy locations, spotting clusters for area of effect opportunities, and charging up your Devil Trigger gauge by reading poetry (yes). Get the gauge to at least three bars and you can summon Nightmare, a colossal familiar that bursts through scenery and autonomously fills the scene with explosions and laserbeams. Conjuring this massive creature instantly revives Griffon and Shadow, so timing is paramount. 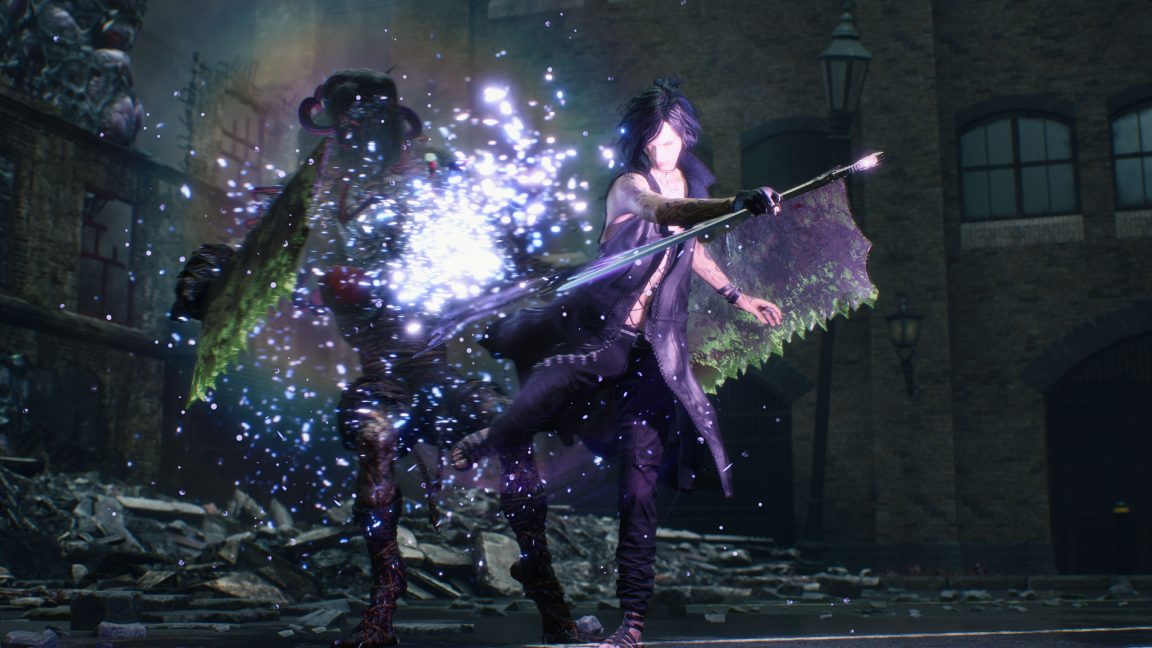 Though he’s the most complicated on paper (you’re essentially controlling three things at once), V feels built for newcomers. There’s some nuance in how you can charge up one familiar while moving out of danger and hammering attack with another, but he’s the easiest character to parse. Racking up those SSS ranks is a doddle - especially when you learn to chain together finishers, teleporting between enemies and driving your magical cane into their hides.

The moody newcomer is fun to play for a while, but his lack of depth makes him the weakest of the roster. His familiars can also be a little frustrating, since you never have full control over their range and they don’t always do what you intend.

Things are much better when it comes to Nero. The cocky youngster's moveset seems simple on the surface - one button swings your sword, another fires your gun, and another uses your Devil Breaker: prosthetic arms with varied abilities - but he’s more complex than it appears. You can hold buttons to charge up gunshots, launch enemies into the air, pause between hits to twist into a different combo, rev your sword to Exceed and unlock a fiery new moveset, and pull enemies towards you with a locked-on grab. But it’s in those Devil Breakers where Nero comes into his own.

You equip a set of these prosthetics before each battle. There’s a Breaker that grabs and pummels enemies, one blasts out an electric charge, another burrows into demon flesh, one has a rocket-powered punch (which you can also ride), one fires out kinetic blasts, launching you through the air, and there’s another that fires out multiple whips, lashing enemies all around you. Each has its own purpose and ideal scenario for deployment. They also all have a charged technique that overclocks and breaks them once triggered. If you’re hit while a Breaker is active, it breaks, forcing you to equip the next. You can also manually break them to send out a powerful blast, damaging enemies around you - this also works to escape from otherwise unblockable attacks. 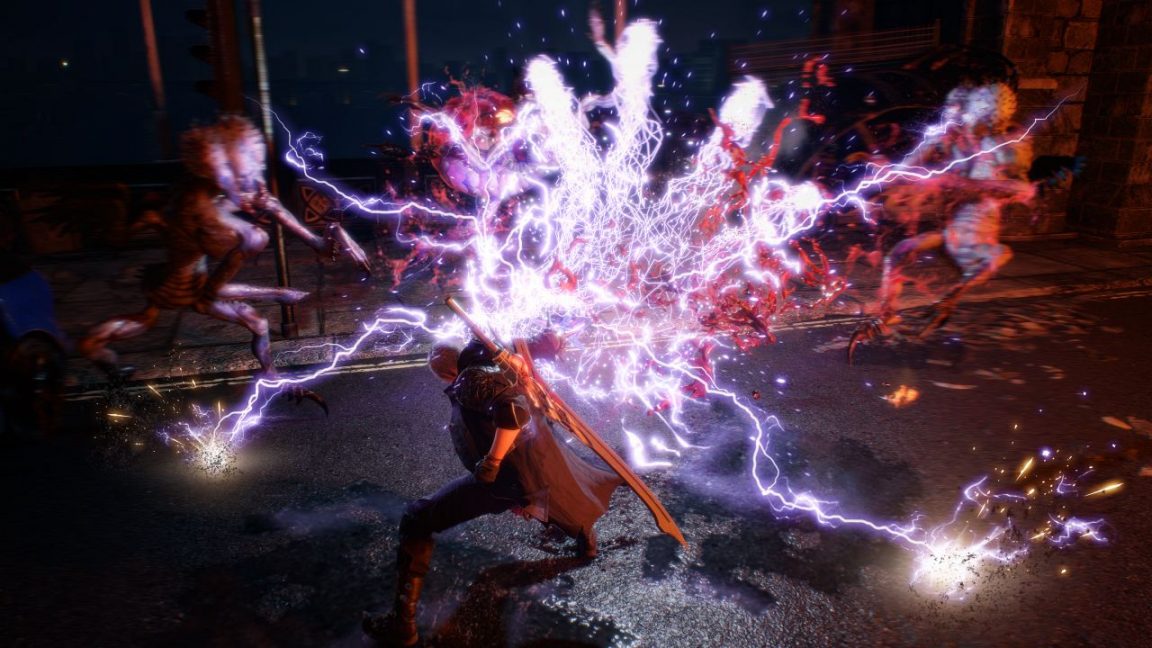 The only way to get to the next arm in your inventory is to purposely (or accidentally) break the one you’re using. The idea is that Nero’s moveset constantly evolves as you play. When you want to switch, you have to sacrifice and commit. I can see high level players having a lot of fun with locking down the perfect Devil Breaker setups for each level, knowing exactly when to switch during each encounter.

There’s a boss fight early on against a huge demon with a gaping mouth for a belly. In my first playthrough, I barely scrape through. In my second playthrough - on the more difficult Son of Sparda setting - I stagger him by exploding my Devil Breaker, then use the Buster Arm to pick him up by his tail and spin him around, launching him across the arena. It’s hard not to have Nero’s shit-eating grin plastered over your face when you’re lobbing a ten foot demon like a trash bag. Most games become less interesting as you replay them, but DMC 5 only gets better.

It wasn’t until my third playthrough that I started really getting the hang of jump cancels, a high-level technique that allows you to stay in the air indefinitely. This is triggered by using a move called Enemy Step to interrupt any animation in the air. It’s one of the best ways to rack up an SSS rank combo, and there’s little more satisfying than picking off enemies by pulling them up into the air one at a time as their friends flail at nothing on the ground below. Some hardcore fans have been bemoaning the lack of ‘inertia’ - an unintended mechanic that allowed for more aerial showboating, a side-effect of DMC 4’s physics - but who cares when you can flow from a jump cancel straight into a rocket ride and back again?

Despite the nuances of these two characters, though, it’s no accident that the game gives you control of series staple Dante last. The demon hunter is like a Swiss army knife where every attachment is secretly another, smaller Swiss army knife. He’s more versatile than duct tape. He has four fighting styles, and by the end of the game has four melee weapons and four ranged weapons. All of the weapons interact with the styles, and you can switch between styles and weapons with the tap of a button. To complicate things further, some of the weapons have multiple forms. 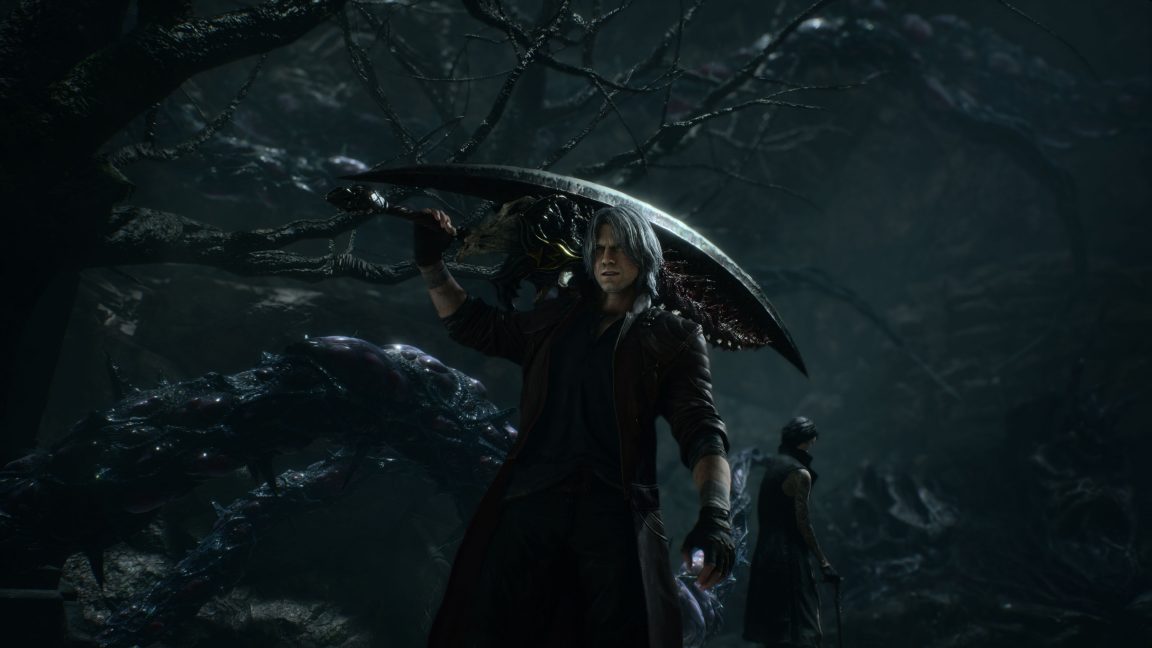 Take the Balrog, Dante’s demonic gauntlets: pulling back on the left stick and pressing attack at the same time switches it between Kick Mode and Blow Mode, allowing him to flow from capoeira-style kicks to boxer-style punches in an instant. Hitting Circle while in the Swordmaster fighting style deploys a different move depending on whether you’re punching or kicking. You can also hold attack while in Blow Mode to trigger the Welter Move, allowing you to bob and weave, following up with powerful body hooks and uppercuts like a demonic Mike Tyson. While Dante is just as devastating in the air as Nero, he offers plenty of reasons for you to stay on the ground as well.

Pair Welter Move with Trickster - a fighting style for swift escapes - and you can dodge, weave, and zip around the arena like a kid at a soft play centre. Use it with Royalguard and you can make up for mistimed dodges with blocks and counter attacks. Whatever firearm you have equipped is layered over this, as well as the ability to switch to Gunslinger to alter the abilities of your ranged attacks. Oh, and you can turn into two different demon forms based on two separate power gauges, with one charging the other. It’s ridiculous, but it somehow remains intuitive and never feels overwhelming. Capcom is a master of the genre it spawned.

There’s an element of learning combos and button inputs, but that’s not really the focus - DMC 5 is about making split-second decisions constantly, reacting on the fly to breakneck encounters. None of the moves are over-complicated - the complexity comes from knowing how to stitch them together effectively. Techniques are often a case of pausing attack strings or flicking the stick at the right time. When you’re focused, it’s like you’re being controlled by some unseeable puppeteer. It’s intoxicating.

It looks incredible in motion, too. Even with the online components that see other players fighting in the distance at parallel points in the story, the action doesn’t slow down. It’s as slick and smooth as a stylish action game should be. The animations sell it even more, from the way Dante and Nero slide across the floor to turn on a dime, to how V strokes the orbs of his downed familiars if you stand closeby. 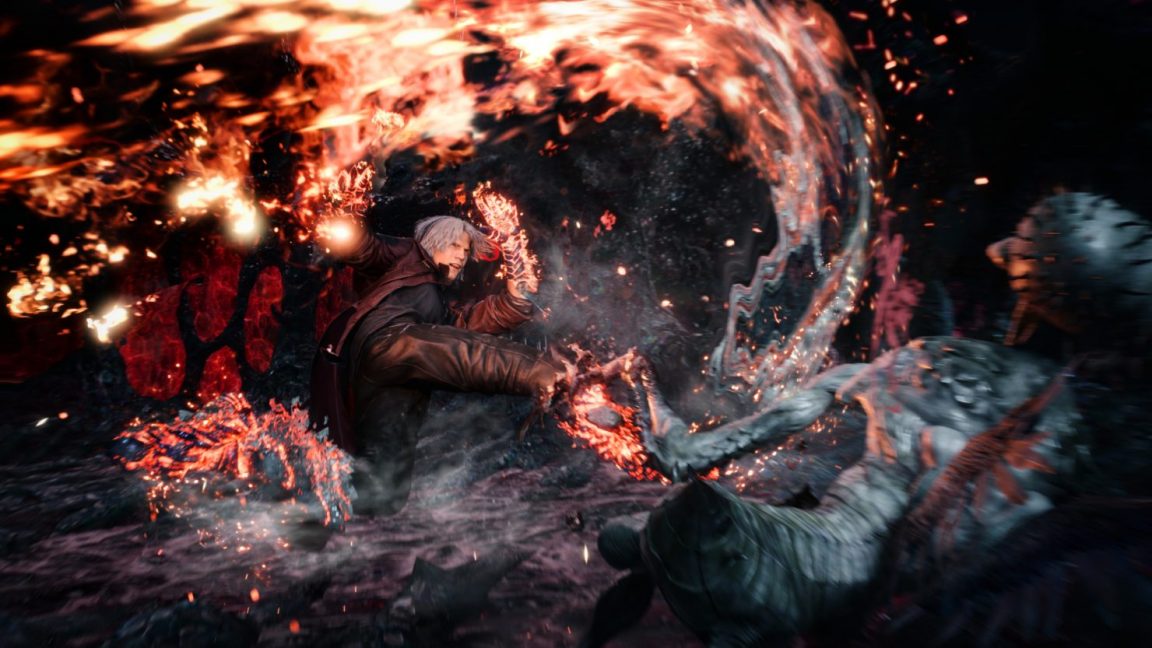 The only thing that lets down the presentation are the environments. Everything looks sharp - this is the RE Engine, after all - but the environments are dull. Broken city streets soon make way to dank sewers, and most of the second half of the game is spent roaming the identical corridors and hexagonal arenas of a demonic nest. Some of the secret missions, unlocked by lining up symbols in the scenery, are just as unimaginative. Collect all the red orbs in a library? No thanks, I’d rather be battering demons with this nunchaku that turns into a lightning staff.

Likewise, the story doesn’t go anywhere interesting. It’s pure fan service. The series’ returning women - Trish and Lady - play simple bit parts (and also show you their bits and parts). They’re around for the beginning of the game, they disappear for story reasons, then turn up again later - completely naked - for other story reasons. Lady’s real name is Mary, but the moniker Dante bestowed on her is fitting here: she doesn’t really have a personality, she’s just a woman for boys to ogle. Same for Trish, a demon warrior reduced to flesh. It’s a dated depiction of women characters and doesn’t do justice to these previously playable badasses at all.

By playthrough two, though, you’ll be skipping the cutscenes to get to the good stuff: that action. Like previous DMC games, this is designed to be played through multiple times. Difficulty in games is often wielded like a badge of honour. In DMC, it’s baked into the design. Whatever difficulty you start on (Devil Hunter here), you keep all your upgrades for the next playthrough. So while the enemies get more difficult, your characters grow stronger in tandem. 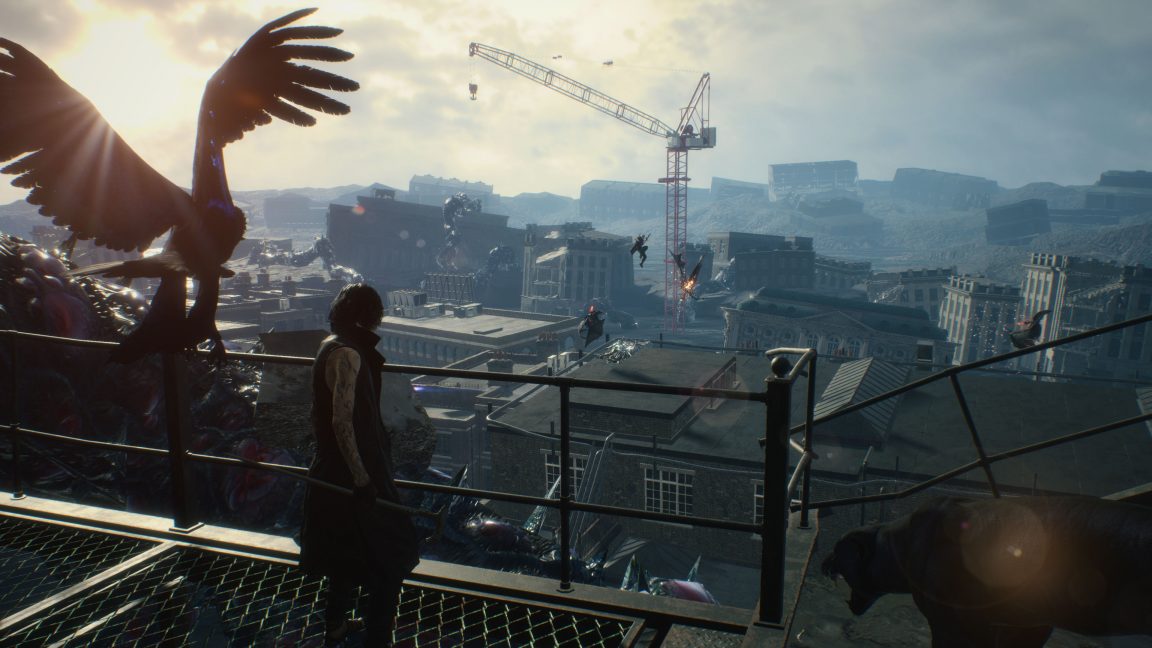 Son of Sparda mode, unlocked at completion, is not just about giving enemies more health and letting them hit harder. Instead, it changes up the mix of enemies, throwing different variations at you earlier on and keeping you on your toes. Increasing the challenge really lets you see what you've learned and it keeps the combat interesting through subsequent runs.

Though it’s not without its flaws, DMC 5 is a game where action is king. A layperson might think God of War and DMC 5 exist in the same genre, but they don’t. DMC 5 isn’t about going on an epic journey, meeting characters, and uncovering the mysteries of a world. It’s about riding a fucking rocket, flying it between enemies, flipping over a demon and shooting it in the head. It’s about pulling up your hood, taunting the hordes of Hell, and somersaulting sideways at the last second before launching into a flurry of sword strikes. It’s about murdering ten demons without your feet ever touching the ground. It’s about fighting and looking cool while you do it. In that, it’s an unparalleled success.