It's a startling departure from series form, but Alex Donaldson find plenty of the old, metal-tearing magic in Burnout Crash. 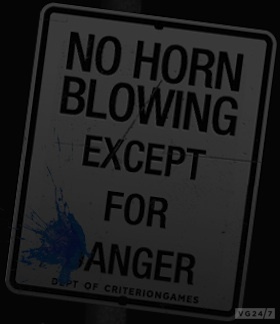 The first spin-off from the core racing series.

Played from a bird's-eye perspective, but includes Burnout's trademark destruction.

Began development as a Wii title; now expected via Xbox Live and the PSN by the end of the month.

Based on the first description we get of Burnout Crash before our hands-on demo at gamescom 2011, most people would be hard pressed to guess that it was a title in the destruction-heavy racing series – even a spin-off.

“The whole game is really pinball inspired,” the PR Coordinator Evan Dexter tells us as he shows us how to play.

“It’s all about pinball gameplay – game show style audio and sound, too – if you can kind of picture the car like a pinball except you can shoot it around and explode it.”

That’s a far cry from the open world, racing-based Burnout Paradise, Criterion’s last release in the franchise, but Burnout Crash is a new take on the series. It highlights the much-loved ‘Crash Mode’ – absent from Paradise – and builds it into a downloadable Xbox Live Arcade and Playstation Network title of its own.

Taking place in a top-down view reminiscent of the first couple of Grand Theft Auto titles, Crash goes further other the top and is more deliberately ridiculous than any previous Burnout game.

"In previous Burnout games Crash Mode was just crashing traffic, but because we have a more fun and over-the-top feel to this game this is now about crashing everything – the environment, the buildings, the traffic, the signs, everything,” Dexter explains as an explosion from an on-fire car rocks a nearby building to its foundations on screen.

The controls are ridiculously simple – at the start of the level you’ll have control of a car hurtling towards an intersection. Using the analog stick you’ve got to steer the car into the worst possible initial crash you can manage – which then tees you up for the rest of the level nicely. Back from Burnout 3 is the Crash Breaker, a crazy after-touch mechanic that lets you explode your car when a meter is filled and redirect it towards fresh targets for more destruction.

The Crash Breaker refills when you do damage to other cars or the environment, so you’ll be watching the traffic coming in and ensuring you can get your car to it with an explosion if the road isn’t already blocked. In the mode we play, Road Trip, letting five cars pass through the intersection untouched means its Game Over.

“The goal for a high score is to really spread out the traffic and the destruction across the intersection to make it hard for cars to get through,” Dexter, who has the highest score on the gamescom demo machine, tells us.

“Let the traffic do the work for you. The traffic will keep piling up, exploding – the more explosions there are, the higher your multiplier is worth.”

That might make the game too easy, though, so Criterion have added some extras – known as ‘Super Features’ – to throw a spanner in the works of your perfectly constructed traffic trap. The first on the level we play, triggered by hitting a score threshold, is a big fat yellow bulldozer.

Dexter quickly warns me that it’s about to destroy our traffic barricade, carefully constructed from the burnt-out carcasses of cars.

“The bulldozer just comes right through the level and is almost unstoppable – but the better you do to stop it, the more you damage it, the more points you get.”

Acting as something of a reset button, the dozer's taunting presence is accompanied by ‘Push It’ by Salt n Peppa - an interesting soundtrack choice.

“It’s all about score, all about crazy soundtrack – we’ve got Salt N Peppa, Spandau Ballet, The Weather Girls,” we’re told.

As the level wears on things become more hectic. Cars get past, and three of our five chances are lost. With the next Super Feature the game gives us a second chance, though - it’s an Ambulance. The goal with the Ambulance is to get it through the intersection untouched – so now instead of creating barricades, we’re desperately shoving them aside. If it passes, it gives you an extra life.

Come the end of the level I’m granted one more Super Feature – a huge hurricane that wipes the map clean. How the hurricane performs and how many points it’s worth depend on your performance throughout the rest of the demo, but it gives a nice big finale to the chaos of the level. At the end, a score is displayed and pumped into the AutoLog, which returns from the Need for Speed series.

“This has AutoLog recommends just like Hot Pursuit did – you’ll have all your friends list, top scores, stuff to beat – lots of competition, but we’ve added a new feature for Crash,” Dexter says as he guides us through the menus.

“The guys at Criterion have added AutoLog challenges, which lets you go head-to-head with your friends list, challenge them to a certain location and game mode, and then the next time they log into Xbox Live or Playstation Network they’re gonna ping saying ‘this person challenged you on this game mode on this location, here’s the score, you’ve gotta beat it.’”

Effort has been put into ensuring that score attack-style challenges drive the replay value of the game by ensuring that those aspects are always forward facing. When playing a level, the game always displays your friends list high score right by your current score, so you know what you’re working towards.

“That gives us social competition but on your own time, on your own schedule – you don’t have to all be online together to compete. Whenever they log on, they’ll see your challenges and they can play to beat them.”

When Burnout Crash was revealed a big emphasis was also placed on the fact the game will also come packing Kinect support. Every single mode in the game can be played without the need for a controller – you drive during the initial crash with your hands, jump to explode, and move around in place to control the car when it’s edging about after explosions. While we didn’t get to try it at GamesCom, there’s also a Kinect-exclusive mode known as Party Mode.

“You can get fourteen people up on one TV, all playing at the same time. You create two teams of seven, split up and everybody rotates in and out,” Dexter elaborates – though there’s not enough room in this demo area for two teams of seven.

“You can get fourteen people up on one TV, all playing at the same time."

“Its great fun – it’s one of those things that’s great to laugh with – if you have buddies over it’s a really great sort of party game.”

Score attack gameplay is always strangely grabbing, and Burnout Crash is no exception – after the demo other appointments had to be met, but our thoughts kept returning to ways to destroy more stuff, rack up more multipliers and obtain a higher score.

This over-the-top, colourful, top-down title might be a bit of a strange swerve away from previous Burnout titles on paper, but it feels like a perfect downloadable version of the Burnout formula in your hands.