The 2011 Spike VGAs were meant to celebrate the year's best games and hype future releases. Instead, Johnny Cullen argues, they played to stereotypes in the worst possible way.

For every step Sunday night took forward - Miyamoto, Blizzard, some of the unveils - the VGAs took 20 back. We'll still be getting up in the middle of the night for the announcements next year - every games news journalist will - but there needs to be change. A re-run of this year's show would be less than welcome.

It delivered on the former. The awards themselves? Not so much.

Given previous form this isn't much of a surprise, but 2011's VGAs took stereotypical stupidity to an entirely new level. Put it like this: I don't want to see Felicia Day doing some silly gimmicks; I don't want to see some dude who ripped at last year's awards on YouTube turn up and trash talk at a Spike exec as if he was cutting a WWE promo; and I don't want to see a bunch of kids from some unknown TV show shout about what they won before showing a new game (the group I'm referring to introduced Alan Wake's American Nightmare).

I don't care about how much LL Cool J likes Mass Effect, and I sure as hell don't care about teabagging live on stage. Was there any need for it? If there was one thing that stood out, that played right into mainstream gamer stereotype. We don't need these things in a gaming awards ceremony. A bit of humour in a show is fine, but this was beyond cringeworthy.

Do we need celebrities in game award ceremonies? Do we really need Hulk Hogan, will.i.am, Charlie Sheen and others presenting awards and unveiling games?

On the one hand, we want to see the developers get their 15 seconds of fame rather than those who've had it for most of their lifetime. On the other hand, the majority of the VGA audience probably isn't that well versed in the industry. They won't know - and in all likelihood, care - about the Ken Levines, Hideo Kojimas or Cliff Bleszisnkis of the world as much as the hardcore does.

I'm still undecided on the subject, but there needs to be at least some sort of balancing act. On Sunday, we didn't get it.

And what about the actual awards? This was a shambles. Very few of them got handed out on stage. By my count, there were only three: Rocksteady appeared for Batman; Infinity Ward and Sledgehammer for Modern Warfare 3; and Bethesda Game Studios for Skyrim to pick up GOTY. For everything else, it was held either pre-event or shown in a quick edit.

Fair enough; there won't be time to do all of the awards on stage. That's the reality of it, as is the case for most ceremonies. But you have a big gaping problem if you go through a majority of them before and during the show and have them run in a montage to secure more time for announcements and stupid antics. The "awards" part of this year's Video Game Awards was an afterthought.

In fact, it was something picked up on by Batman: Arkham City VOs Mark Hamil and Tara Strong. Both nominated for their roles as Joker and Harley Quinn in the Best Performance by a Human Male and Female categories respectively, the pair lost out to Stephen Merchant and Ellen McLain of Portal 2 for their roles as Wheatley and GLaDOS.

Hamil said in one tweet: "Weird VGAs! Don't mind losing but I'd like to know when it happens. Did I miss something? Award given off-camera? Tara and I in lousy seats - BOO!" 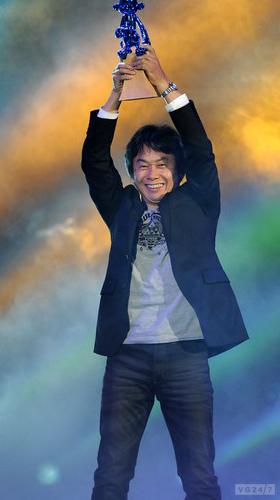 Saturday marked the eighth VGA event since its debut in 2003.

The show is fronted by US journalist and GameTrailers TV host, Geoff Keighley.

Skyrim, Batman: Arkham City, Uncharted 3 and Portal 2 were the big winners this year.

Naughty Dog's The Last of Us, Metal Gear Rising from Platinum Games, Epic's Fortnite and BioWare's Command & Conquer: Generals 2 were the major announces.

Strong then added in another: "I'm sorry, but to have @HamillHimself sit way up in the bleachers and not even MENTION his nomination? Shame on VGA..."

But here's the kicker: Strong's category - which McLain picked up in person - was awarded at the pre-show, streamed online on Spike's website. Meanwhile, Hamil's nomination was mentioned in a quick montage.

It's an awards show. It's in the name: Video Game Awards. You either do the awards or you don't.

Or here's a better solution, seeing as the ceremony itself seems to be a event for unveils and trailers rather than awards: hold a separate showcase. One weekend in December, hold two separate events and air them on Spike and online.

On the Saturday, have the Video Game Awards, but without the announcements. No celebrities; just let the developers host the awards, categories and let them do their speeches. Let them have their limelight for creating the best games of the year.

A great example of that is Machinima's Inside Gaming Awards. Held the night before the VGAs, the mainly YouTube-fronted network focussed on awarding the games rather than make a song and dance about other things. OK, there weren't any developers to MC each category - only Machinima personalities - but the IGAs format of focussing on awards clearly works.

And then on a Sunday, hold a showcase for announcements and trailers. Have a mix of developers and celebrities. Satisfy more people in the process.

The only genuine moment of decency on the night was Miyamoto's appearance for Zelda's Hall of Fame induction. I don't think anyone was expecting him to appear personally. Considering the recent retirement speculation, it was lovely and heartwarming to see him on that stage with all his trademark enthusiasm.

Unfortunately, just as we were building a rosy glow, we realised Shigeru Miyamoto, the creator of some of the best-loved characters, franchises and games in history, was sharing the same stage as Charlie Sheen.

And there were Blizzard's three co-founders - Mike Morhaime, Frank Pierce and Alan Adam - getting their Gamer God award. No doubt deserving. Why am I griping with this? It was presented by American Pie's Jason Biggs and Shaun William Scott, who appeared to punch Biggs in the balls after signaling Morhaime, Pierce and Adam to the stage. Stay classy, guys.

Given we had ball-punching, it was no surprise the press was also sidelined. It's just a shame that 25 of America's most prominent games journalists - including Brian Crecente and Stephen Totilo of Kotaku, Chris Grant of Joystiq, Andy McNamara of Game Informer and OXM US EiC Francesca Reyes - picked the best games of this year, only to have their work overshadowed by teabagging, reenacting Fruit Ninja and too many unveils.

The saddest thing? This is all being organised by one of those 25 journos. Geoff Keighley has said countless times that this is a serious awards show for gamers. If that's the case, I sure as hell didn't see it on Sunday morning.

I met Geoff briefly at gamescom earlier this year on the way to the Sony press conference, when myself, Alex Donaldson and ex-VG247 contributor Joe Anderson were chatting to him about the work he'd done on The Final Hours features with Portal 2 and Metal Gear Solid 2.

Don't let the awards fool you: Keighley is certainly worth his weight as a journalist. He can write some astonishing stuff, as you've probably seen with the Final Hours of Portal 2, can be hard-pressing in interviews - as you'll see in this interview with Reggie Fils-Aime of Nintendo at E3 about Wii U - and he is, obviously, a well known face in PR circles.

Yet, for all his worth, Keighley organises an event that fails at its most basic level.

We need mainstream ceremonies that take games seriously. Do you see teabagging at the Golden Globes?

For every step Sunday night took forward - Miyamoto, Blizzard, some of the unveils - the VGAs took 20 back. We'll still be getting up in the middle of the night for the announcements next year - every games news journalist will - but there needs to be change. A re-run of this year's show would be less than welcome.