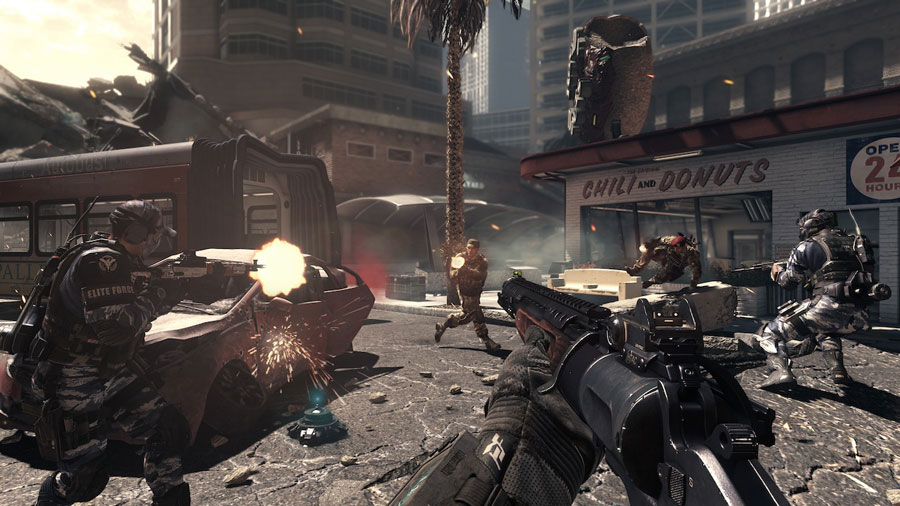 You begin the mission with a cut scene. It was 12 years ago that the Federation's military threatened South America. Their leader, General Almagro, demanded all U.S. citizens imprisoned or executed. Rorke convinced Washington to send the Ghosts to solve the problem. An invasion force, led by Rorke, was sent to destroy the Federation and eliminate Almagro. He became obsessed with it, talking of the man like he was a bounty. It was clear, Rorke would stop at nothing to claim it.

The mission begins 12 years earlier. You're playing as Elias Walker who is also Hesh and Logan's father. You're in a squad with Merrick, Ajax and Rorke. An interesting combination since Rorke killed Ajax in a previous mission. As soon as you're given control you're in the fight. Follow the tank and use it for cover. Head into the parking garage and wait for the green light to start the engagement. Climb on top of the missile truck and melee the soldier before you drop a grenade inside. There's plenty of cover so keep pushing forward until you're knocked the ground by a scripted event. Once you're back to your feet follow you squad.

Merrick expresses his displeasure with the mission. Rorke insists they push on, they're Ghosts. Head outside and take down the three Federation soldiers. This will stir up more resistance so shoot to kill until the roof falls out from underneath your feet. Just enjoy the ride until Rorke gives you a hand out of the rushing water. Follow him and crouch under the water when he tells you. After he takes the first enemy soldier down crawl under the debris to reach the next two. Take your man down and then watch as Rorke brutally eliminates his.

Follow Rorke and take down the various pockets of resistance on your way to meet up with Merrick. Obviously you don't have Riley but you can make use of your grenades. When you reach Merrick he tells you that Almagro is still in the city. With the benefit of a full squad keep pushing forward and punishing the Federation troops.

Move through the building and jump aboard the fleeing chopper. Take out the first guy before Almagro drops you with a punch. As he prepares to execute you, Rorke tackles him to save your life. Shoot Almagro and brace yourself for impact. This event is largely scripted. Grab the wire to stop from falling and then grab Rorke's hand. As much as you want to be the hero and return the favor he just did you, if you don't let go you die. Let go of Rorke's hand and watch as he plummets to the water to end the mission.