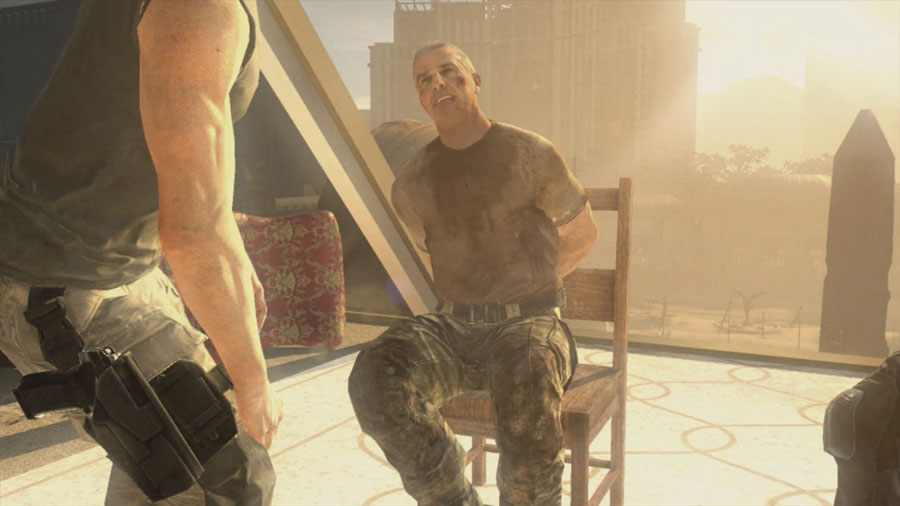 The cut scene has Hesh marveling at how the Ghosts treated their fallen comrade, Ajax. The intelligence they gathered from the stadium indicates that Rorke is hunting Ghosts. For now though, they must get back to For Santa Monica to defend it and find their father.

When you land head to the front line and take control of the LMG. Just start sending lead down range here. As soon as you're warned of incoming artillery take cover. You'll be engaged by an enemy attack chopper, just hit the deck to avoid its powerful guns. When the A10 comes online take control of it and knock a couple choppers out of the air. It's a strafe run so you don't have much time. Do what you can.

Soon after you'll fall to the beach. This is just a straightforward battle so use all the skills you've learned so far. Throw grenades, use cover and thin the enemy numbers as you push forward. You don't have the dog attack option available as Riley is being cared for by another squad at the moment. As you move you'll occasionally be given control of the A10. Be mindful of your own position and focus on any enemy armor. If there's no armor, go for large clusters of Federation troops. As their numbers start to thin, follow Hesh and meet up with Riley.

When your two man, one dog team is reunited you'll encounter some enemy troops roping in from a Federation chopper. Don't waste the bullets, just put a couple grenades at the base of the chopper to take them out. Pick up any stragglers with your primary weapon. Go with Hesh under the garage door and look for your father.

Hesh will tell you to go up stairs. As you may have guessed, it's not all clear. As soon as you reach the top you're jumped by a Federation soldier. This is a partially scripted event so follow the on screen prompts to defend yourself. No matter what you do you're going to be stabbed. Hesh arrives to save you and comments that it looks worse than it is.

When it looks like all is lost, a Ghost comes through the ceiling and saves you. You come to in the chopper, where Hesh is telling a Ghost you have to go back and look for your father. You're told he isn't there anymore. The Ghost then removes his mask to reveal that he is your father. All of these missions have been tests, and you've passed. You are now part of the Ghosts. As the mission ends the group considers their options to deal with Rorke, as it turns out he used to be a Ghost as well.