Complete guide to the game's third mission, No Man's Land. 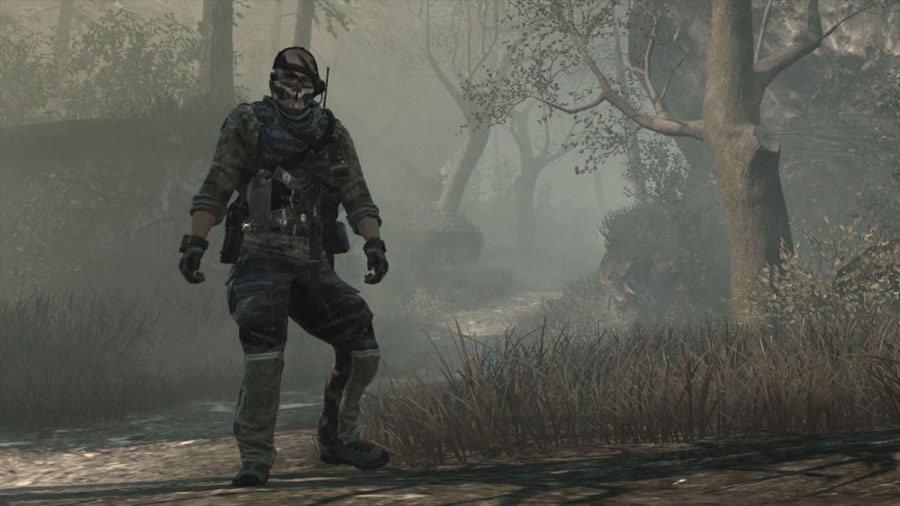 The opening cut scene explains that No Man's Land is an area between Los Angeles and San Diego that is destroyed. Not many people ever go into that area because it's simply too dangerous. Hesh guesses that this might be a test from your father, but either way it has to be important.

When you gain control you get a brief chance to attack a patrol with Riley. As you switch back to Logan take down any of the stragglers. Just follow Hesh and Riley into the remains of your old home and beyond. When Riley spots trouble take control of him and follow the instructions from Hesh. Take out the first member of the patrol and then bark to get the attention of the second. Once he's down head into the house. Hesh will take out the sniper on the balcony and then it's up to you to finish off the two remaining soldiers.

Do as you're told and stack up. Riley will jump through the window and herd the soldiers outside. This is a slow motion event much like the breaching in past Call of Duty games. Just shoot all the soldiers as they run out the door. You'll run into some opposition on the other side of the house. Move cover to cover and take them down as you push forward. Fight your way left around the wreckage and keep your grenades in mind for any groups of enemies who are well dug in.

Follow Hesh through the building and across the bridge. You'll face a few Federation troops here but nothing special. Take them down and push forward into the large tunnel. Take cover on the right side and let the vehicles pass. When Hesh tells you to take the straggler on the right make sure to put him down with a headshot. If you're spotted you fail the mission and have to restart from the last check point. Don't engage the soldiers on the left, Head to the right and take control of Riley. Move slow, stay in the grass and head towards the objective indicated on your map. Enter the small pipe and take the soldier down from behind. Go through the abandoned bus and keep moving towards your objective. You will have to attack several soldiers along the way but this should be fairly straight forward at this point. Just sneak up behind them and let Riley do all the work.

When you reach your objective you get you first look at the main antagonist. It appears as if he's going to execute a Ghost but he stops, letting him know it won't be that easy. He then orders his men to head to Firebase Charlie and informs them that Operation Homecoming will proceed as scheduled.

Head to the rally point indicated on screen where you'll take control of Logan again. Tail Hesh and Riley until you're attacked by a pack of wolves. This is a largely scripted event but does take some input from you. When the wolf attacks you fight him off until Riley saves you. Grab your pistol and return the favor. When you run out of ammunition and it looks like you're done for, Merrick and Keegan arrive on scene and save the day. Check out their cool masks.

Follow Merrick and Keegan through the gate and engage the patrol when instructed. This is a decent sized engagement but if you stick to cover you can push through fairly easily. Your squad is capable of doing some damage of their own so pick your shots. As you move forward, try not to sprint, otherwise you'll find yourself getting surprised by spawning enemies. When you get the all clear run with Keegan to the over watch point and the end of the mission.