Killavolt is arguably one of the most challenging bosses in Borderlands 3, so here are a few tips on how to take him down.

If you haven't started this side quest for Moxxi yet, consider this your only spoiler warning.

Moxxi has tasked you with killing her former love interest, but there are a few steps you need to complete before the big fight. He electrifies the floor which makes him tough to beat, but it's not impossible.

Unfortunately, this quest has a fairly moderate chance of bugging out. Players have reported the tokens you need to collect from certain enemies are falling through the floor, delaying progress.

You can try restarting the game, or speaking with Moxxi in the bar in Lectra City, then going to the entrance of Lectra City to speak to her again, then speak with her back at the bar as it might skip to the next step for you.

You can find the bar at the location marked below: 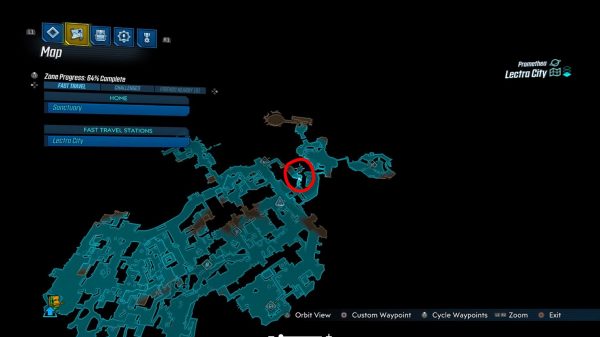 If it doesn't work you might need to wait for a patch to rectify the issue. With that in mind, let's take a look at how to defeat Killavolt.

It would be a good idea to be at least level 16 or so before attempting to fight Killavolt, but I'm not your mum, so do what you want.

To begin the quest, speak with Moxxi in Lectra City or Sanctuary. She'll tell you that you need to enter a Battle Royale of sorts and defeat three enemies to collect tokens, as well as three batteries.

You need to collect:

After that, give the batteries to Moxxi who'll give you a booby-trapped token. After that, give Killavolt Trudy's token, then Jenny and Lena's tokens, and then Moxxi's token to begin the fight.

Killavolt has a big ol' shield and will almost continuously fire at you, which isn't too big of a deal. What is a problem is the way he electrifies almost all of the floor. The tiles will glow yellow to show that they will soon be electrified and afterwards a shockwave will ripple through the arena. When his arms go up, that's your cue to watch out for electricity.

Later in the fight, blue tiles will be the first sections to become safe, so prepare for a lot of hopping around, though there will come a time where every tile is electrified and you'll just need to be prepared to jump.

The electricity will travel either in a straight line or as a circle travelling outwards from his location. You can try hopping onto ammo boxes to stay off the floor and timing your jumps to avoid the shockwave. You'll be able to find health in the around the arena but we recommend saving it for later on in the fight.

You can shoot him in the back for maximum damage, or in the dick for some real critical damage, though try not to get too close as he'll boot you across the floor. You can also focus on him rather than fighting the adds at the start of the fight.

Afterwards, pick up his Charge Pack for Moxxi and place it in the marked area, then have a chat with her to get your rewards.