Bethesda's plan is to allow all Elder Scrolls: Legends fans can play together, no matter what platform they're playing on.

Cross-play is a major topic in the games industry right now, helped in no small part by Fortnite and the fact that its PS4 version isn't compatible with other platforms. Now Bethesda is weighing in on the topic, claiming that Elder Scrolls: Legends won't be on platforms where cross-play isn't supported.

"[The Elder Scrolls Legends] is a strategy card game that encompasses both single and multiplayer," Bethesda's Pete Hines told Game Informer. "It is both cross-platform play and cross-platform progress ... It is our intention in order for the game to come out, it has to be those things on any system.

"We cannot have a game that works one way across everywhere else except for on this one thing. The way the game works right now on Apple, Google, Steam, and Bethesda.net, it doesn't matter where you buy your stuff, if you play it on another platform that stuff is there. It doesn't matter what platform you play on, you play against everyone else who is playing at that moment. There's no 'Oh, it's easier to control, or it has a better framerate on this system.' It's a strategy card game. It doesn't matter." 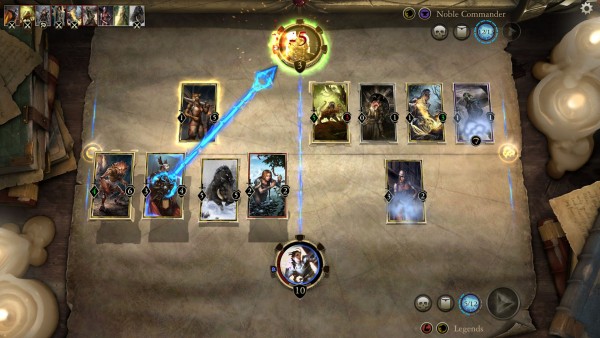 Hines went a step further to state that Elder Scrolls: Legends won't be on any system that doesn't support cross-play. While Hines didn't name Sony's PlayStation 4, that is certainly the elephant in the room.

"We continue to talk to all of our platform partners," Hines continued, "But those [terms] are essentially non-negotiable. We can't be talking about one version of Legends, where you take your progress with you, and another version where you stay within that ecosystem or its walled off from everything else. That is counter to what the game has been about."

Cross-play support is already a major feature for CCG's like Hearthstone, so it's no surprise Bethesda is pushing for it in Elder Scrolls. It's pretty likely that Sony will make an exception for Bethesda here. That being said, whether it will allow cross-play for action games like Fortnite remains to be seen.