Warner Bros. has unveiled a schmick limited edition of Batman Arkham City, available only through EB Games stores in Australia and New Zealand.

The Limited Steelbook Edition comes with a special case, the Batman Under the Red Hood Animated Movie on BluRay or DVD, and two pieces of DLC - the Joker Carnival challenge map and 1970’s Batsuit skin.

Warner Bros. sent along a picture of the swag, but apparently the case shown isn't the fancy-pants one it will actually come with. There's a mock-up you can check out over on EB Games, but again, we'll have to wait to see the real thing.

Although apparently only available in limited quantities, this seems to be EB Games' standard retail offering, and goes for AU $99.95 on consoles and AU $89.95 on PC: no word on New Zealand pricing. There's also a Collector's Edition available which looks similar to international offerings.

Batman: Arkham City release in mid-October on major platforms with a Wii U version to follow. 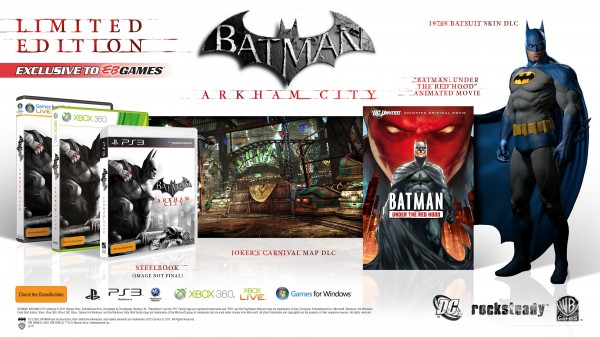