This 3D platformer is also on PS4, but it looks and feels lovely on the shiny new PS5.

I didn’t know I wanted a 3D LittleBigPlanet, but now it’s here in the form of Sackboy: A Big Adventure, I’m very glad it exists. Stripped of all the franchise’s creation tools, this is a pure family-friendly romp through picturesque environments, accompanied by plenty of head-bopping tunes, and some cute-as-a-button costumes. Alongside Astro’s Playroom, Sackboy: A Big Adventure brings some whimsy to the PS5 launch.

As ever in Sackboy games, there’s an evil (Vex, voiced brilliantly by Richard E Grant) trying to do bad things to the lovely people of Craftworld and you must stop this by navigating through five planets, each home to numerous levels. Sumo Digital’s game is old school in this regard, going for a classic level-map overworld, rather than large free-roaming areas as seen in Nintendo’s latest spin on the genre, Mario Odyssey.

If you come to A Big Adventure straight off spending time with something like Crash 4, a game that appears friendly but is at times devilishly tricky, you might find things pretty easy going. Each level has multiple checkpoints and you can even carry on boss fights after death without losing progress as long as you have some lives left. Given that Crash 4’s hard edge felt a little too sharp at points, I’m all for Sackboy being more welcoming – it’s a game designed to be played by up to four people and is perfect for kids.

There’s a lot to find in each world, which is really where the challenge lies. Unless you are actively looking in every corner for secret areas of levels, you’ll finish the game with plenty still to discover, and likely plenty of brilliant outfits to unlock. As is tradition in LBP games, some of these costumes come in parts, found in orbs you’ll find on your adventure, but others can be bought for bells via Zom Zom’s outfit store. A lot of these outfits look incredible (I’m a big fan of the caterpillar costume that sees Sackboy trail part of the body behind him), and are well worth the extra time to unlock. 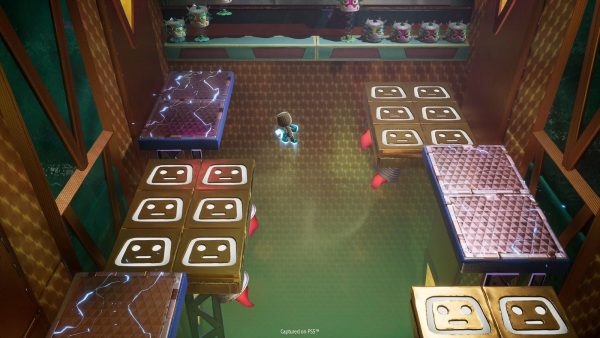 While not the most challenging platformer, some sections take more skill.

Platforming in Sackboy feels great and as should be the way in games like this, can never be blamed for failure (good news, considering there are multiple time-trial events to take part in), but the combat, especially when you’re not using a weapon of some sort, isn’t quite so slick. I got used to Sackboy’s melees but the timing just feels ever so slightly off. This isn’t Devil May Cry, so it doesn’t need to be as spot-on, but it did bug me a bit at first, and might bug you too.

The real joy in Sackboy: A Big Adventure comes from the glorious art design and music. A handcrafted feel is once again present, and there’s an almost impossibly cute feel to everything, from the enemies to the platforms themselves. The worlds are so colorful and full of movement, and sometimes you play along to pitch-perfect mixes of popular tracks that will surely raise a smile on everyone’s faces. Variety in gameplay ramps up as you progress past an admittedly sedate opening, with the level design and available tools becoming more interesting alongside it. Sackboy: A Big Adventure is a grower. 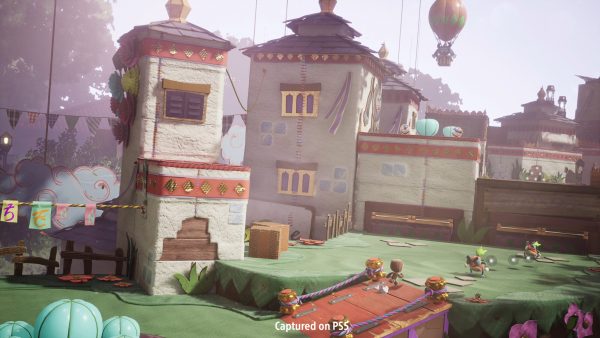 The levels look lovely in this PS5 platformer.

One downside to the game as it stands is the lack of online co-op, which is coming via a free update before the end of the year. I haven’t been able to test out couch co-op, but the game supports four players and includes multiple levels designed exclusively around co-op play should you have additional controllers and enough family members. If I’m being really picky, I’d have liked a bit more DualSense support, too. What’s here is far from bad, plenty of tactile responses but it’s not on the level of Astro’s Playroom.

That early note about a lack of creation tools is worth lingering on for a moment. As much as I enjoyed a number of user-created levels in the old LittleBigPlanet games, I can’t say that I was ever invested in that community. If you were and wanted 3D level creation, you won’t find it here.

Sackboy: A Big Adventure isn’t the most attention-grabbing PS5 launch title. It’s fair to say it’s been completely overshadowed by Demon’s Souls and Spider-Man: Miles Morales, but it offers a wonderfully crafted alternative to what are more mature titles. Sony is on a roll with the PS5, with Sackboy: A Big Adventure being yet another title PS5 buyers should seriously consider adding to their collection.

Version tested: PS5 (Also available on PS4). A copy of the game was provided by the publisher for the purposes of this Sackboy: A Big Adventure review.