The next-gen update to No Man’s Sky will bring a graphically enhanced and smoother experience and all enhancements are also available to PC players.

You can expect lusher, denser alien environments with planetary terrain are populated with thicker grasses, flowers, fungi, and rocks. These will be rendered with higher resolution textures and more detailed geometry. You can look over the differences in the slider images posted on the official website.

Base building on next-generation consoles in No Man’s Sky will allow you to construct larger and more complex builds. And for the first time, console players on next-generation hardware will also be able to play with up to 32 players.

If you own a 4K compatible TV, you can experience ultra-high resolutions with “smoother performance” and play in 60fps at 4K resolutions. Xbox Series S owners can customize the game by choosing between high-quality native resolution at 30fps or high performance at 60fps modes.

On all next-generation hardware, warping will be faster up to ten times that of current-gen consoles. Load times will also increase.

You will also be able to transition your No Man’s Sky game to next-gen. Xbox Series owners can automatically update their previous game to the new console, while PS4 players can upload their save data in-game for download on PS5.

All iterations of the universe are now united, which means PlayStation 5 and Xbox Series X/S players can explore alongside others on all other platforms.

Players on PS5 will experience the console’s new sensory features in No Man’s Sky. This includes haptic feedback, 3D audio, and PSVR owners will be able to continue to play the game on PS5 thanks to backward compatibility.

You can look over the patch notes for the next-gen update below. The last update to the game, Origins, was released in September. 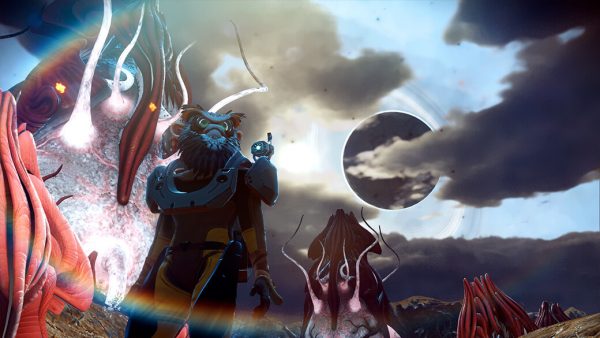