Did you miss out on a Last of Us Part 2 Collector’s Edition when they were first announced? Good news! Amazon has a few copies back in stock.

Finding one after the initial drop was about as rare an occurrence as finding a fully functioning firearm in the game’s post-apocalyptic setting. However, just a month from release, The Last of Us Part 2 Collector’s Edition is available again at Amazon for $169.99.

This release includes a copy of the game, 48-page mini art book, steelbook case, a 12″ Ellie statue, a lithograph art print with thank you letter, a replica of Ellie’s bracelet, set of six enamel pins and a set of five stickers. You also get some digital goodies too. There’s a PS4 dynamic theme, a set of six PSN avatars, a digital soundtrack and a digital version of the mini art book. It’s quite a haul! 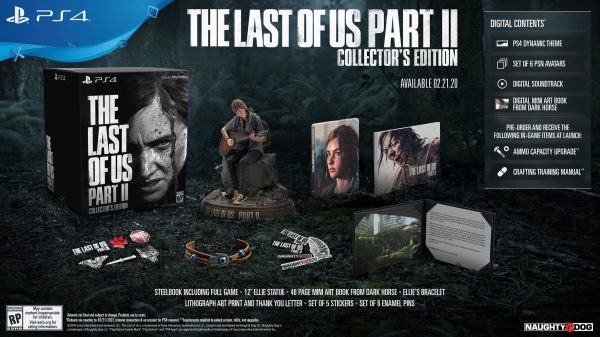 If you’re not willing to fork over all that cash, but still want something extra, the Last of Us Part 2 Special Edition is still available for $79.99. This version just comes with the art book and steelbook case. But you do get all the digital stuff as well!

The Collector’s Edition restock comes just days after the announcement of a limited edition The Last of Us Part 2 PS4 Pro bundle. For $399.99, you get a 1TB PS4 Pro decorated with Ellie’s fern tattoo design, a limited edition controller and a copy of the game.

Fortunately, the controller can be bought separately for $64.99 at GameStop. Obviously, not everyone is keen to buy a new console with the PS5 and Xbox Series X on the horizon. Sony also revealed a The Last of Us Part 2 Limited Edition PS4 Gold Wireless Headset. That’s up for $99.99 at GameStop, too. You can see them all in the trailer below.

After a number of delays, The Last of Us Part 2 is due for release on 19th June.

To ensure you’re always the first to hear about any other cool collector’s editions or game deals first, you can always give Jelly Deals a visit. Right now, we’re bringing you the best price for The Last of Us Part 2 if you’re still yet to grab your copy. You can also find our guide to upgrading your console storage with a PS4 external hard drive or where you can get a cheap PS Plus deal.