If you’re missing Alan Wake, Control might have just the thing for you in a series of easter eggs.

Before I go on, you should know that the following contains minor spoilers for the world of Control. Don’t read any further if that bothers you. 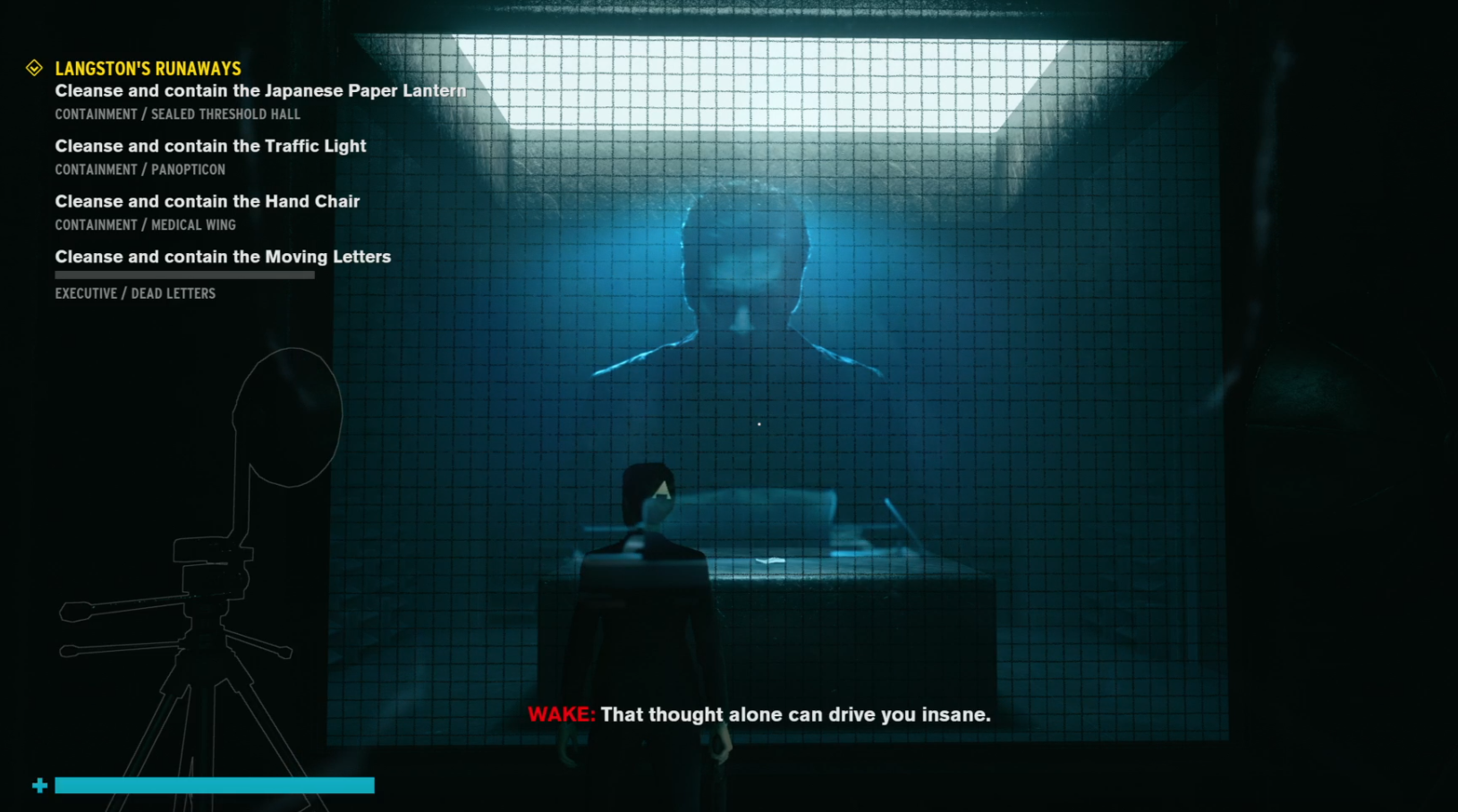 Control features a series of Alan Wake easter eggs that suggest Mr. Wake exists in the same world – a world where the Federal Bureau of Control is attempting to uncover the secrets behind Altered Items, everyday objects touched by some power beyond the veil.

Scattered throughout the game are a handful of files and one video clip that show Control’s FBC has been investigating the paranatural happenings in Bright Falls.

Here are the contents of the files: 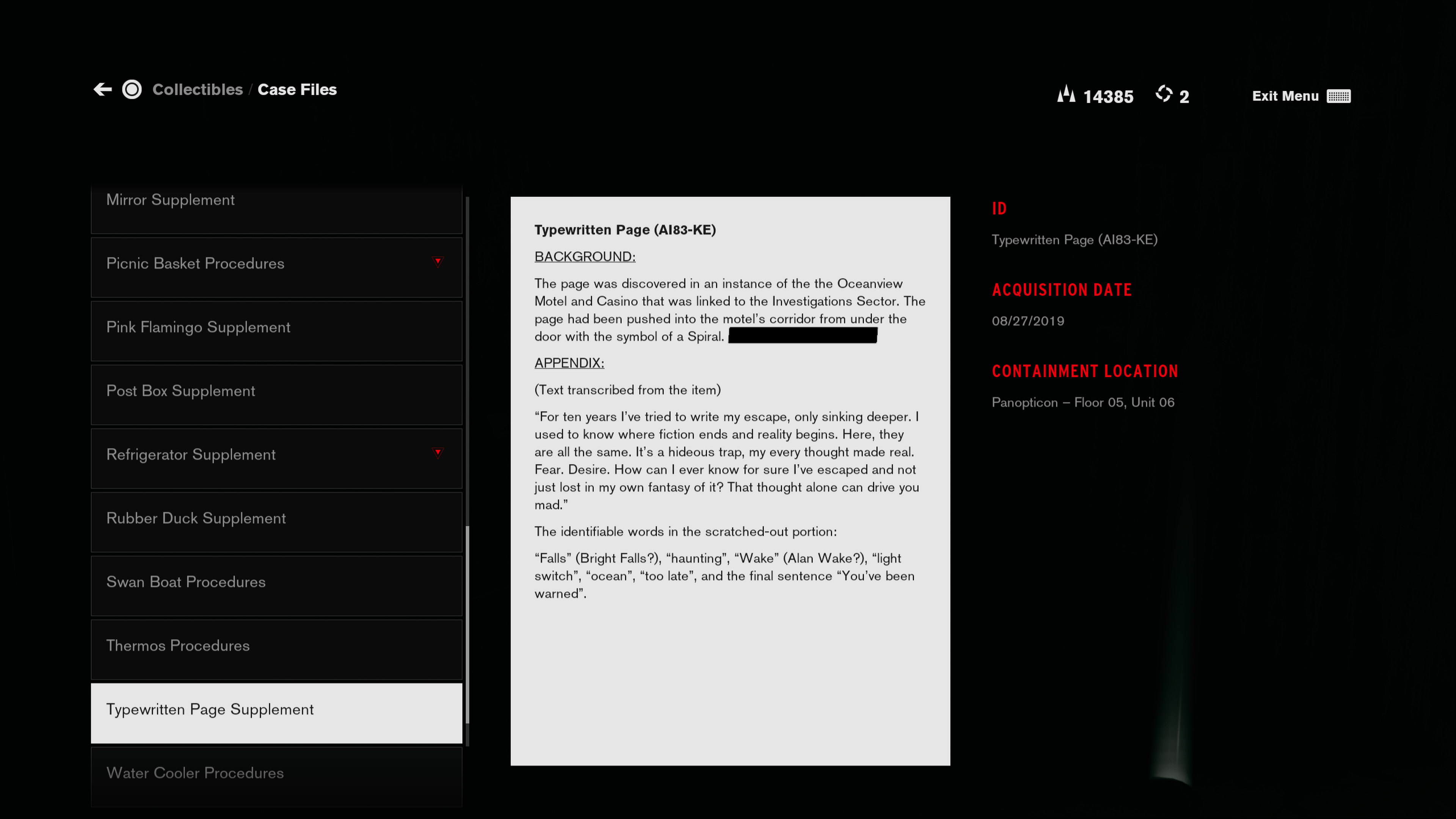 A standard letter-size typewritten page with minor water damage. The page is full of text, but apart from the top seven lines, all the rest has been violently scratched out. Only a few individual words and phrases can be made out.

The page emits a dim glow in the dark. When the text is read, there is a feeling of dislocation, as if witnessing the page being written as you read it and as if reality around you was being [REDACTED] to match the words on the page. This feeling is made stronger if the text is [REDACTED].

Forensic and linguistic analysis confirm that the text has been written by Alan Wake with the same typewriter as the earlier materials discovered in Bright Falls in 2010 (see Bright Falls AWE case file for information).

The page was discovered in an instance of the Oceanview Motel and Casino that was linked to the Investigations Sector. The page had been pushed into the motel’s corridor from under the door with the symbol of a Spiral. [REDACTED]

“For ten years I’ve tried to write my escape, only sinking deeper. I used to know where fiction ends and reality begins. Here, they are all the same. It’s a hideous trap, my every move made real. Fear. Desire. How can I ever know for sure I’ve escaped and not just lost in my own fantasy of it? That thought alone can drive you mad.”

The identifiable words in the scratched out portion:

To find this page, head to the Panopticon and up to Altered Items, Floor 4. Go across the walkway and float onto the lit up platform hanging at an angle. From there, float up to the walkway above. From that walkway, you can float across to one of the side rooms where you will find a new note on Floor 5, Unit 6.

Here you will also find a short video where Alan Wake recites some of the page to you. 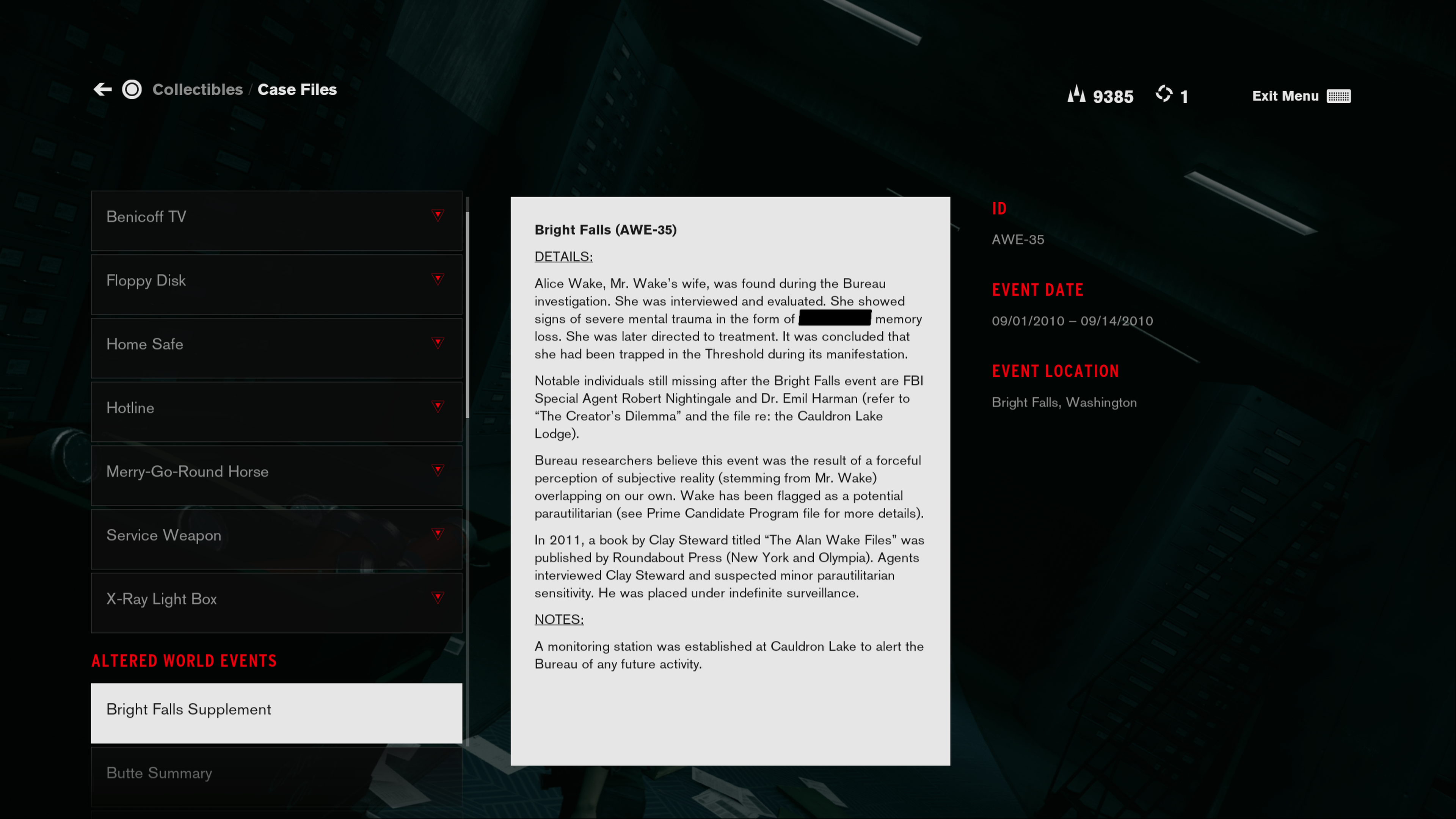 Alice Wake, Mr. Wake’s wife, was found during the Bureau investigation. She was interviewed and evaluated. She showed signs of severe mental trauma in the form of [REDACTED] memory loss. She was later directed to treatment. It was concluded that she had been trapped in the Threshold during its manifestation.

Notable individuals still missing after the Bright Falls event are FBI Special Agent Robert Nightingale and Dr. Emil Harman (refer to “The Creator’s Dilemma” and the file re: the Cauldron Lake Lodge).

Bureau researchers believe this event was the result of a forceful perception of subjective reality (stemming from Mr. Wake) overlapping on our own. Wake has been flagged as a potential parautilitarian (see Prime Candidate Program file for more details).

In 2011, a book by Clay Steward titled “The Alan Wake Files” was published by Roundabout Press (New York and Olympia). Agents interviewed Clay Steward and suspected minor parautilitarian sensitivity. He was placed under indefinite surveillance.

A monitoring station was established at Cauldron Lake to alert the Bureau of any future activity.

Looking to unlock more secrets of Control? Here’s how to enter Black Rock Processing, how to solve the punch card and mirror puzzles, and how to beat the bosses Former, the Anchor, Essej, and Mold-1.