The Chuseok, and Mid-Autumn festivals have kicked off their first event in PUBG. This first one is live until September 25, and every following event will also last for a week.

There are four sets of skins for you to get, one for each event. The requirements are simple: Place in the top 15 in five matches during each week to earn its respective skin. You’ll also need to claim the skins through the menu after fulfilling the requirements, but you can only do this while the event is active.

If you do the work but neglect to claim the items, they’re gone forever. See below for the full event schedule. 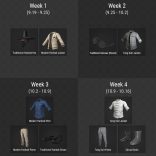