What’s that saying about opinions and assholes?

There’s a vocal community of The Witcher fans seemingly disturbed that the upcoming Netflix TV series is being written and directed by a team including female writers and people of colour, and that fact will somehow make their work unfaithful to the original story and lore of the books on which its based.

But show writer and runner Lauren Hissrich isn’t having any of those entitled bullshit opinions.

As day one began of the writing process, opinion-havers took to Twitter to complain directly to Hissrich about the team. But she was quick to shoot them down, pointing out that diversity isn’t an issue when creative writing. 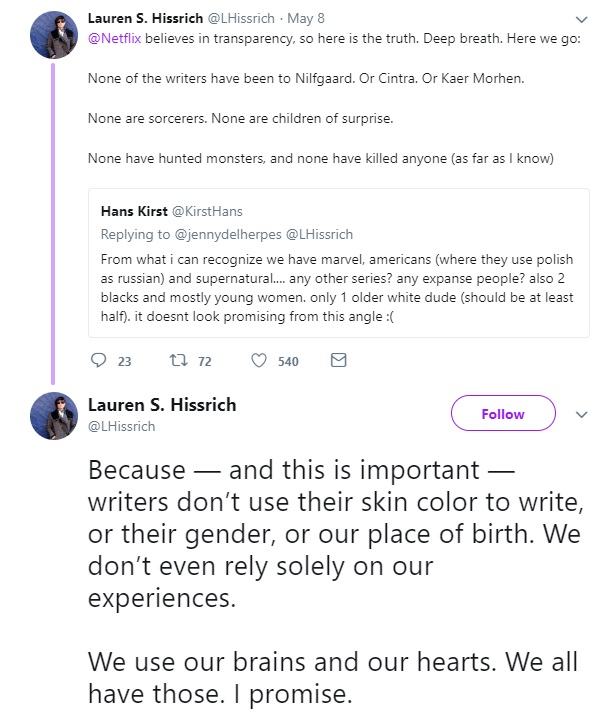 When another complained about two writers in particular, who between them have experience on hits such as Daredevil, The Americans, Jessica Jones and The Tick, Hissrich went all in:

“Have these complainers read these writers’ scripts? Have they sat with them and asked about their history with and relationship with the material? Or their favourite short stories, or how they connect with a character? Do they, in any way, know these writers at all?” she responded.

“Because – and I’m not directing this at you, but since you’re the one who brought this up – if these complainers haven’t? Then they know jack shit about how television is made, and aren’t worthy of an opinion about writers they’ve never met.”

You can read the full exchange captured in the tweets below.

Everybody, @LHissrich very politely accepting absolutely none, zero, nada of this bro’s basic-ass bullshit during her great day is the best thing that’s happened on the internet in recent memory. What a legend. ❤️ pic.twitter.com/XFIMjBPcaK

Hissrich has previously revealed a list of potential characters for The Witcher TV show, including Ciri, Rigis and Roach, alongside someone called Geralt.

Turning the conversation more positive – and exciting for those looking forward to the show – Hissrich also went on to discuss the writing process for The Witcher, which will so far consist of eight episodes for series one, airing sometime around 2020.

First things first, I welcome the writers. I explain that we're more than a team. We're a family. We're the foundation for hundreds of people who will make this tv show, and we're not only gonna be great storytellers, we're gonna be fucking great human beings along the way.

Yes, the writers have read the books, but these documents focus our discussions on day 1. We move fast, and I don't bend on the schedule. There are due dates, and we must respect them so that everyone else can do their jobs when we're done doing ours. (TV is teamwork, period).

We break down characters first: who they are, what they want, who they'll do it with. Organically, those emotional moments collide with plot. Note: some writers are better at plot machinations. Some are better at emotional arcs. Some do action. Some do sex. It takes all types.

We decide on something. Then we change it an hour later because we find something else even better that highlights this character's journey, or this super cool monster that's just PERFECT for this episode. We do this all as a room. But TWIST: we write episodes as individuals.

And that, friends, is how we write.

So don’t worry. There will be action. There will be sex. Roach might get stuck on a house, but whatever, Hissrich and her team seem to be confidently in control and no amount of moaning from a community, no matter how small or loud, is going to make a damn bit of difference.