Fortnite, the game you’ve been playing on your £800 gaming PC or £400 console, is now playable on your phone. Admittedly the devices that can run it are around the same price, but the fact you can play one of the most popular PC games in the world right now on your mobile is impressive.

This is the full Fortnite experience – well, the Battle Royale part of it – in your damn pocket. It’s the same map, ruleset, weapons, the same building mechanics, the same player count – there is parity everywhere except for in the controls and on the technical side.

Playing on an iPhone X, I notice slight lag and a fair bit of texture pop-in. Others have reported the pop-in to be considerably worse on older devices, which is perhaps to be expected. Additionally, the textures are nowhere near the fidelity of the PC version, but they are by no means bad – everything looks sharp enough to play effectively, although spotting movement at long distances is tough on the small screen.

The big stumbling block is the controls, which are actually better than I expected. A virtual analog stick is used for moving around. Moving the camera is done by sliding one of your fingers or thumbs across the right-hand side of the screen, which is as intuitive as you would expect in the era of touchscreens. Whereas other action games on mobile use buttons to control the camera, Fortnite allows you to find the most comfortable position for your hands.

Shooting is done by simply tapping the screen, reloading is either automatic or done by tapping your ammo counter, while switching item and weapon slots is as easy as tapping the item you want. There aren’t any fancy button combos to use, and the virtual buttons – there’s one for jumping, crouching, opening the inventory, and switching to build mode – are well-sized.

One area that does take a lot of getting used to, even after a good 20 or so rounds, is learning that long distance fights are best avoided. On PC I will happily engage someone hundreds of meters away if I have a good sightline, but the much smaller screen and less accurate control method makes long distance fights tough. When just a couple of pixels can make the difference, the accuracy of a mouse and a large screen will usually win, which will be an issue when playing cross-platform. 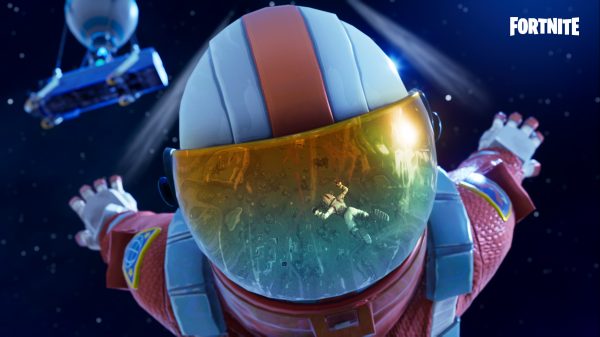 Building is also a little more difficult. On PC you can easily build super structures within seconds, but on mobile it takes a little more time to make sure everything is perfectly placed. It is still a lot simpler than you would expect, with a quick button press taking you to the build mode. From there, it’s basically the same as PC and console, but there were more than a few times where I misplaced panels due to the touch controls, wasting precious resources.

The biggest change for the mobile version is the addition of visual cues for key audio sounds. Because no one wants to be that person sitting on a train with full game audio blasting out, Epic has added visual indicators for footsteps, shots, and treasure chests, all of which show the direction they are coming from. This makes it significantly easier to track where someone else is within your building, and also means you won’t have to spend ages searching for where shots are coming from. It’s a massive help to mobile players – once you learn how to use it well.

Fortnite on iOS is just Fortnite with a little less visual clarity and a slightly different way of playing, then. There are a few minor gripes, such as iOS-only matches in Europe rarely going above 85 players, a fair bit of network lag on slower connections, and very small text size on the menus, but those don’t impact the game too much.

There is no doubt that the PC and console versions are still the best way to play, but if you are out and about and fancy that battle royale fix, there’s no better option than this. That feeling of satisfaction when you win, or at least have a solid round with a decent amount of kills? It’s still there, and you can now experience that rush on a bus.