Yu Suzuki has seen it all, game development wise – but he’s never quite made a game like Shenmue 3.

Suzuki is without a doubt one of gaming’s superstar developers. I mean, just look at selections from that resume: Hang-On, After Burner, Space Harrier. Virtua Fighter. Sword of Vermillion. Daytona USA! These are classics, but his career has come to be most defined by the game of his that struggled the most – the open-ended Shenmue, a strange game that’s part Virtua Fighter, part RPG, part visual novel style detective story.

Shenmue was the most expensive game ever made at the time of its release, and though it spawned a sequel neither lit sales charts alight. The series became a cult classic, however, and that led to years of campaigning by fans for the cliffhanger ending of Shenmue 2 to be resolved. Via Kickstarter they got their chance, and in 2018 Shenmue 3 will be a reality.

I sat down with Suzuki to chat about this dream project, touching on the differences in development, serving nostalgia and Suzuki’s intention to make a Shenmue 4 and beyond. Our chat is in full below.

VG247: I want to start off by asking about the main difference between now and back when you first created Shenmue. That was one of the biggest game budgets of all time, but now you’re working in a much more constrained setting and with kickstarter money. How are you finding the difference?

Yu Suzuki: First of all, I have to think that the best way… I have to make the characters and the environments with the best of the resources I have at the time. That’s the first thing I started to think. It’s a different budget, a different time period for development, and also the players are quite different from 15 years ago now. Younger players who perhaps didn’t play 15 years ago will be joining up now.

In the previous ones, I created the game engine myself – but now I’m using the Unreal Engine. Right now the thing that’s most important and the thing I’m putting as our highest priority is creating and establishing the sense of the world of Shenmue. That’s most important.

“I think that if I were to take the same approach that I did for Shenmue 1 and 2 now, for a new game, I would fail. So we’re taking a different approach.”

I was thinking that if you play the various elements of the open world, that it’ll maybe be tied in and connected to the story. I think this is quite a different approach to Shenmue 1 and 2. I think that if I were to take the same approach that I did for Shenmue 1 and 2 now, for a new game, I would fail. So we’re taking a different approach. While if I had 300 employees underneath and 3 years to build, I could do the same thing, but… [laughs] It’s not the reality any more.

A big part of Shenmue 3 for fans is nostalgia. How do you bridge the gap between nostalgic nods and new stuff? The first two games are quite unique in that you really have an all-new cast in each game, but that isn’t so good for nostalgia…

Yeah, this time we will see a lot of new people in the game. But at the same time, you can make a phone call to the characters of Shenmue 1 and 2. When you call those older characters, all of the images come up as your flashback, your memory.

In the form of original screenshots, or new recreations of those scenes?

Movie, a movie from the original. 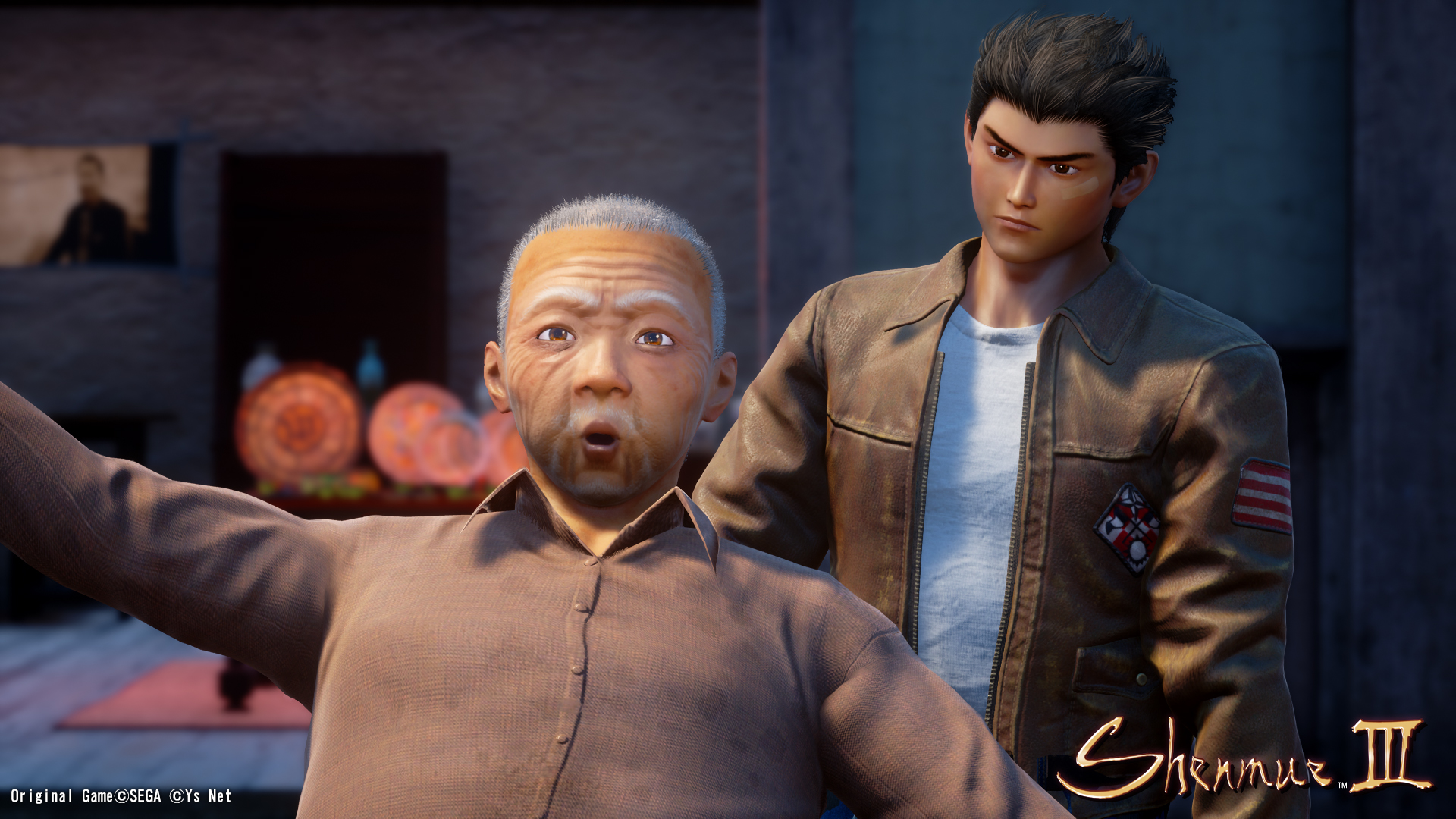 One thing that’s happened since Shenmue is the rise in popularity of open world games, and you describe this game as open world. What are you learning from those games and taking and incorporating into Shenmue 3?

Well, I can comment that I am now learning that open world games cost a lot! [laughs] That’s the lesson I’ve learned.

It is very challenging and difficult to make an open world game. Thanks to Unreal Engine – a great game engine – now it’s becoming much easier and a lot of developer can make open world games.

Although I am the originator of the open world, I think so, the later open world games have a budget probably ten times bigger…! So even though I’m the originator, it’s very difficult to compete against such huge budgeted games. Therefore I needed to bring forward new concepts into the game. I don’t know what it might be yet, but perhaps I need to work on a super-closed game rather than an open-world game… something like that.

As to the setting of the world… am I right to expect this game will be more rural than the previous games? The footage so far appears that way.

As you can see, this is sort of a city area [gestures to wall artwork of an old-looking city]. This is actually the second area of the game. As you see the buildings are relatively old, but the town is big. [Suzuki reveals some unreleased images of this area on his laptop] There are a lot of shops you can enter, and it’s quite a large space – but the buildings are very old, and so not necessarily a city in the modern sense.

The environments look fantastic, but there’s been a lot of chatter about the character models this week. What do you have to say to that? Are improvements coming?

You know, to be honest… the faces, they’ve not been properly deployed yet. This is a behind-the-scenes story, but up until a point 2 months ago the face motion has been removed. The developer changed some structure to the bones of the character model, and this caused a problem. Because of the problem, we decided to stop working on face animation for now.

[Suzuki opens his laptop and brings up an internal, unreleased development video showing facial animation tests for Ryo and Shenhua. The animations look fairly decent, and certainly avoid the dead-eyed stares seen in the recent Shenmue footage or Andromeda-style exaggeration.]

This is still the sample model, the older one, but… this is a test. We’re going to make this even better. We’re incorporating about 11 different types of face motion, and we’re working towards that. That will be improved a lot.

“I think that probably after we finish this, the next one, Shenmue 4 – it will be coming.”

So… I want to ask about the legacy of the series. Where do you see it going from here? Do you see this as… you doing a coda, or do you see it as the start of something new for Shenmue?

Suzuki: Hmmm…! I’m not sure we can continue the so-called legacy of the series. I know that… of course, there are a lot of Shenmue fans, and I’ve been hearing a lot of requests from people that no matter what the style or no matter what it is, they just want more Shenmue. I’m not sure if I can make a legacy or not, but I will say that it’ll be far better than nothing – I just want to entertain.

Back in the day you talked about chapters – about the Shenmue story being a certain number of chapters. Has that structure changed after all this time? How far along that timeline is Shenmue going to take us?

As you know, I wrote an 11-chapter story as Shenmue’s original story. This is a base of the story, obviously. If I make it, we’d need 11 games – and that’s not going to happen! Shenmue 1 was chapter 1. Shenmue 2… around 80 percent came from chapter 2. The remaining 20 percent was sliced from chapter 4, 5 and 6 – pieces of it. And in the case of chapter 3, that was actually totally removed.

You know, originally I thought… maybe with Chapter 2 and Shenmue 2 we’ll make it open world, big, and then next one is going to do a deep, deep dive into a small area – but make it very deep. That’s the concept I was thinking. Think of it as… the world through a telescope is interesting… but also a magnifying glass on a small area would be different, and fun, and most interesting.

I knew that if we made Shenmue 3, people would be mad if I didn’t make an open world [laughs]. I still have a wish where I’d like to make a very closed world game as well. My definition is not an ordinary closed world… it’d be very, very closed… but very deep.

[laughs] Maybe. I certainly have a wish to make that sort of game.

In many ways I think of Shenmue 1 that way, to be honest. It was an enormous world at the time, of course, but when you look at it by modern standards it’s actually quite small – it’s just incredibly detailed.


I guess… well, in Shenmue 3, the first area is probably a similar concept – a Shenmue 1 type. The second area is more of a Shenmue 2 type – more like a bigger open world.