Xbox's new controller for people with disabilities is some truly magical stuff.

E3 is always an incredibly eventful show, and this year was no exception. Personal favourites for me included Cyberpunk 2077, Resident Evil 2 and Super Smash Bros. Ultimate - all winners of VG247's Editors' choice awards for this year. One stand-out from the show for me is something less eye-catching than a big-budget new game, however: the recently announced Xbox Adaptive Controller.

A new bit of hardware might not be the biggest deal to me given that I can use regular controllers just fine, but for others this will be earth-shatteringly important. That's why this is so fascinating - it's a very niche device aimed at making gaming more accessible to a broader range of players, and it's the sort of action that Microsoft needs to take in order to really make the 'gaming for everybody' vision Xbox boss Phil Spencer keeps talking about a reality.

When I see the controller in person for the first time, I'm struck by how well-designed and slick it is. It's a thin, lightweight white slab that features the most basic of inputs - two large and sensitive soft-touch buttons, a d-pad and a couple of small buttons plus the traditional Xbox logo button for syncing up. Beyond that the configuration is up to the individual user thanks to a couple of USB ports and 19 individual ports, each mapped to one of the traditional Xbox One controller inputs and supported by a 3.5mm jack.

When you buy the Xbox Adaptive Controller the slab is all you get, but the 3.5mm jack is used in many devices that are built with accessibility in mind, so it will hook up to a variety of third-party input devices. Microsoft had a variety of potential input devices on display, ranging from large-size joysticks to big, easy to press buttons, footpedals or analog stick designs based on the Wii Nunchuk. The variety seems huge and the broad compatibility makes the potential essentially endless. The idea here is clear: players who use non-traditional input methods can custom-craft a control scheme that works for them.

What impressed me the most about the Adaptive Controller, and the main reason I'm writing about it, is the care that's gone into its creation that becomes obvious when you see and hold one up close and personal. Each one of those 3.5mm jack inputs has a little groove above it, for instance, to make locating an input easier for those with less fine motor control. Those two large buttons on the device itself press in with a slightly different cadence noise - just a little bit of feedback for the player.

The same sense of detail is true of the choice of power supply: the device's internal battery can be charged via DC or USB-C, with Microsoft designers explaining to me that format was chosen over traditional USB because it can be inserted either way up - again, a small change to make things easier for everyone. It's even supposed to be built in a sturdy enough fashion that you can use your feet with it - so you could stand on it if needed, or use those large programmable buttons with your feet while having other input devices up top for you to use via the ports on the back. 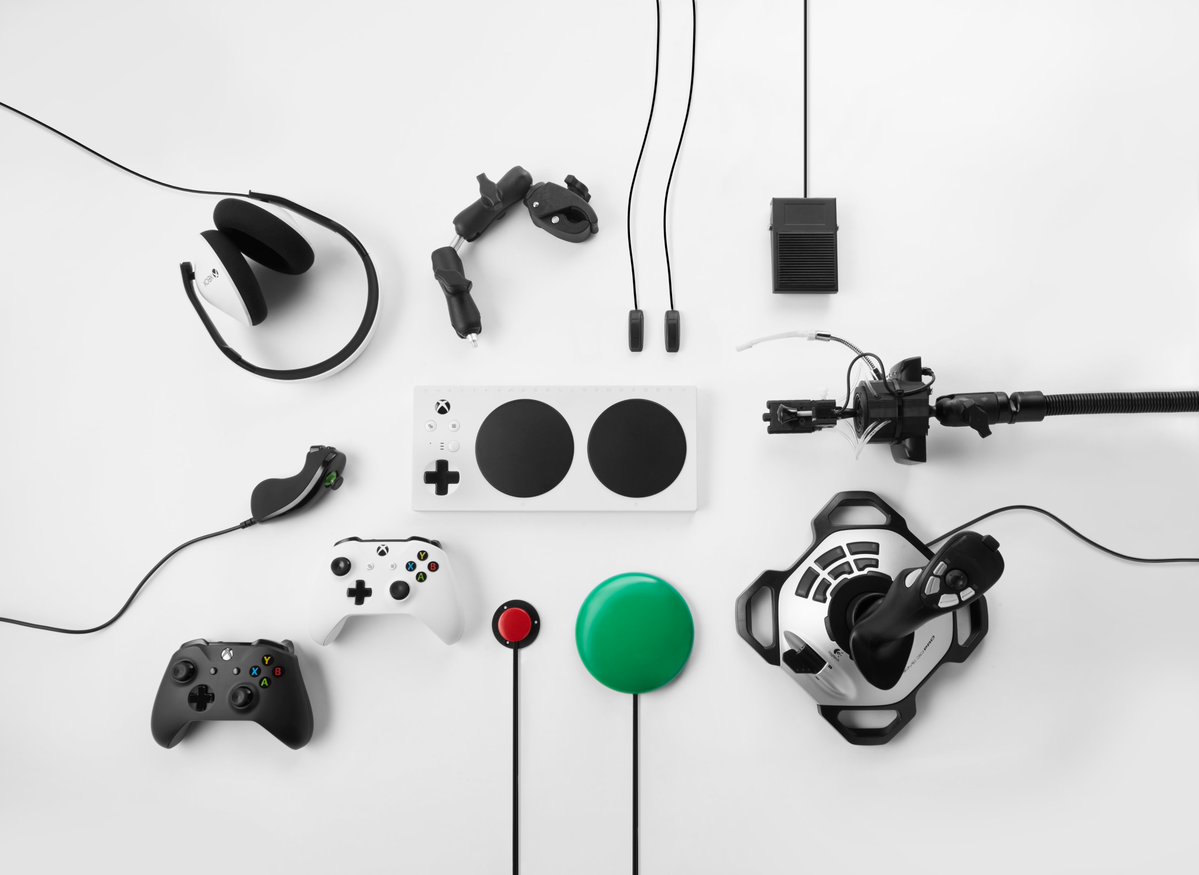 Controller mapping is a potential pitfall, but detailed software developed in tandem with the device helps players to set things up, while one of the adaptive controller's many buttons you can program in can also be used to switch between various input config profiles on the fly. It all just seems terribly well thought-out and lovingly crafted - and it honestly warms the heart to see the games industry not just make a token offering to those with disabilities but properly craft something high quality that can be pushed and tweaked to meet their needs.

All of this comes across from reading about the adaptive controller online, but seeing it in person really drives home how special it is and how lovingly crafted every detail is. They're not making this all about Xbox - it'll work on PC, but Microsoft is also keen to offer support for it on other consoles, too. They don't see this as just some exclusive - they see it as an important step for the industry as a whole.

There are some advantages to this device for other players, too: right away one can see the potential for this controller for those looking to try new things. I can already sense the incoming custom Rock Band drum kits, or input set-ups designed to allow for faster aiming or a quicker speed run or the like. As a fighting game obsessive, I could see some great custom arcade stick setups (including perhaps something legendary Street Fighter player BrolyLegs might try out) - and with those two big buttons it'd also make a pretty kick-ass Divekick controller, too.

Most important is its primary audience, however. In this, they have a product of which they can be proud - and hopefully this level of support is something Microsoft embraces and keeps up in years to come.