"Teh reel next-gen" will have to wait. E3 2012 will be a re-run of last year, with triple-A bully-boys dominating software as Nintendo steals the platform-holder show with Wii U.

E3 2012 - which runs throughout the week of June 4 - is going to be a mix of excitement and despair. You can expect a re-run of last year. This will be a show dominated by a strong triple-A software cluster and Wii U, with other aspects of the games industry largely ignored as Microsoft and Sony hold steady.

Most of the games to be shown in LA next month are already announced and are currently being forced into the hype funnel. Both Microsoft and Sony will have software surprises, but they’ll be peripheral to pressing attention on Christmas 360 and PS3 content. Aside from a few games, you already know what’s going to be shown.

And forget any notion of a 720 or PS4 reveal. We’ve said it what feels like 100 times, but please don’t kid yourself: it’s next year.

Microsoft’s core centrepiece will, of course, be Halo 4. Expect Black Ops II to feature prominently in the press conference, as will Kinect. Forza Horizon will be shown. You shouldn’t expect any earthquakes here. Yes, there’ll be US service announcements and there will definitely be at least one core surprise, but we’re still very much in this generation as far as Microsoft’s concerned. The press conference will reflect that.

Sony’s first-party effort will revolve around at least two largely unknown core products and Vita. The two titles are likely to generate a great deal of excitement. Also expect Sony to attempt to play a strong “Vita isn’t dead” card. Big core games on the small screen will be a focus for Sony this year, but, again, expect solidity rather than megatonnage. You may well be blown away by what’s on show, but it’s doubtful you’re going to be too shocked by any of the announcements.

Apart from the partnership deal between PlayStation and a leading cloud gaming service, obviously.

The star of E3 this year will be Wii U. Nintendo’s LA mission is to completely lord proceedings, and you should expect a procession of publisher commitment. We already know about the reworked controller, and we’ll most likely get final specs. Following a muddled reveal in 2011, Wii U will be shown as a complete, finished product - with a healthy core line-up - ready for release in 2012. Don’t fall off your chair when Nintendo confirms a global Christmas launch, although, as Nintendo said last month, Wii U's exact launch date and pricing for each market will come "sometime after E3" (thanks, Nathan).

The press conferences (all times PST) 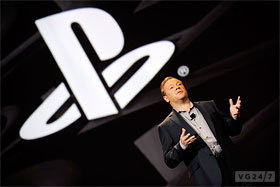 Outside of the platform-holders, the third-parties will show a similar solidity to last year. EA will have Medal of Honor, Need for Speed, Crysis 3, Star Wars and more. Expect some nice core surprises. Activision will be all about Black Ops II. Square Enix will have a good show, focusing heavily on Tomb Raider and Hitman.

Ubisoft will be one to watch. Assassin’s Creed III and Far Cry 3 are the main events, but you should be expecting a show-stopping reveal. There’s a big headline here.

THQ we know about: Darksiders is readying for ship and Metro's looking hot. There's bound to be an announcement or two.

Take-Two may will say little. Grand Theft Auto is usually left to stand alone from E3. It may appear, but really don't count on it. E3's all about Christmas retail, and it now seems certain we're not going to see GTA V until next spring at the earliest. The publisher's big show game will be Borderlands 2.

But, to reiterate, E3 will suffer from the same flaws as last year. It will be a gameshow-like event focused on the super-spend, and will all but ignore PC, indie and mobile due to its format. E3 2012 will be a steady showcase of core console gaming, with the big guns lined up in a neat row behind hardware format generals.