Alex Donaldson takes the fight to the enemy and talks to the franchise's overseer in a bumper Resistance special. 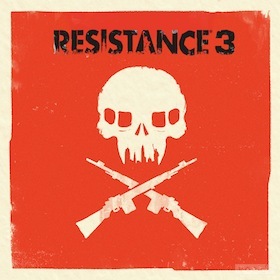 The Chimera were out in force at gamescom. After checking out both Resistance 3 for PlayStation 3 and Resistance: Burning Skies for PlayStation Vita, we spoke with Sony's Frank Simon to find out exactly what makes this franchise unique and worthy of such aggressive expansion.

“Resistance has spanned 3 platforms now – the PS3, the PSP and the Vita,” Simon, a Senior Staff Producer at SCEA who is working on both new Resistance games, reminds us after our demo.

It’s thanks to that experience that Resistance now knows where it stands within the market, and it shows in the way Sony promotes it. With more of a focus on plot, underlined by recent narrative-heavy trailers, and a marketing campaign led by provocative imagery from artist Olly Moss, the series is aiming to flesh out the storyline developed in earlier titles in a big way.

“It’s a hallmark of Resistance,” Simon says of the strong narrative focus projected by the marketing of Resistance 3.

“Resistance is totally about the story, and bringing those characters to life. It’s also about the weapons – and actually making sure that players fall in love with the weapons. I think it’s also about the Chimera as well. I think they’re such a unique enemy in that they adapt to the situation they’re in – you see the Chimera in Resistance 3 and you see new Chimera in Resistance: Burning Skies, but it all still fits within the same universe.”

The Chimera do feel unique compared to the enemies in a lot of today’s shooter franchises. In a sea of opponents that merely duck and roll and hide behind cover, they’re strangely animated, jumping from place to place to get a better vantage point, desperately scrabbling up walls to get to higher ground and exposing themselves to potential death from the player in the process – taking risks that AI-controlled enemies often don’t.

“The Chimera aren’t meant to be understood,” Simon tells us, and that makes sense – they look mental in both games, not just slavering, evil aliens throwing themselves at you but out in force, literally everywhere in the Resistance 3 demo we play. Jet boosting from one roof to another, the squad of humans is surrounded, fighting them off from all angles both on the ground and in the air.

“You can’t quite get a grasp on what’s going on, what they’re thinking,” he adds. The AI seems to be doing some interesting things to keep the player on their toes, rather than just charging indiscriminately.

Simon's second selling point for the series, the weapons come packed with distinctive alternate fire modes that always reminded me of those on offer in Rare’s classic Perfect Dark for the N64. While in the brief hands-on session fending off Chimera drop ships we only got to try out a handful of weapons, each handled very differently and had an entirely unique alternate fire with separate ammunition.

At one point I find myself completely out of regular ammunition in my two favourite guns, and resort to picking off the last few enemies with the super-powerful alternate fire. The unique weaponry is key to Resistance’s success, Simon explains.

“I think if players fall in love with the weapons they’re playing with, a lot of the time a love for the game itself follows that.”

While the eight player co-operative missions from Resistance 2 won’t be returning and story is in the spotlight, Simon explains that multiplayer development has been about refining what existed in previous games.

“The intention for multiplayer in Resistance 3 has been about trying to provide that kind of visceral combat and trying to dial the map sizes, the number of people playing, into that appropriate size,” he says.

"We want to make sure that you’re always at the edge of your seat in multiplayer."

“If you look across the Resistance games you’ll see we’ve played around with the number of players and how big the maps are, we’re trying to find that perfect combination to get you into that fast frantic action, while also having that same cat and mouse gameplay that’s prevalent in the single-player campaign as well. We want to make sure that you’re always at the edge of your seat in multiplayer.

“I’d say the biggest thing that’s different in Resistance 3 is that I think we’re trying a bit of a new formula – you’ll see there are different perks and things you’re equipping to try to give you a different load-out every time you’re playing. You’ll see new combinations of weapons – same thing – and you’ll have new ways to take advantage of those weapons in the scenarios provided for you.

"I think it’s kind of a little bit of a change – keeping that fast, frantic action up. The kill streaks are something we’ve definitely enjoyed in Resistance 3, when you get on a kill streak you really feel like you’re empowered - you get a bit greedy for them. You can see when people are on a kill streak as they start getting closer and closer to the TV. Those kinds of things, we hope, will keep people engrossed in multiplayer.”

Expected to release during the PS Vita's Western launch window.

While Resistance 3 feels similar to the two core titles which preceded it, the Vita-bound Burning Skies is where the franchise seems to be taking an interesting and different turn, with tweaks and changes such as the welcome return of regular health packs over recharging health. Once again, it’s all about that story.

“With Burning Skies we’ve tried to bring you back, more towards a civilian respective during that initial onslaught – the tipping point where the populace itself is reacting to being invaded by an alien force,” Simon explains.

That puts you into the boots of New York City Fireman Tom Riley, who literally picks up a fire axe and starts hacking away at some alien scum. It goes without saying that the dual analog sticks immensely help a game like this control well on a handheld, and the Vita's horsepower goes brings the graphics impressively close to the PS3 titles. Other interesting Vita touches begin to show themselves in the short demo as well, such as the ability to tap anywhere on the screen to lob a grenade at that spot with pinpoint accuracy.

Nihilistic have done a great job of aping the gameplay style from the console versions on the Vita, skills possibly honed some in their work on PlayStation Move Heroes, a title that saw them take gameplay styles and characters from across Sony’s IP library and bring them to Move. Resistance: Retribution took the series to a different gameplay style, but with this first traditional Resistance title from another studio Sony are perhaps showing that they’re willing to look beyond the original creators of Resistance for the future of the franchise.

“I’m actually very lucky in that I work with both teams,” Simon replies when we ask about Insomniac’s future with Resistance.

“Insomniac are just premiere developers – they’ve been working on the PS3 and with us at Sony for a long time. You can see that it shows on Resistance 3, their technology has had three games to evolve with, and they’re very interested in telling that compelling story as well.”

“We would love to work with Insomniac more in the future. I don’t think there are any thoughts about that being different.”