The apocalypse hasn't even happened yet and VG247's Dave Cook is already bored of it. Is the end of the world being flogged to ribbons or is there life after the downfall of humanity yet?

I was sitting down to write a news story about Tokyo Jungle Mobile last week and upon typing the words 'post-apocalyptic' I stopped and realised just how often that term appears in gaming today.

The apocalypse is a hot ticket right now. We've had warring comedy films This Is the End and The World's End releasing just weeks apart, along with a fuck-ton of games based on the downfall of humanity this generation. The recent success of Naughty Dog's harrowing The Last of Us shows that the subject is still of interest to many.

”If Ubisoft Massive really had the guts it'd close The Division with the end of the world anyway, just to show that sometimes, despite humanity's best intent disaster cannot be averted and by our very nature we are a self-destructive species.”

What is it about our ultimate demise that appeals to so many people? I think a large part of it is this morbid curiosity we all have where we put ourselves there, right after the bombs have fallen or aliens have slaughtered the populace and we ask ourselves that big question:

"What would I do in that situation?"

Seriously though; if the taps stopped running or the zombie horde rolled into town right now what would you do? There's a strange, almost sadistic thrill that comes with playing these scenarios out in your mind and I think this is what made the opening moments of The Last of Us both so blunt and memorable.

It's also why TellTale's first season of The Walking Dead proved so effective. It showed survivors in the middle of an unfolding cataclysm trying to delay the inevitable, hopeful in the belief that over the next hill they'd find some sort of salvation or cure to the problems at hand.

As the player you witness and try to resolve very real issues like food, water, medicine and figuring out who to trust, while the evidence begins to pile up that in reality, life can never go back to how it used to be. It's an effective human story told in a world overrun with ghouls, and it shows that post-apocalyptic settings needn't be heavy with guns to be memorable.

By contrast games like Fallout or Borderlands place you in ruined worlds long after the event and send you off into the wastes armed with many weapons and skills. They're power fantasies where the every day struggles of humankind don't really impact your levelled-up warrior, but at the end of the day there's absolutely nothing wrong with this approach either.

In fact, I really love how Fallout 3 presented the Capital Wasteland, especially the ravaged opulence of downtown D.C. and while you can see evidence of life before The Great War, it's a series that has largely focused on how humanity advances from that point, instead of looking back in regret. The same goes for Borderland's Pandora, which has been so abused by corporations that the only thing left to do is survive and rebuild.

The freshly-announced Mad Max from Avalanche Studios looks like it will fall into this category as well, with all of its applications of knees on chin and high-speed car battles. It looks perfectly fun but I think I'm growing slightly tired of this brand of action-packed apocalypse. I want the pathos, I want the human stories and I want to be part of the downfall as it unfolds.

Perhaps the most interesting cataclysmic game I've seen in some time is Tom Clancy's The Division. Sure, it might not focus on a global pandemic, but the premise of a deadly virus spread through tainted dollar bills in New York really appeals. It's still a shooter but you're working to contain the apocalypse as it starts to unfold in front of you, and to halt the spread of the disease before it causes America to collapse. That, to me sounds thrilling.

If Ubisoft Massive really had the guts it'd close The Division with the end of the world anyway, just to show that sometimes, despite humanity's best intent disaster cannot be averted and by our very nature we are a self-destructive species. I'd absolutely love to see that happen. It'd be a bit like the twist ending of Terminator 3: Rise of the Machines without the shit stuff beforehand.

Can you imagine an apocalyptic game that is basically the first half hour of The Last of Us made into a full release? If the story was written effectively it'd leave you constantly wondering if the collapse is about to be halted, but then it'd continually pull the rug out from beneath you. 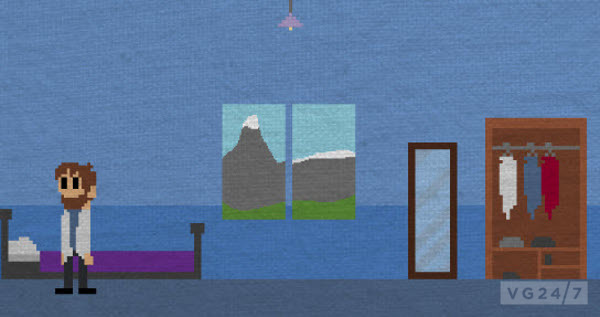 Once Chance is a perfect example of what I mean. Play it here.

Would your trusted allies turn hostile if they realised that no matter what, the end is coming? Would they eventually betray you to preserve their own well-being? Would you be forced to kill that person if they turned on you? Where would you go? How would you find food? What is your place in this new, twisted place where judicial rule and social decency no longer apply?

To me the most interesting aspect of post-apocalyptic fiction is whenever a character looks back at the days of the big crisis and recalls their struggle to adapt to the savage new world unfolding around them. It's this brutal transition that appeals to me most, but instead of looking back I'd like to play a game where I actually experience those painful moments as they happen.

The games industry has repeatedly shown that it can effectively create feelings of loss in players without resorting to hammy dialogue or thinly-veiled emotion. Look at the end of Shadow of the Colossus for one. Creating a story like this with maturity and provoking great emotional engagement in players absolutely can be done during an apocalyptic setting.

You can see an absolutely heart-breaking example of what I'm talking about in the compelling Newground flash game 'One Chance', which places you as the only person who can avert the downfall of humanity as it unfolds. I won't spoil what happens but once it's over the game blocks your IP address meaning you can't try again. It forces you to make tough, painful decisions with regularly upsetting consequences

I'd like to see studios take this approach and instil in us the pain of watching a character's luxuries and loved ones slip away as the world decays around the player. We'd watch it happen reluctantly and slowly slide into a new, brutal form of existence without any say in the matter. I genuinely believe this could form the basis for a truly memorable apocalyptic experience.