At the heart of Sumo Digital and Sega's latest kart racing effort is an interesting concept: what if coming first wasn't the ultimate goal?

In Team Sonic Racing, your aim is still to place at the top of the podium in a sense - but as a team rather than as an individual. Every race sees you as part of a team of three - and your team's overall placement at the end will be determined by the individual positions of all three racers. To encourage teamwork there's a variety of systems and mechanics built around interacting with and helping your team mates - so sometimes it's actually better to pull back off the top of the podium in order to help a team mate that's lagging behind. Just coming first yourself isn't always enough.

I'm actually quite surprised that this game didn't end up being called Sonic Heroes Racing, as the three-strong character team concept actually has a fair amount in common with the 2003 team-based Sonic platformer. Like Sonic Heroes, each team essentially contains three characters that slot into archetypal 'classes' with obvious benefits - Speed, Technique and Power. In the game's most iconic team these roles fall to Sonic, Tails and Knuckles respectively, for instance. 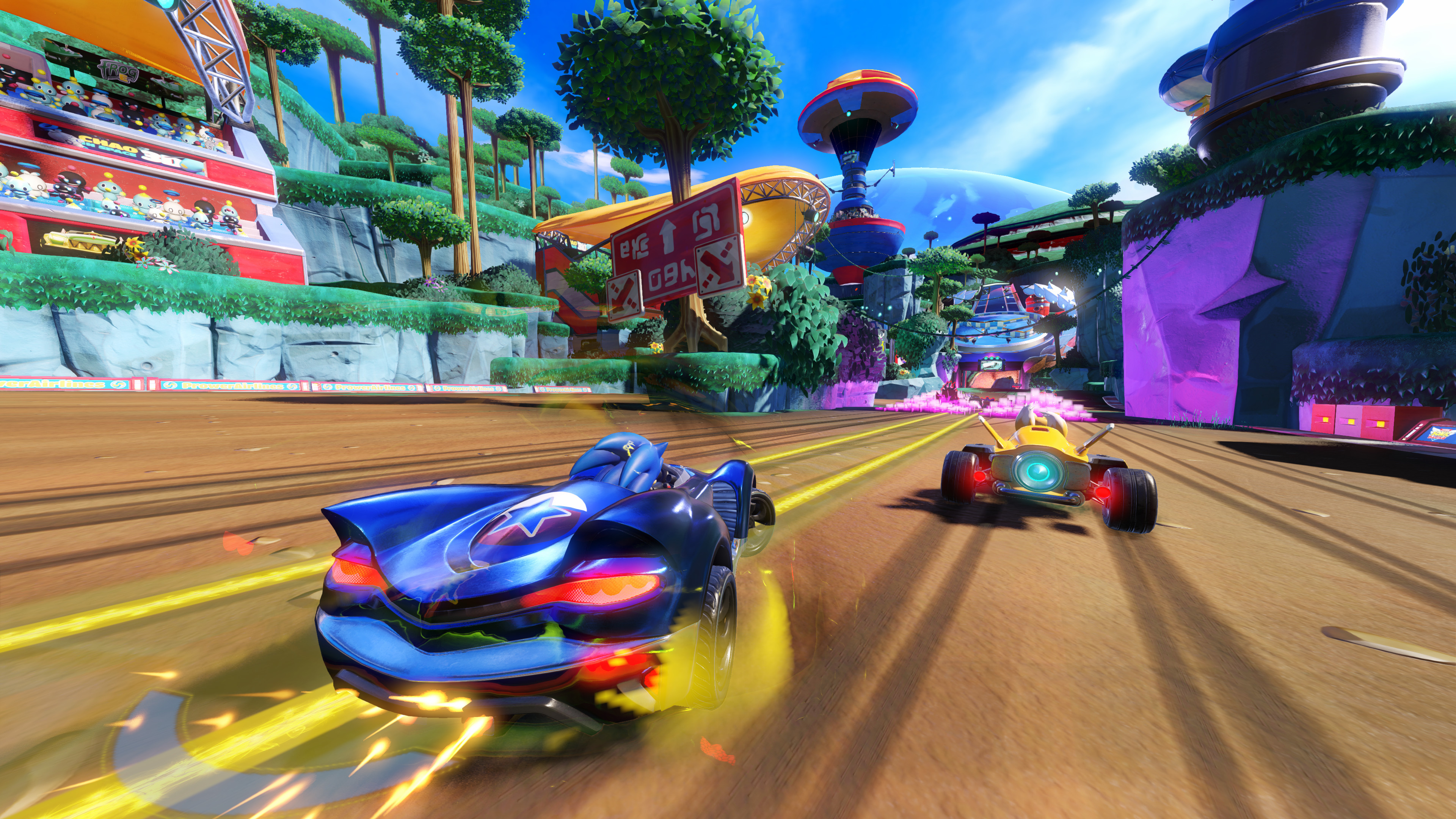 Unlike Sonic Heroes you're not switching between characters, however. You pick one and the others are AI controlled - or you can hand off control to other players for full local co-operative play in pretty much every available mode. It's a neat idea.

Instead of switching characters to progress or solve puzzles, the team aspect of the game is instead focused on helping each other with various team cooperation abilities. The slingshot, for instance, is a move where you drive in the slipstream of a teammate (which is helpfully highlighted) for a period until you get a bonus boost that sends you flying past them and onward up the track. If an ally in front of you is bashed off the road or hit by an item that slows them down, you can drive past them in a close call to execute a Skim Boost, which'll get them back up to speed. The closer you pass, the bigger the boost.

Being a fun and light-hearted kart racer there are also a range of items for mid-race shenanigans. There's a team aspect here too, as if you pick up one that's no use to you a single button press can give your team mates the chance to take it off your hands. All of these actions help the team but also build a special meter that once filled allows you to execute a super move that will massively boost your racing prospects.

The introduction of this team aspect works well and adds a different-feeling wrinkle to the action that sets Sonic Team Racing apart from Mario Kart in a way that doesn't just feel like a gimmick. The slingshot in particular is a great way to integrate one of the best aspects of traditional car racers, slipstream and drafting, into a cute kart racing setting. In general these mechanics have a transformative effect, as you can now go from first to last and back again far more quickly with a bit of clever play on your or your rival's part. The only criticism of all this is that early on the game doesn't do the best job of explaining how these systems and mechanics work unless you pay close attention to loading screen tips.

But, I hear you cry, is it as good as Sonic & Sega All-Stars Racing Transformed? That's this game's lineage, and it's a tough one to live up to, as that game is one of the best kart racers ever. The answer is, well - no, it probably isn't, but that was a high bar to clear. Team Sonic Racing is very successful at its very different style of racing, but the team gimmick perhaps isn't as solid as the transforming vehicles one.

One thing that perplexes me is the decision to pull back from the Sega all-stars concept to only feature Sonic characters and tracks. I realize Sonic is by far the more recognizable franchise, but there was a variety and depth to the worlds the all-stars racers could visit that this game just can't manage. While I know a lot of people under 20 have no bloody idea who Golden Axe's Gilius Thunderhead is, there's nothing here that quite has the mood of several of the areas found in the previous, Sega-wide game.

While Sonic and his friends will always star, there's no doubt that this would be a richer, more varied game if it went further beyond Sonic. I'm not at all convinced even any five-year-old wants to play as the ultimate C-tier team of Vector, Silver and Blaze. In other ways the Sonic theme just seems to make some aspects boring, too - all items take the form of Sonic Colors' Wisps and generally feel uninspired and less fun than a range of recognizable items from a various games.

That isn't to say the game isn't content rich, however. There's an adventure mode with a series of races and challenges held together by a thin veneer of a fully voice-acted visual novel style story. Some of the challenges here are really difficult to get high ranks on, and the three difficulty levels provide a great variance of challenge not just in terms of AI aptitude but also in default car speeds.

Outside of the adventure mode there's your standard four-race Grand Prix as established by Mario Kart, an exhibition mode that allows for more customizable races, a time trial and of course full online play - an area where the team-based aspect comes into its own if you can group up with some friends and actually collaborate properly as a team. 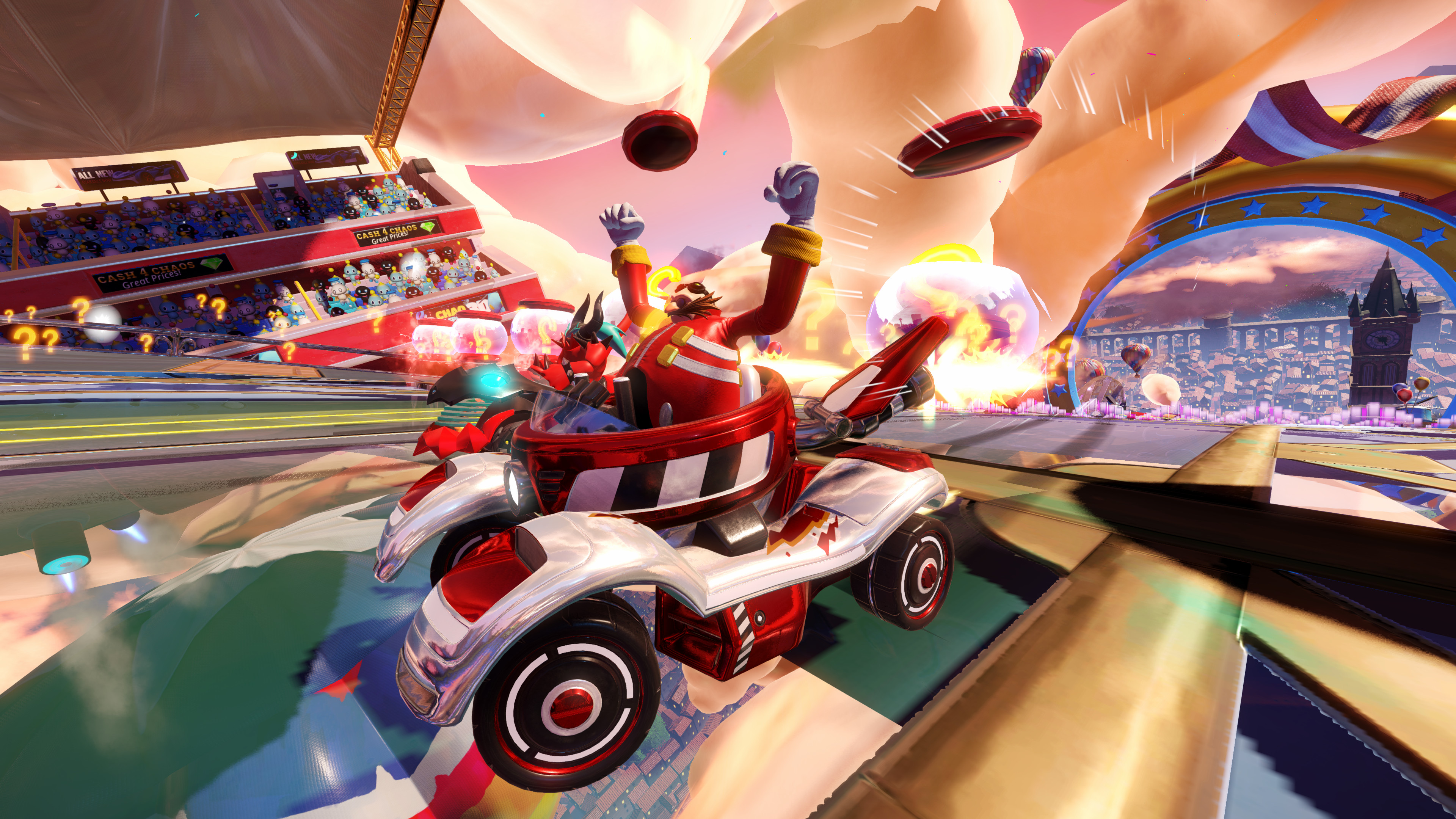 There's even a random-chance random draw system (with no real world money changing hands, to be clear) to unlock customization parts for every car in the game, with parts not just cosmetic but also significantly adjusting car performance.

There's a lot to do, and the handling of the cars and variety of tracks (21 total) is good enough that you feel encouraged to get stuck in and do much of it.

The complaints are relatively few, and all pretty much feel like nitpicks. The game is extremely competent, and as such my biggest gripe feels rather petty - at default settings these characters never shut up. The soundtrack of this game is an incredible suite of head-bopping remixes, but you'll pretty much always struggle to hear them over endless quips and nattering from the racers. Some of these lines serve to feed you information like the fact your super move is ready or an ally needs help, but a lot of the time they're just pointless and annoying. You can mercifully turn this off or even set it to text only, so... Team Sonic Racing even gets this right.

So, there we have it - an extraordinarily competent racer, which makes sense. The follow-up to a game as good as All-Stars Racing Transformed was almost certainly going to be good - though it does feel as if something of the x-factor that made that game truly special isn't quite present here. Kart racing fans or families are sure to have an absolute blast with this, however - and it's an easy recommendation as a result.