Valve announced back in October that Steam has 65 million users. Today, during Steam Dev Days, the firm announced it now has 75 million active users - a massive jump for such a short period of time.

According to an email sent to VG247, over the last three months, Steam accounts jumped 15% with an addition 10 million user, noting the increase occurred during "a busy holiday release season and Steam's Pre-Holiday and Holiday sales."

North America contributed 41% to Steam's 2013's sales revenue and Europe contributed 40%; however, Russia and Brazil realized the largest year-over-year growth with sales in each region up by 128% and 75%, respectively. 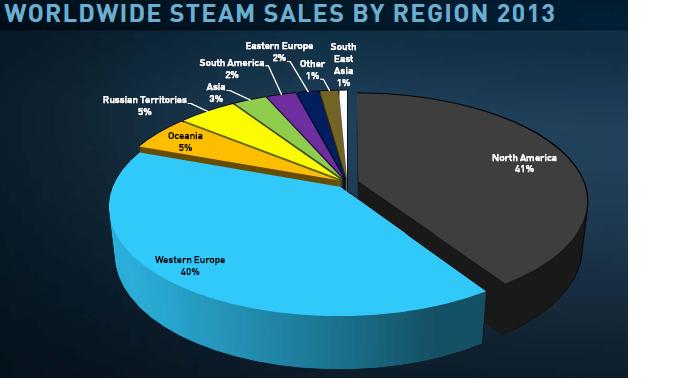 Also revealed at the event, per tweets from Hot Blooded Game CFO Dave Oshry, was Valve's goal of making "Greenlight go away," and not because it isn't working out to the benefit of all, it's just Greenlight will eventually cease to exist due to its evolution.

"Our goal is to make Greenlight go away. Not because it's not useful, but because we're evolving," said firm's boss Gabe Newell during the event's introduction.

The goal is to provide developers more control over Steam and how it is used to promote games.

Once the service evolves, the blocks between development and publishing on Steam will be removed, thus the need for it will disappear.

We'll have more out of Dev Days as news hits. Videos of the Steam Dev Days main presentations will be made available as videos in the coming weeks.