Brenna is never, ever going to give PopCap any money for Solitaire Blitz, and has no idea if this makes her part of the problem, or the solution.

I am supposed to spam my friends, doing PopCap's marketing work for them - and I don't want to. I feel embarrassed by it. It's begging, isn't it? Begging for something insubstantial and low-effort, but begging nonetheless - and playing right into the dirty capitalist brainwashing marketing machine, no less.

I've always liked Solitaire; I like playing cards in general, especially crib and anything where I can cheat like crazy and send my cousins home sulking. Solitaire is a staple of Windows because it is hypnotic, relaxing, brainless and luck-driven, with just enough effort from the player required to win that it feels like there's some skill involved.

I also really like PopCap, the scrappy King of Casual, so it's not surprising that I quite enjoy Solitaire Blitz. It's a very polished little game. The family-friendly sea theme is a bit weird, with its arguably phallic worm mascot seeming to represent the player. The humour can be quite off-kilter, something of a PopCap trademark here left in its raw state rather than carefully polished to focus-group acceptable kookiness as in Plants vs Zombies. The app itself is very slick and comprehensible, unlike the basically dreadful Bejeweled Blitz.

PopCap has built in a really neat little progression system whereby finishing quests (completing a slightly random number of games in a particular location) nets you new decks. This is a purely cosmetic thing but as soon as I had more than one I wanted them all and began a systematic assault.

Here, social gaming's ubiquitous "energy" bugged me; I want to keep playing, not stop and wait an hour for my chips to recharge. But you know what? That's okay. This is a free game. PopCap needs to make money somehow. If the legendary "whales" want to fork out a few bucks a day to play ten turns an hour instead of five, good on them. I'm not going to do that, and probably neither are you, VG247 reader, I suspect.

No, what has my grinding my teeth is the energy system in combination with the paywall between me and the next island. If I want to progress along the map, I either have to pay $2 or entice three of my friends to "crew" with me. 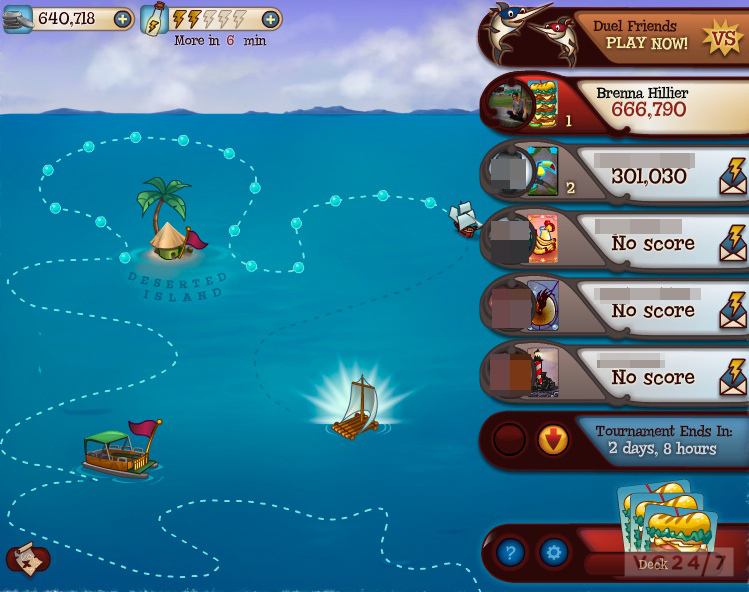 Kicking butt - against people who haven't played this week. Yeah!

$2 is a really small amount of money but there are a significant number of islands beyond this one (even assuming I ever felt comfortable giving Facebook my PayPal credentials, which I don't, because that way lies madness and late night shopping sprees). I have no idea how much it might cost me to access every island in the game and I don't like the idea of going in blind. What if there are five islands, or ten, or 15? I will have forked out $10, or $20 or $30 for a game I'm only allowed to play a couple of times an hour, when the energy system lets me.

Of course, I could just nag my friends - and I actually already have. I know two or three people who also fell for that cheeky mermaid's charms and play on a regular basis (I am beating the pants off all of them in my weekly "tournament" - which I suspect carefully doesn't show me scores for anybody doing better than me, actually, as the names change each week) but even with their assistance I can't get my ship going. In part, this is because the notification system is either broken or confusing enough that my entreaties are ignored; I regularly get notifications that lead nowhere and achieve nothing, and can only assume mine are meeting the same fate. 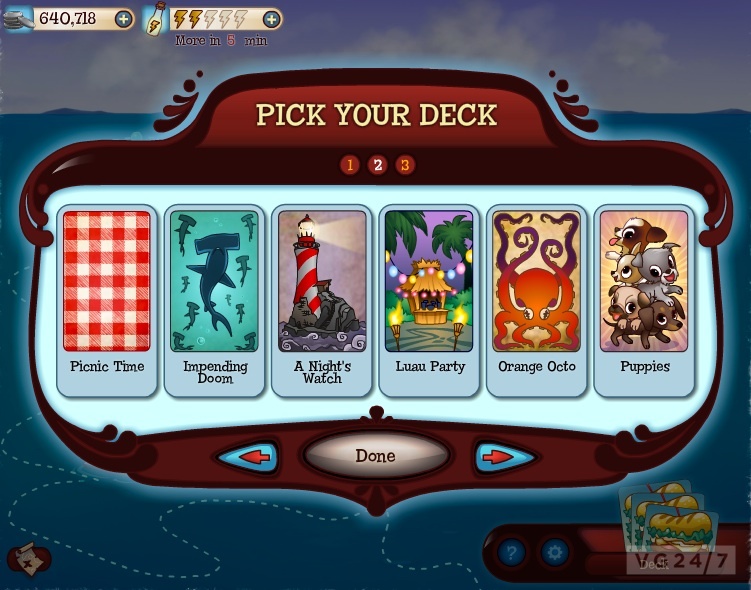 My beautiful, beautiful deck collection. I MUST HAVE THEM ALL.

The rub is that I am supposed to spam my friends, whether they play or not, doing PopCap's marketing work for them - and I don't want to. I hate receiving notification spam, and even though I know that I am quite restrained in my use of social gaming, I feel embarrassed by it. It's begging, isn't it? Begging for something insubstantial and low-effort, but begging nonetheless - and playing right into the dirty capitalist brainwashing marketing machine, no less.

(Not to mention, I catch enough shit about being a "casual gamer" from Mr Internet without plastering my Facebook wall with evidence of my affection for calculating odds, clicking quickly and collecting pretty things. No wonder so many people put Raptr on their social media; the Halo killstreaks look much more acceptable than the high scores in a game about battling cats.)

I don't want to give PopCap money in the way it wants me to give it money, and that is a shame, because I would quite like to give it some money. Solitaire Blitz reminds me quite a lot of Insaniquarium, an early PopCap effort I love, as well as Plants vs Zombies, in that it's carefully constructed to make me want to keep playing until I've got everything - and to enjoy myself along the way. 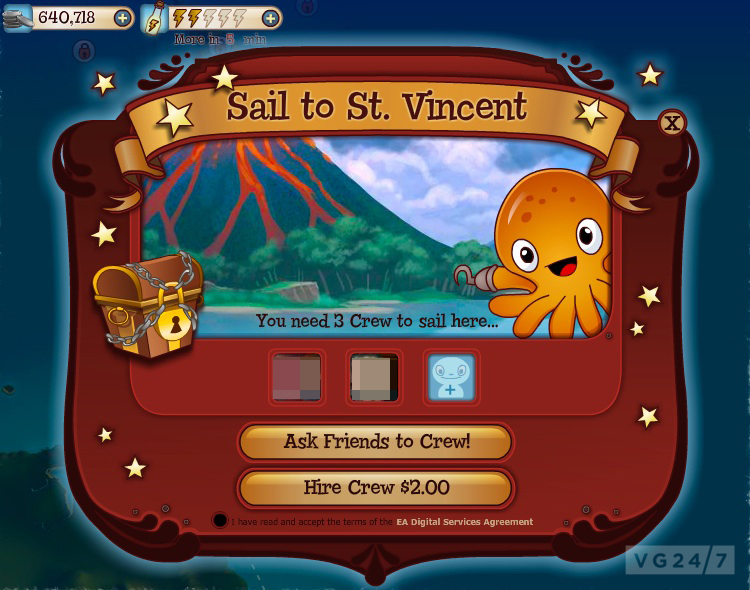 I just want to go to St Vincent.

I paid somewhere between $10 and $30 for both of the games I mentioned - I can't remember the figure, unfortunately - and I'd be more than happy to pay an up-front, one time cover price for a downloadable version of Solitaire Blitz that isn't gated by social notifications, microtransactions, or energy.

I sincerely doubt I'll ever get it. I wonder if I'm just a fossil, and the audience who supported early PopCap games really has vanished, making it impossible for casual downloadable games to make money. Or did the casual and mid-core industry simply forget we exist, in its bid to jump on the lucrative-looking social and micro-transaction gaming bubble?

As I write this, and edit it, I'm still playing Solitaire Blitz. My ship has completed half a dozen circuits around the available islands, and will probably continue to do so; I like playing the game enough that I'll probably keep using my five pops an hour on and off until it goes the way of PlayFish's catalogue. But PopCap won't see a cent from me. Something is deeply wrong here.

Solitaire Blitz is available on Facebook and iOS. It is free - sort of.