You have never felt true pain until you’ve been murdered by an oversized turkey.

FromSoftware’s latest doesn’t give a shit about you. Sekiro: Shadows Die Twice is a game in the mould of Dark Souls, Demon’s Souls, and Bloodborne before it - you explore a strange land filled with things that want to kill you, making gradual progress between manually activated checkpoints. Every fight feels like a proper battle. Every victory is earned.

You play as a shinobi pledged to a young lord during Japan’s Sengoku period. Your mission is to get him back from the bad guys who snatched him away. Being a FromSoftware game, there are also themes of death and rebirth, lifeforce, and mythos that I won’t spoil here. The difference is, this time the protagonist is an actual character with a voice, and the story is told via dialogue and cutscenes rather than only relying on esoteric item descriptions and environmental details (though there’s some of that, too). 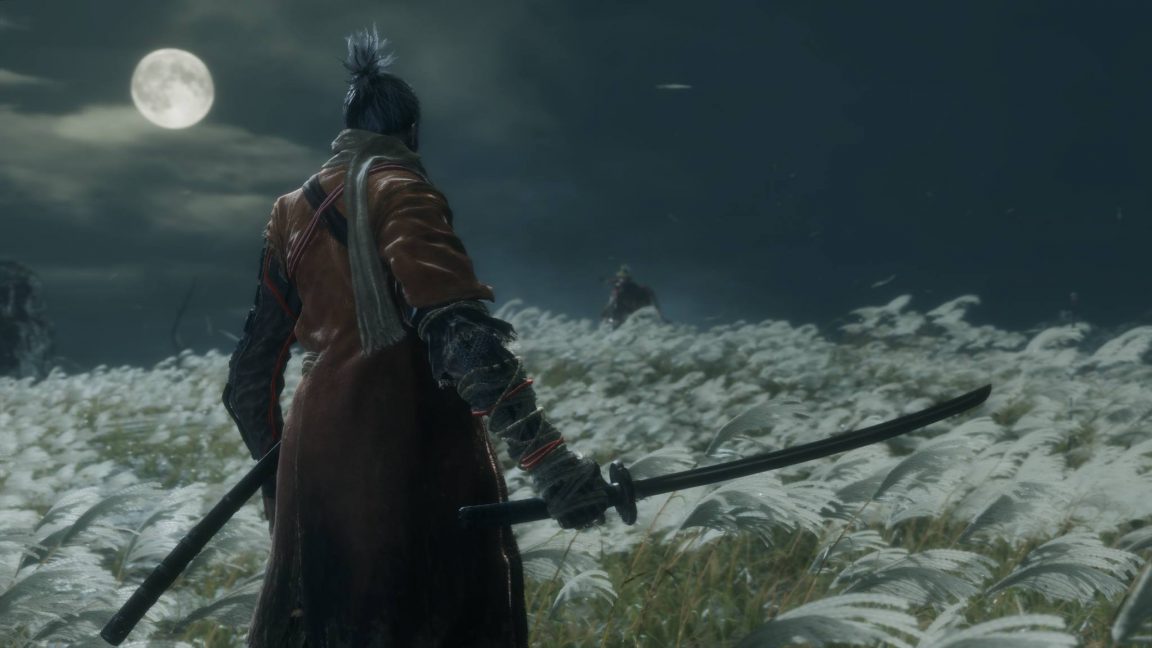 When people talk about Soulsborne games, difficulty is a focal point. “It’s hard, but it’s fair. Every death feels like it’s your fault,” proponents of the genre will tell you. That claim is actually more accurate when applied to Sekiro.

Sekiro doesn’t rely on cheap tricks. The floor won’t give out from under you. You won’t have to navigate a darkened maze filled with giant boulders. It won’t plonk you in the middle of ten murderous mushrooms who will one-shot you. It’s very rare that you’ll be overwhelmed by area of effect attacks. If you fall into an unplayable area, you don’t even die if you have health - you’re just plonked back to where you fell from with a small penalty. You rarely feel cheated and it’s all the better for it. It feels honourable, which is appropriate for the setting.

Dark Souls’ main attraction are its boss encounters: screen-filling beasts with tragic backstories and huge health pools. Most of Sekiro’s major encounters are more akin to Bloodborne’s Gascoigne fight: one-on-one duels where your opponent has similar tools. It’s not about experimenting with setups and pumping experience into stats to get the right build, it’s about testing your skills against deadly and efficient foes. It feels more pure. 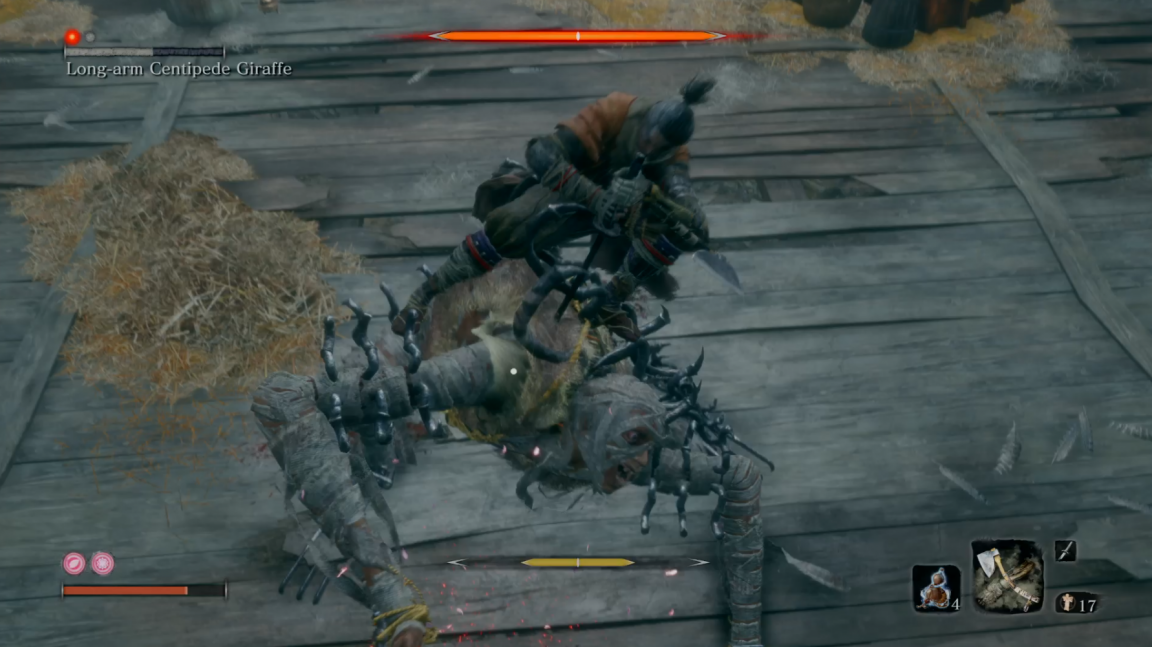 You see, Sekiro doesn’t let you farm ‘souls’ to make yourself more powerful. The only currency here is money and money won’t buy you love (or win any fights). If you can’t wrap your head around the fundamentals of combat, you are screwed. You can’t summon in another player to help you either. The only crutch you have is your agility, which allows you to escape combat with your grappling hook or to get the drop on enemies with stealth, which usually amounts to getting a couple of free kills before combat kicks off. Neither of these things will help you against bosses.

There’s a point in every Soulsborne game where players hit a wall. In Sekiro, that wall comes early and slams into you like a Sen’s Fortress boulder. But breaking through that wall is as exhilarating as setting your eyes on Anor Londo for the very first time.

Rather than being built around stamina, Sekiro is concerned with posture. It’s about guarding and breaking guards. The higher your health, the faster posture recovers - same for the bad guys. If you attack a guard, you damage their posture. Damage it fully - armoured enemies are more difficult to break - and you can finish them with a swift stab to the neck. Some enemies need multiple finishers to be killed. You also need to think defensively. 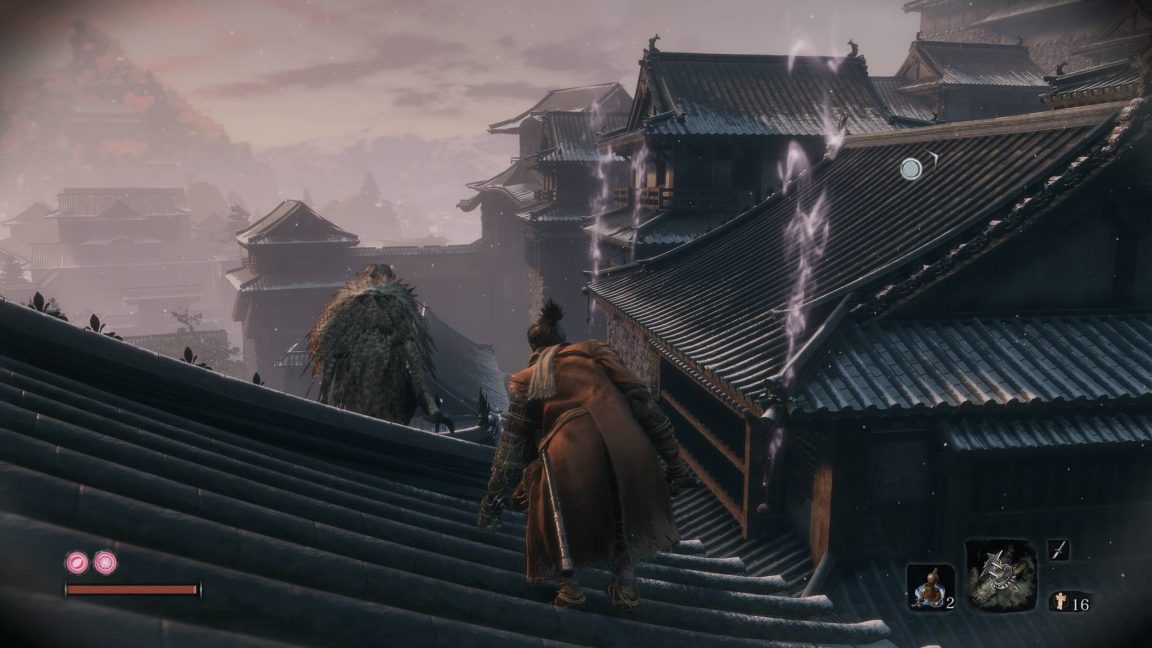 You can’t turtle up like in Souls because you don’t have a shield so the enemy can quickly break through - instead, you need to time your taps of the block button to coincide with your enemy’s attack landing, performing deflections. This also does posture damage if you time it correctly. The enemy won’t just attack once, either - the cadence of blows varies and sometimes comes in a deadly flurry, meaning you have to block ten swift, consecutive strikes and immediately be ready to launch a counterattack of your own. It’s frenetic, but it feels incredible once you get to grips with it. It’s like someone at FromSoftware looked at Metal Gear Rising: Revengeance’s parry system and went, “Yeah, we’ll have some of that.”

Of course, there’s more to it than that. Enemies also have a range of unblockable attacks: grabs, thrusts, and sweeps. Grabs must be avoided by dodging, while thrusts have to be countered by an unlocked skill that allows you to tap dodge while stationary to stamp on whatever is being poked at you. For sweeps, you have to jump - yes, there’s a dedicated jump button - and allow the swing to pass beneath you. You can also jump off the enemy like a goomba to do big posture damage as part of a sweep counter.

Layered over all of this are multiple skill trees. Rather than upgrading your stats by farming enemies, you just unlock new moves. Some are only found by discovering hidden texts buried deep within the twisting, sprawling, much more vertically-minded game world, and some can be unlocked at any time. There are moves that allow you to backflip over a staggered enemy to finish them with a backstab, there are monk-style palm strikes, and even ninjutsu abilities that turn arterial spray into a smokescreen - couple that last one with the flip and backstab for extra cool points. 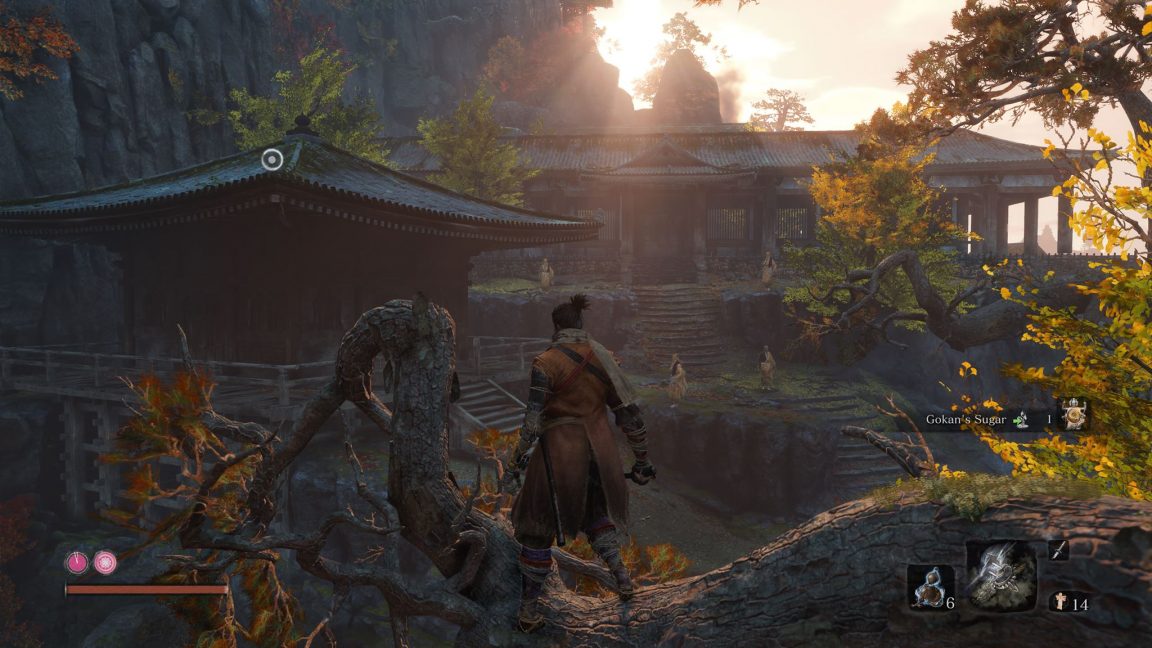 There’s also a bunch of mods for your prosthetic arm, ranging from shuriken to firecrackers and even wind-powered leaves. Many of these can be upgraded to unlock new functionalities, and some of the main encounters can be easier if you have them in your possession. Take one early fight against a mounted samurai: if you have the firecrackers, you can use them to make his horse buck, allowing you to get in some free hits. You find this information out by skulking across the rooftops and eavesdropping on guards, then you just have to find where the hell you get the firecracker attachment from. It might sound like the game holds your hand, but it does not. At all.

Besides a couple of little hitches in some darkened late-game areas - don’t worry, it’s not Blighttown-bad - the game runs incredibly well on PS4 Pro. It’s a good job because you need every frame you can get to keep up with the barrage of strikes constantly coming your way. My only real gripe with Sekiro is how stealth is a bit barebones. You can creep up on people to backstab, you can hide in the long grass, you can jump down from above, and you can ambush people at corners with your back against the wall. There are also ceramic dishes you can fling off as distractions. It does the job and stealth clearly isn’t the focus here, but I would have liked to feel a bit more like, you know, a ninja.

Sekiro is a game a lot of people are going to bounce off. It’s one for the “git gud” crowd - for people who want a feeling of accomplishment, rather than the fake achievement you feel from finding some Level 20 Pants in most modern triple-A experiences. It’s FromSoftware at its most confident, at its most unapologetic. It’s Bloodborne but faster, with fewer crutches yet somehow more fair. It’s also one of the best games released so far in what’s already looking like a strong 2019.

Sekiro is out now for PC, PS4, and Xbox One. Version tested: PS4 Pro - review code supplied by Activision.