Scarlet Nexus appeared to be an anime fan's dream. It had the look, the story, and the combat, but now I've put a significant amount of time into the game, does it deliver on its promise? Let me say that it does for the most part, but it's not without its issues - some of which will grate more if you don't buy into the storytelling or don't stick with the ever-improving combat mechanics.

I've given a thorough rundown of Scarlet Nexus in the video review above, so please do watch that for all the key info, but if you're in a rush and just want to get the final word, here it is: This is a fun game, packed with stylish visuals, an original combat system, and RPG-style progression. This isn't a simple hack 'n' slash, but a deep game with a lot of character interactions and a rather convoluted story.

My enjoyment of Scarlet Nexus benefited from my love of anime, a style the game oozes. If you're not willing to invest in the story, which is told through many, many static cutscenes, you won't get as much out of the experience. I will add that this is a much bigger problem early on, where the game struggles to balance getting you into the gameplay while trying to set up the story to come, alongside a load of characters being introduced. As you progress you'll spend less time watching and more time playing, but the story being told remains a key part of what Scarlet Nexus is. 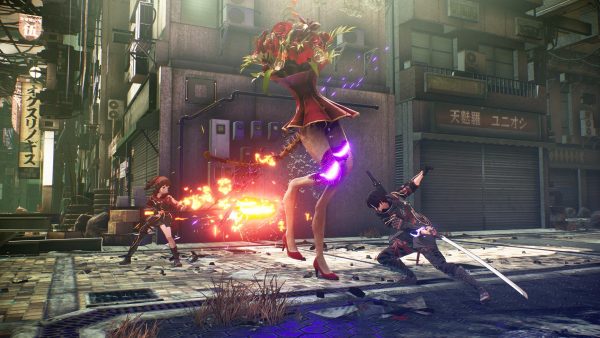 I played through on PS5 and was very impressed with the visual style that's been created. The world is dense, the animations are superb, and enemy design is original in the extreme - there's really little to compare this to, with the organic foes clashing wonderfully with the harsh, modern environments and tech.

Check out the video review for more detailed thoughts, and to get a good look at how the game looks in action, all captured on the PS5.

If you like the sound of a deep RPG with extensive combat mechanics, Scarlet Nexus shouldn't disappoint. If you are expecting something more akin to Devil May Cry, you might find the extensive storytelling gets in the way of the gameplay a little too much. With that said, you can still enjoy it if you're not an anime connoisseur. There's plenty of fun to be had for all players because it's great once it gets going - but I fear it might lose people in its opening few hours.