ModNation Racers: Road Trip is the third of its kind, but it's not just a port. Johnny Cullen talks to Sony San Diego's Brandon Akiaten on the new entry as we continue Vita Week. 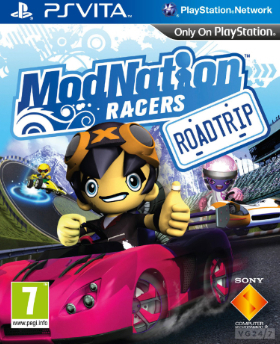 Features the same core concept of Race, Create, Share, this time tied into the unique capabilities of PlayStation Vita.

Fully compatible with custom levels made in the PS3 or PSP versions.

A launch title for PlayStation Vita in Europe and the US next week.

In the past few years, Sony has focussed strongly on the Play, Create, Share genre. What began with the infamous GDC 2007 unveil of LittleBigPlanet later grew to include user-generated content tools in InFamous 2, but its most well-known followup was the June 2009 with the announce of ModNation Racers at E3. Since then, two instalments of the series have appeared: its initial debut on PlayStation 3 in May 2010, and the PSP version which arrived soon afterwards.

This time, Sony finds itself in a unique situation: It's set to release Vita-specific versions of the two most well-known Play, Create, Share titles during launch. I tried LittleBigPlanet at gamescom last year and it looks set to still be the same charming game it has been with its earlier entries on PS3 and PSP.

But while at its core it's still the same game that people have been playing for the past two years on PS3 and PSP, when ModNation Racers: Road Trip launches in Europe and the US next week, it'll prove to be a completely different ballgame, according to Sony San Diego producer Brandon Akiaten.

"We certainly wanted to keep the integrity of the ModNation Racers brand, so the inspiration was strong," Akiaten tells VG247. "The robust racing system, unique art sensibility, and principles of Race, Create, and Share still remain.

"The PlayStation Vita gave us a wealth of tools to help us explore more intuitive and better ways of creating unique content while maintaining the strengths and fun factor of ModNation Racers."

Road Trip will take advantage of some of Vita's hardware features. A few examples are creating landscapes using the rear touchpad when building a custom track, and using touch controls for navigation. According to Akiaten, in terms of those specific Vita features, the sky was the limit.

"The thought was more like, what can’t we do," he says. "When you are provided with a tool that provides faster processing, better graphics, right analog stick, two touch screens, huge OLED display, the ideas start racing - no pun intended."

As well as the hardware capabilities, there's also the social aspect. As I mentioned when I previewed the hardware when I first got it back in January, Sony has been pushing Vita's social side very hard since gamescom last year, leading with it in its press conference in Cologne, at Tokyo Game Show and at Eurogamer Expo. Besides Facebook, Twitter and Foursquare coming to the handheld, there'll also be Sony's version of Streetpass in the form of Near, which ModNation Racers supports - but it goes beyond mere social networks with content sharing.

ModNation Racers: Road Trip has an
editing suite to rival the PS3 version.

"In a day and age where the world is becoming more and more socially connected through electronics, it is imperative that devices have some sort of online connectivity," says Akiaten. "Without this connection, sharing with people around the world at the capacity we promote would be impossible."

So ModNation continues to go from strength to strength, as will LittleBigPlanet when it comes to Vita after launch. The two key IPs in Sony's Play, Create, Share arsenal will form part of its games strategy. Unlike LittleBigPlanet, which now has a Karting spin-off on the way, the future of the ModNation Racers is not yet certain. But one thing we do know is this: the Play, Create Share will continue to grow further and further, as Akiaten explains:

"Without a doubt, I see this genre expanding to great levels. This gives the end user the opportunity to put his or her personal stamp on their game experience, along with sharing it with the world.

"Long gone are the days of the shrink wrapped game experience. Everybody has their own creative spirit, and games like ours gives people the chance to discover it."

ModNation Racers launches on February 22 in Europe and the US alongside PlayStation Vita.