Octopath Traveler is a beautiful, challenging and often utterly brilliant throwback to the golden age of Japanese RPGs - but significant structural problems hold it back from being a true classic.

There's a lot of buzz around Octopath Traveler, and for good reason - when the developers of a game claim it's designed to be a love letter to the golden age of one of the most significant and beloved genres around, it's no surprise that fans sit up and take notice. Square Enix has had a crack at these throwback RPGs a couple of times recently with the likes of I Am Setsuna and Lost Sphear channeling games like Final Fantasy 6 and Chrono Trigger, but Octopath feels a little different to those games. It's more grand, and seems to have a far stronger unifying vision behind it - and that's especially exciting.

Octopath's closest sibling are the well-liked Bravely Default games over on 3DS, though this is a grander affair. Its visual style calls back to Final Fantasy 6 in particular, with similar sprite work cleverly layered across partially 3D environments to make a game that feels like those SNES-era classics even if in execution they're completely different. Combat is an old-school affair too - heavy on the grind, with a simple turn-based system that hides considerable depth that it's necessary to breach in order to tackle the hard-as-nails, tanky bosses. It's all wonderful - but aspects of Octopath Traveler work far less well, and the deeper I got into the game the more what it was missing nagged and hampered my enjoyment.

A beautiful, challenging and often utterly brilliant throwback to the golden age of Japanese RPGs - but significant structural problems hold it back from being a true classic.

Octopath Traveler might just seem like your usual Square Enix JRPG nonsense name, but it actually has a very specific meaning: there are eight characters (thus octo, from the Latin for eight), and each has their own unique path through the game's world. Everything is built around this - rather than some deep, over-arching world-saving plot, Octopath Traveler is instead eight smaller, unique stories about each of the cast. The game is open-ended, so you can choose any of the eight to start with and then engage the others in any order you like. Each character's story is split into chapters, so theoretically with a lot of grind you could move from chapter one to two and beyond with just a few characters, or you could recruit all eight by playing through all eight chapter one stories one after another.

This method of storytelling is actually a fabulous idea, and it's lovely to see a game of this type that's focused on smaller character conflicts rather than saving the whole world. Cracks begin to appear in this structure pretty quickly, however. Because you can tackle them in any order, every chapter one is roughly the same, thus seeing the flow of the early game turn painfully predictable. Because the game doesn't know if you're going to complete everything before moving deeper into an individual character's story you're forced to grind character levels to remain competitive on many quests - and because characters not in the current party of four don't earn any experience any time you swap somebody new in you're forced to grind them up to scratch. You can't stick with one reliable party of four, either, as each character has to be present in battle for every chapter of their personal quest line.

All of this is disappointing, but most frustrating is how the actual cast of characters get along - which is to say they don't, really. Because of the open-ended nature of the game, the developers have no idea what party members will be present in any given quest other than the one character that specific quest is about - and so rather than write a bunch of dialogue, the others just remain silent. Brief skits in the style of Tales Of and Fire Emblem provide a little one-on-one character interaction from chapter 2 on and there's a tiny bit of cross-over interaction between a few stories, but in real terms the cast of Octopath Traveler don't really interact. It feels as though these characters are adventuring together for no reason - it feels like they wouldn't know each other's names, in fact. For me, this sucked much of the joy out of the otherwise well-told individual stories, and it honestly feels like the developers may have simply run out of the time and cash needed to inject proper party interaction into such an open-ended story. 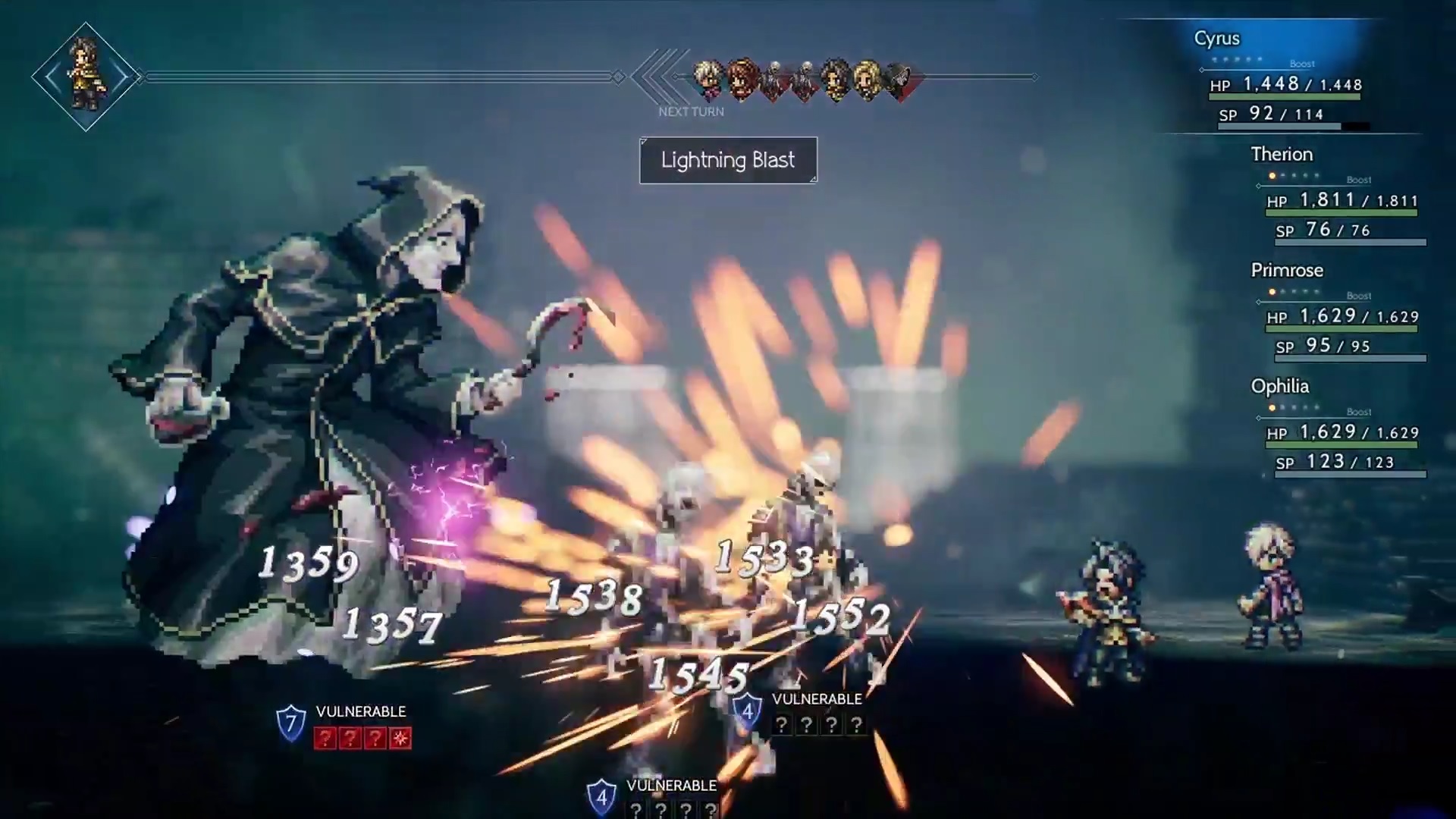 Despite the story problems I kept playing, however. Octopath Traveler's combat is a pleasingly complex web of strengths, weaknesses and different character classes that play off each other brilliantly. The key pillar of combat is the ability to 'break' enemies - that is, to hit them with attacks of a type they're weak to until they're put into a stunned state where they can't act and take additional damage. Octopath's bosses are really challenging, but little feels as satisfying as locking a boss down in a loop of stuns repeatedly, preventing them from acting so that you can wail on them. This isn't an easy feat, however, and that's what makes it rewarding.

The game drags you into battles and hooks you, properly getting the blood pumping in a way that only the best turn-based games can.

As the game wears on you'll be able to unlock a second class for each character and swap them at will - and while the active abilities of a class don't remain if you swap it out, the passive abilities you earn do stick around. This then allows you to equip a broad range of buffs to create truly unique character types, and later in the game more advanced classes that really allow for some significant boosts can be found. A lot of this is open-ended, too - it's easy to miss the shrines that give extra classes out there in the overworld, so you're thus encouraged to explore by this more than by the run-of-the-mill side quests on offer.

Battles really are a highlight of Octopath Traveler - they're tactical and fun, and while the character battle barks can get a little grating the music is absolutely phenomenal. The animation is more like SNES games, so don't expect much movement, but there's gorgeous particle effects and some really impressive sprite work, especially on the bosses, all of whom tower over you at ridiculous, threatening sizes. When at its best the game drags you into battles and hooks you, properly getting the blood pumping in a way that only the best turn-based games can. I could stand to see battles move a little more quickly, but they move at a decent clip as it is. 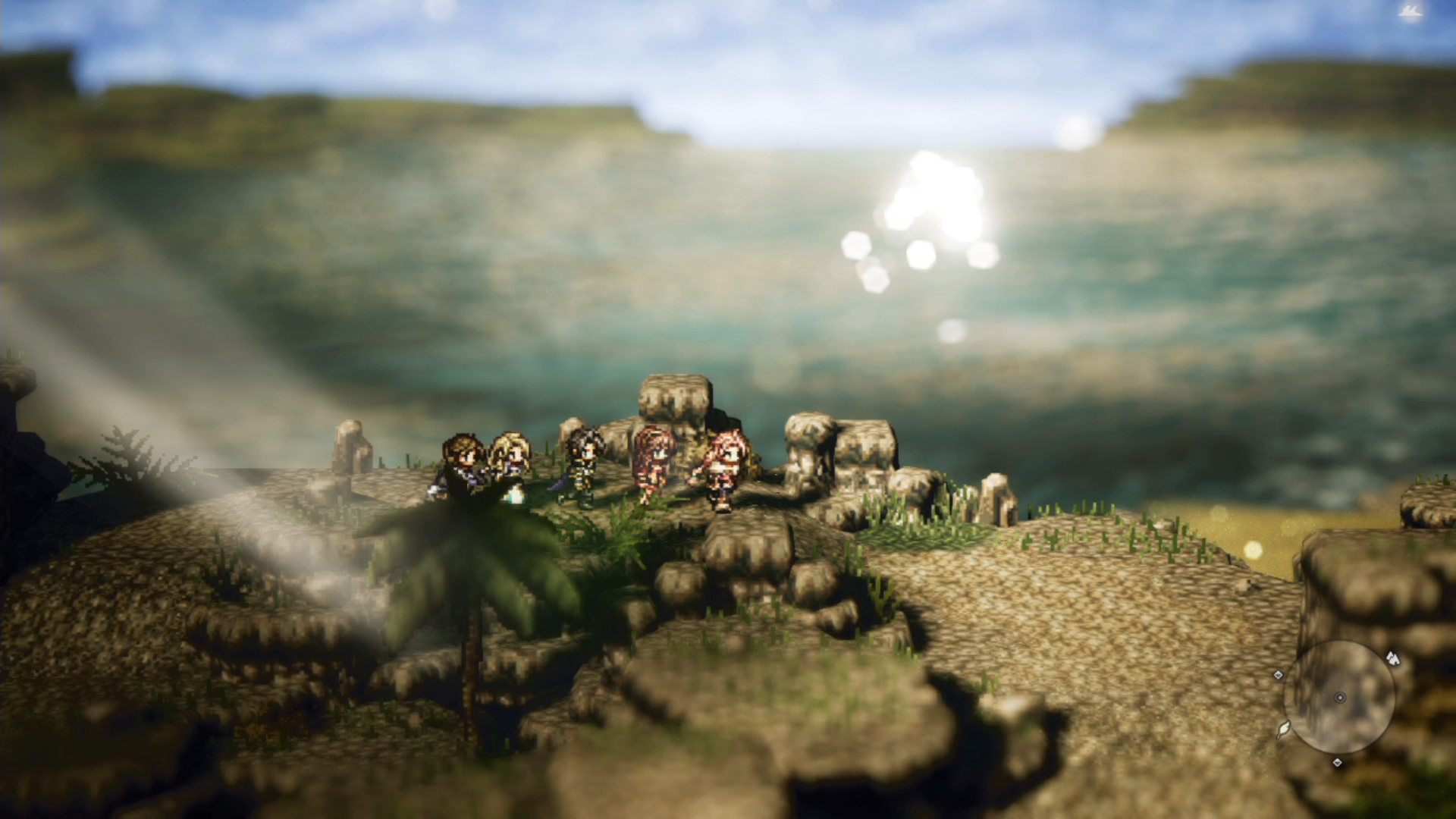 The gorgeous visual design continues outside battles, with the art style that the developers dubbed 'HD-2D' perhaps a new gold standard for the presentation of sprite-based RPGs in the modern age. It would've been so easy for this game to use naff 3D models or awful smoothed-over sprites, but instead it does something a little in between. 2D sprites are treated to lighting effects from Unreal Engine 4, and the environments are just luscious. It's one of the best 2D throwback games ever made visually - even though the perspective sometimes causes a little bit of confusion when navigating hidden pathways in dungeons and the like.

It's just that damn story structure - it's the design equivalent of a bucket of cold water being poured over a product that's otherwise sizzling hot. The problem, to be clear, isn't the lack of a large over-arching plot, it's the lack of character cohesion. Early on this doesn't bother, but the deeper you push into Octopath Traveler and the longer you spend with these too often mute characters the more pronounced these problems become. Slowly that issue evolves from a tugging nag to a genuine problem with how the game conveys its story - because in this genre, story is typically the thing that primarily keeps you pushing on. To be honest this also speaks to Octopath's mechanical systems, mind: I kept playing to see where they led, as the narrative failed to hook me much at all.

So that's Octopath Traveler: a beautiful, challenging and often utterly brilliant throwback to the golden age of Japanese RPGs that somehow scuppers its chances of being a true classic through an ambitious but ultimately flawed narrative structure. That open-ended story design pushes the game to be grind-heavy and, worse, fails to do its world, characters or the rest of the game in general justice. Hardcore and lapsed Japanese RPG fans should absolutely look into this, as it's a joyous experience for anybody who remembers that magical era for console RPGs in the mid to late 90s - but a true, perfect successor to those seminal games this is not.