Lauren Wainwright talks to Nintendo and others as 3DS slams into Europe ahead of its US launch on Sunday, finding the manufacturer bullish and the fans wowed by core gaming's biggest portable launch to date.

Hit this for everything you need to know about this weekend's western 3DS launch.

3DS is Nintendo's glassless 3D entry into the handheld market.

It sold more than 400,000 units in its first weekend in Japan last month.

Nintendo’s 3DS received a rather scattered launch as we saw retailers on Oxford Circus battle it out with pre-order bonuses to draw crowds in. It was HMV’s official Nintendo launch, however, that attracted the most attention. Capcom’s very own Yoshinori Ono was on hand to battle excited gamers waiting to get their eager mits on Nintendo’s latest handheld.

The most dedicated of fans had been queuing since 1.00am to secure his place in the line. Marwan Elgamal, 21, managed to grab the prestigious first spot, and was later whisked away to Nintendo’s launch party for some well deserved drinks. Marwan isn’t new to being first at midnight events, claiming the first spot for the Wii launch in 2006.

We spoke to him as he queued outside the store as to what drove him to line up for 3DS.

“I just love Nintendo," he said. "I played the 3DS and it’s just amazing, the innovation in it. Nintendo's always pushing the technology forward, and it just made that gaming experience that much better. I just really want it.”

The remaining fans were treated to goodie bags of Nintendo-themed plushies, space blankets and t-shirts. Chocolaty goodies and Nintendo-branded umbrellas were carefully thrown into the excited crowd. Punters were also offered the chance to get on stage with Street Fighter producer Yoshinori Ono and battle it out in front of the crowds before the launch countdown began.

Veneet Mehta, 18, had been waiting in line since 6.00pm. Joined by his friends and donning a Mario hat, this was his first midnight launch. 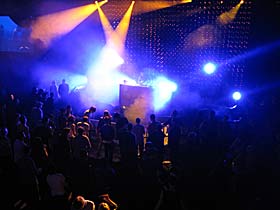 “I played 3DS at the tour, and I’ve played it in GAME multiple times. I have to get this console," he said.

The first 500 in the queue were given a free game alongside the console, but turnout was looking fairly weak as only 82 wristbands were given out by 8.00pm. Fans kept in good spirits by swapping their goodies around, playing DS together and having a Mario-themed sing-a-long to pass the time .

Nintendo familiars Mario and Luigi turned up to cheer on the crowds and pose for pictures. Hundreds of passersby stopped to snap the famous plumbers, who danced for members of the queue.

It wasn’t until around 11.00pm that the cold crowds were eventually escorted into the store and were treated to coverage from the VIP party in Old Billingsgate and matches between the public and Yoshinori Ono on Super Street Fighter 4 3D Edition hosted by Nintendisco. Yoshinori Ono took no prisoners and pretty much destroyed each challenger who braved the stage.

Dan Seto was one of the lucky few to give Ono-san a run for his money on stage.

“It was an honour [playing with Yoshonori-san]. Things like this make midnight launches worth going to. playing against Ono-san made my night!”

We asked Dan why he didn’t order the console online and instead chose to come to the midnight launch.

“It is a little more expensive, but you’re paying for the fact you’re coming to an event," he said. "It’s not very often that a whole new console gets launched, so it’s just to be part of that.

"Things like this make midnight launches worth going to. Playing against Ono-san made my night."

“I thought the vibe was amazing today. Having the legend himself Mr Ono there really added to it,” said Nintendisco’s Nicky Biscuit, who was hosting the stage event in HMV.

Nintendisco, a Retro Gaming Club that runs gaming-themed nights out in London, was also looking at supporting 3DS at future events.

“Really enjoying StreetPass," Biscuit added. "It’s weirdly exciting collecting Miis. We will be having a StreetPass event at the next Nintendisco.”

With only an hour to go until the 3DS was on sale, we sat down with Nintendo UK’s Robert Saunders on how he felt the launch was going.

“Reactions have been phenomenal. I think it’s safe to say it’s been far above and beyond what we expected. We always knew it would be well received and go well but I think we’ve been blown away with just how well it’s gone," he said. 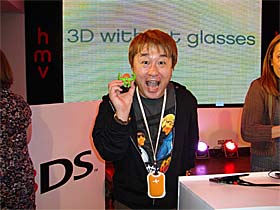 Saunders said he believed it’s a welcome sign for portable gaming as a whole, and while some are worried that tablet and mobile gaming will quell any interest in gaming handhelds, “it shows there is a demand there for the kind of in-depth, immersive, incredible experiences you only get on Nintendo consoles,” he added.

Soon after, Marwan finally approached the till to pick up his 3DS. After 10 minutes of holding the console to the media, the countdown to midnight ended and HMV debited his card. He held the console up high to a barrage of pap-flash before finally walking out, the UK's first 3DS owner.

The rest of the crowd made its way to the tills, everyone beaming with excitement despite the long wait outside in the cold.